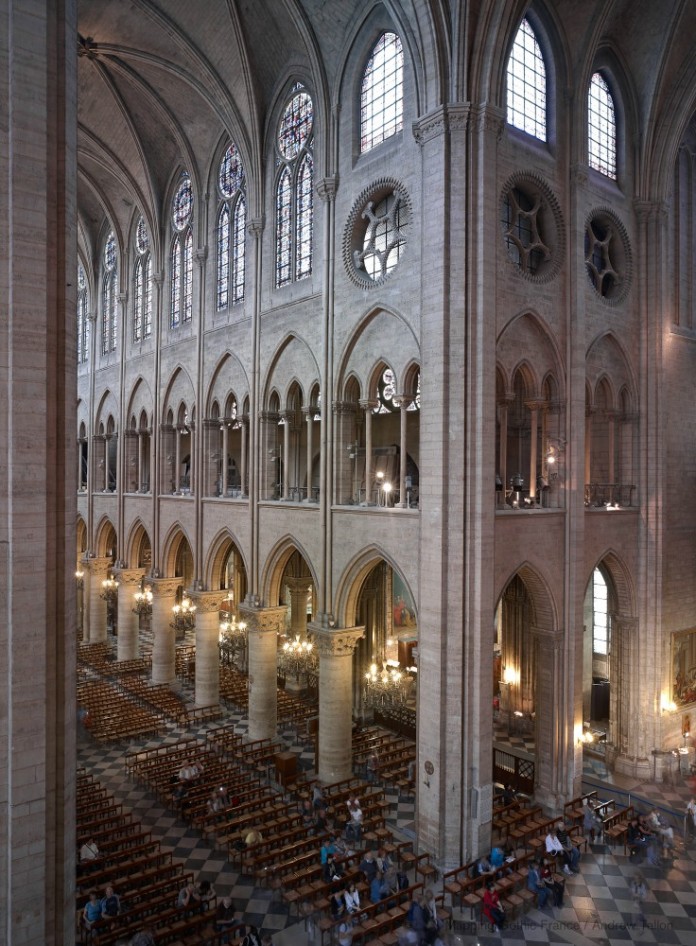 With an average of 35,000 people passing through her doors every day, Notre-Dame de Paris is one of Europe’s most visited monuments. The landmark cathedral on the Île de la Cité, which survived the French Revolution and was saved from demolition partly thanks to Victor Hugo’s The Hunchback of Notre-Dame, is a masterpiece of French gothic architecture. But many of these splendid details were hidden from the general public… until now.

In his research, Vassar College Professor of Art Andrew Tallon uses new imaging technology to reveal previously unseen views of Notre-Dame (and other French cathedrals). These 360-degree interactive panoramas, three-dimensional images, and detailed laser scans provide an in-depth perspective that’s much richer than a photo or in-person visit. For a fun perusal, be sure to check the website gothicstructure.org.

Tallon practised his diplomatic skills and then made some tricky climbs to get these images. Of Notre-Dame, Professor Tallon says, “It might be the hardest building in the world to visit! It’s owned by the French government, located in the City of Paris, and used by the Archbishop — everyone has a hand in the building. The first time, I was given permission to tag along with a group of firemen who were climbing to the upper reaches in order to inspect the fire system. I had to dash to keep up with them, but it was still extraordinary.

“This was a building I’d been interested in (perhaps even “obsessed with” would be appropriate) since having visited it as a nine year-old kid, and now I was in the upper parts! After I’d gained the trust of the building architect and then the Cathedral staff, I was allowed to visit more freely. Imagine being given the key to Notre-Dame — or keys, as it turns out, since you need not just the passe-partout or skeleton key to get up above the vaults, but a series of Quasimodo-sized keys that look as if they’ve survived from the Middle Ages (or at least the 19th century).”

Professor Tallon returns to Paris soon for the June 1 opening of an exhibit called Notre-Dame de Paris: Neuf Siècles d’une Cathédrale, which charts the construction and reconstruction of the cathedral over nine centuries.