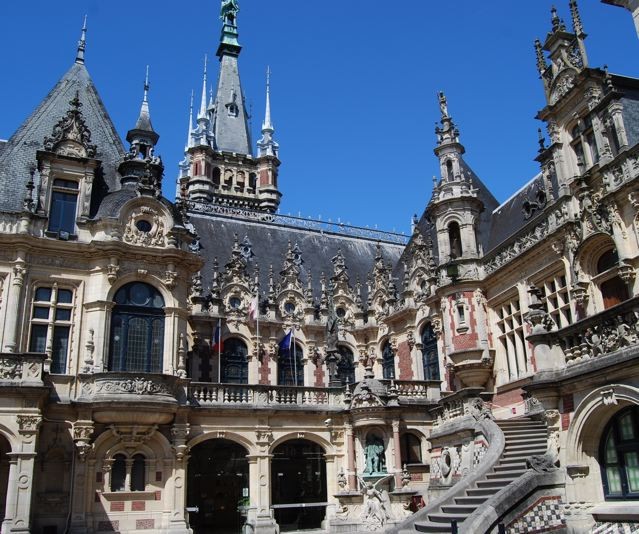 Although the 80-mile stretch of sheer cliffs between Dieppe and Etretat, in upper Normandy, is mirrored by those of the English coast of Dover, pointing to their shared geological origin, no other section of the French shoreline resembles the unique breathtaking seascape of La Côte d’Albâtre—the Alabaster Coast. The section around Fécamp also goes by the poetic name of le Pays des Hautes Falaises (high cliff country) conjuring up the flavor of salty air and the shrieks of circling gulls. Unsurprisingly, the coast attracted a plethora of famous painters and writers in the 19th century, especially the Impressionists, who were captivated by its ever-changing light. Although alabaster refers to the chalky whiteness of the cliffs, closer examination of them reveals a more diversified palette of black and ochre flint and of salty rust, not to mention the bruises of erosion brought about by the relentless assaults of sea, rain and gale-force winds.

Above the cliffs, the plateau of the Pays de Caux (from chaux, chalk) forms a natural promontory, providing endless bird’s-eye views of the coast. Inland, it extends towards Rouen, its open farm fields sheltered from the winds by strategically planted rows of beech trees. Come May, the plateau bursts into bright yellow carpets of rapeseed, followed in June by tender blue flax blossoms. Here and there verdant little valleys or miniature gorges, known as valleuses, carve their way through the plateau towards the sea. When perched above sea level, they afford vertiginous views over the cliffs before opening out into little shingle beaches.

Try the Valleuse de Vaucottes, between Etretat and Fécamp. You can reach it from Vattetor-sur-Mer and through the Bois des Hogues, or along the coast, coming from Yport, which was a small fishing village when Monet arrived to paint it. North of Fécamp, there’s the Val de Mer, which runs to the beach from Senneville-sur-Fécamp, a typical Norman village, featuring attractive brick-and-flint houses. Follow the footpath down the slope and continue down the steps. (Years ago you would have had to make do with a simple ladder fixed to the rock.) My favorite beach, les Petites Dalles, boasts little huts from bygone days.

Fécamp, too, started out at the mouth of a depression, where the bucolic Ganzeville and Valmont rivers meet and flow into the sea. It was the capital of the duchy of Normandy until the Norman Conquest of England in 1066, when William of Normandy, who inherited the English crown from his cousin Edward the Confessor, sailed across the channel with a full fleet to defeat Harold, the pretender to the throne, at the Battle of Hastings. The following year King William the Conqueror threw a sumptuous banquet here, astonishing the local citizenry with “garments woven in gold thread”. The abbot of Fécamp supported William by helping to build the fleet, and William rewarded the abbey by granting it favored status in England, including the possession of Winchester and Rye. Today the Sainte Trinité abbey church, a magnificent early Gothic monument, stands guard over the abbey ruins.

Fishing was Fécamp’s main activity until the 1970s. The harbor is situated at the mouth of the two rivers, in the center of town. On Friday, Saturday and Sunday mornings you may see the fish unloaded on Quai Bérigny and sold by the fishermen’s wives. On Saturday mornings you can also visit the weekly food and flower market. And every day you can buy fresh seafood at La Marée or dine at the upstairs restaurant.

The town’s prosperity is recorded on its handsome brick-and-flint facades, but you will want to visit the Newfoundland and Fishing Museum to learn more about the hard lives of its fishermen, who braved the sea to fish for cod in the icy waters off Newfoundland. Many never came back. On St. Peter’s Day (Saint Pierre des Marins), the first Sunday in February, Mass is celebrated in their honor at the 16th-century church of Saint Etienne, worth a detour. But it is the chapel of Notre Dame de Salut that the fishermen really called their own. Perched on top of the Cap Fagnet, 300 feet above sea level, it is the coast’s highest point, an invaluable strategic spot throughout the ages, as witnessed by the vestiges of a Gallic oppidum and several German blockhouses built in 1942. Today five wind turbines supply energy to 10,000 Fécampois—50% of the town’s residents. You can start off from Quai Guy de Maupassant and climb up the Seamen’s Trail (la sente des matelots, which follows an ancient Gallo-Roman path), to the chapel, a site often painted by Monet. Inside the chapel are ex-voto offerings left by fishermen over the years together with their prayers.

Today Fécamp owes its fame to Bénédictine, the celebrated liqueur that was developed here in the 1860s by wine merchant Alexandre Le Grand, based on an early 16th-century herbal brew distilled by monks. Whether or not his name was predestined, Le Grand had grand ambitions, not the least the building of a flamboyant, neo-Gothic and neo-Renaissance palace for his beloved liqueur. Today it still houses the original 19th-century distillery and a section devoted to the 27 spices used to produce Bénédictine. These are displayed in a huge hall in ravishing patterns of multiple hues, wafting aromas for all to enjoy, although the actual recipe for Bénédictine is kept secret. A patron of the arts, Le Grand turned his exceptional collection of medieval and Renaissance sacred art into the Musée des Beaux Arts, also housed in his palace. The visit ends with a tasting under the magnificent glass-and-iron canopy of the winter garden.

Ten miles south of Fécamp, Etretat displays nature’s workings at its most miraculously beautiful but also at its most fragile. After all, Etretat’s world-renowned needle rock and gateway arches are no more than the surviving ruins of a perished cliff. As you hike this spectacular section of the coast, do not wander off the marked trails. Erosion is a constant reality here.

Etretat was a simple fishing village that gained some small renown because its oysters were appreciated at the court of Versailles—it’s said that Marie-Antoinette adored them. Then in the 19th century, when sea bathing became a craze, Etretat was suddenly on the social map—especially after 1847, when rail service began between Le Havre and Paris. Le tout Paris gathered here in their fancy clothes, joined by the literary and artistic crowd, including Corot, Courbet, Delacroix, Victor Hugo and Guy de Maupassant, who had spent his childhood here. Author Maurice Leblanc, creator of the gentleman burglar Arsène Lupin, had his summer home here, now a small museum honoring both the writer and his fictional anti-hero.

Monet was disgruntled by the influx of Parisians, but he would be even more so today during the high season, when the whole area is overrun by tourists. Prefer spring or autumn weekdays instead. Visit the 12th-century church of Notre Dame and wander through the old wooden covered market, now taken over by crafts and regional produce. For the best of Etretat, make your way to the cliffs painted by so many artists over the years. The hikes along their crest afford stunning views and superb conditions for bird watching. Also laid out on top is a glorious 18-hole golf course, challengingly exposed to the winds.

On the northern end of the coast, not far from Dieppe, lies Varengeville-sur-Mer, the other jewel of the Alabaster Coast. Head there via the seaside town of St-Valery-en-Caux, with a detour to its poignant Franco-British military cemetery. Then make another detour to lovely Veules-les-Roses, home to the tiniest river in France. Victor Hugo spent time here, in a house that’s now next to a panoramic seafood restaurant named after him, high above the sea.

Varengeville is a verdant haven above a chaos of crumbling cliffs. A series of valleuses—Petit-Ailly, les Moutiers, Vasterival—some of them veritable gorges, connect the two worlds. Victor Hugo, Delacroix and Flaubert all succumbed to the beauty of the beaches below and the bucolic village above, and spread the word. Already in the mid-16th century, Dieppe’s wealthiest ship owner built a beautiful Renaissance mansion, le Manoir d’Ango, now open to the public between May and September.

It was in Varengeville that the marine painter Eugène Isabey painted his Beach at Low Tide, now in the Louvre. Later Miró would paint a fresco, in the same house that Isabey occupied, for another tenant, the American architect Paul Nelson. Alfred Roll’s portrait of the farm girl Manda Lametrie, Vallotton’s Landscape Underwood, and Monet’s Customs House all were painted around Varengeville. It was here that Renoir and Pissarro “filled their hands with sun and mist in order to throw them on the canvas”, according to Maupassant. Georges Braque designed a stained-glass window for the village church, portraying the Tree of Jesse, and three others for the chapel of Saint Dominique; he also designed the mosaic for his own tombstone, in the church’s small cemetery, depicting a soaring bird.

Varengeville’s discreet architecture is often concealed behind mature trees. Crowds do arrive in high season, but since the village is not cluttered with eateries and souvenir shops, it has remained unspoiled. The Bois de Moustiers, a glorious estate created by Guillaume Mallet in 1898, embodies the spirit of Varengeville. An admirer of English gardens and of the Arts and Crafts movement, Mallet called upon celebrated architect Edwin Luytens to design the house and landscape artist Gertrude Jekyll for the gardens. Their immense talent, the position high above the ocean, the spirit and culture of the residents and their guests, made Moustiers a unique domain. It still belongs to the same family, and is open to visitors from March 15 to November 15. In May and June it is ablaze with hydrangeas, azaleas and rhododendrons.

Originally published in the July/August 2008 issue of France Today; updated in July 2012