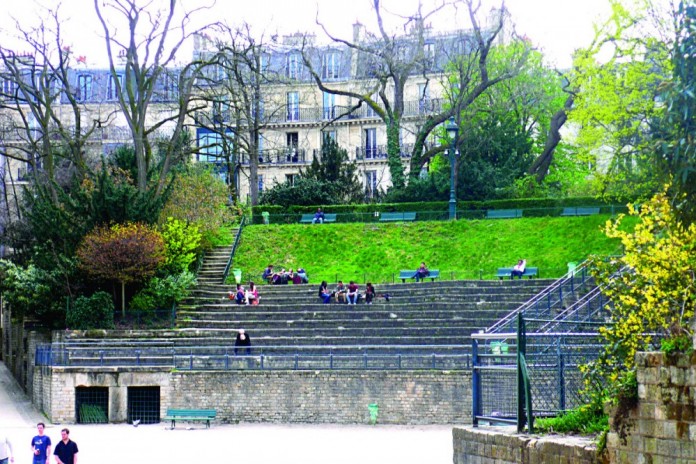 Should I ever be asked to name France’s stellar poet, I would have to agree with André Gide when he said, “Victor Hugo, alas!” Besides engaging in every poetic genre, Hugo was a novelist, dramatist, essayist, pamphleteer. He is France’s most published author to date, while internationally, he is known for his novels The Hunchback of Notre-Dame and Les Misérables, both set in Paris. The enduring box-office success of Les Mis, both at the theatre and recently on the big screen, would not have displeased the man who, unabashed, had his furniture emblazoned with the self-created motto, Ego Hugo!

A larger-than-life phenomenon, Hugo’s writing was intertwined with the career of a parliamentarian, fighting battles on all fronts: for the abolition of the death penalty, against poverty, and for liberty. Heaven knows how he found the time to also travel extensively, leave a legacy of 4,000 drawings and various pieces of hand-carved furniture, now on display in Hauteville House in Guernsey and in his museum in Paris. His sex drive was also on a par with the rest – witness his wedding night, during which he is said to have “honoured” his wife nine times, followed by an unflagging sex life with all and sundry, endured by his lifelong mistress, Juliette Drouet, who resigned herself to finding comfort in their exchange of some 20,000 love missives.

Man of the Future

Hugo was also a seer, predicting back in 1867 the advent of the United States of Europe trading across open borders with a single currency, with “sacred” Paris, not Brussels, as Europe’s capital and “the centre of the big European family” and “beacon of humanity”. From his exile in Brussels, following the advent of Napoleon III’s Second Empire, he expressed his hostility to Haussmann’s urban renewal project – Les Années Funèstes (the Fateful Years), a dirge for lost medieval Paris. He also coined the expression, “it’s daft like the rue de Rivoli”, the east-west artery, opened successively by the two Napoleons. Towards the end of his life, Hugo chaired the Society for the Preservation of Old Paris, his pen always at the ready. “Demolish the tower – no; the architect – yes!”, he protested, successfully, against the demolition of the tower of Saint-Martin-des-Champs (in the 3rd arrondissement). The Hunchback of Notre-Dame, published in 1831 and set against 15th Century Paris, was written to alert public opinion to the dilapidated state of the cathedral (Hugo chaired the committee in charge of its restoration project), but also – 20 years ahead of Haussmann’s project – to the threats hanging over the harmonious unity of medieval Paris.

Paris returned his devotion. On February 26 1882, Hugo’s 80th birthday, 600,000 Parisians packed into the Avenue d’Eylau (in the 16th arrondissement), cheered in turn by Hugo from his two-storey home at no. 130, today a block of flats. A national holiday was decreed, all school punishments lifted. More was to come: Hugo’s funeral, on May 31 1885, was the biggest ever organised in France, surpassing those of monarchs, attended by two million people. Imagine the huge catafalque lying in state beneath the Arc de Triomphe craped in black; the horse-drawn “pauper’s hearse” (following his instructions), hobbling down the Champs-Élysées to Place de la Concorde, across its bridge, past the National Assembly, down the recently completed Boulevard Saint-Germain, up Haussmann’s Boulevard Saint-Michel, finally up Rue Soufflot to the Panthéon, also craped in black and fronted by thousands of wreaths. Imagine the men on the roadside, kneeling down, their hats removed, the silence hanging over the city, broken only by Chopin’s Funeral March and the stomping of hooves. It must be said that Hugo’s demise was conveniently timely, providing the new Republic with an ideal tenant for the Panthéon’s consecration ceremony as the mausoleum of its heroes.

Hugo’s first childhood home (1808–1813) was a stone’s throw from the Panthéon, an apartment conversion of the 17th Century Feuillantines Convent. Its vast, lush garden inspired some of his poetry and the idyllic garden of the Petit Picpus Convent in Les Misérables, where Valjean and Cosette escaped from Javert. Hugo fell in love there with his future wife, Adèle Foucher, as Marius did with Cosette in the novel, in the nearby Luxembourg Gardens. Hugo and Adèle would marry in the church of Saint-Sulpice, by the Luxembourg Gardens, Marius and Cosette at Saint-Paul-Saint-Louis, in the Marais district, by Hugo’s most famous home, now his museum on Place des Vosges. In real life, Hugo’s daughter Léopoldine was married at Saint-Paul-Saint-Louis to Charles Vacquerie, a joyless event for Hugo – “The sad happiness of marrying off one’s daughter” – as it was for Valjean in the novel.

Hugo lived at Place des Vosges (then Place Royale), from 1832 to 1848, roughly through the reign of Louis-Philippe. The magnificent square was the city’s most prestigious address and the project of Henri IV who was assassinated in 1610 and did not see it completed. Hugo’s apartment occupied part of the Rohan-Guéménée townhouse, an affordable deal in Hugo’s days which would fetch head-spinning prices today. The square was renamed during the Revolution after the Vosges département, in gratitude for being the first to pay its taxes to the Republic. Hugo moved here to be close to the Bastille and the Grève (now Place de l’Hôtel-de-Ville), respectively east and west of his home. Besides the storming of its fortress, the Bastille Column commemorated the July 28–30, 1830 rising that brought Louis-Philippe to the throne – Les Trois Glorieuses. Hugo did not like the Column, calling it “a gigantic stove, adorned with its pipe that replaced feudalism”, but liked the Bastille’s huge plaster elephant, where street urchin Gavroche found shelter In Les Misérables. The elephant never became the bronze fountain intended by Napoleon, and was removed in 1846.

The Grève (‘strand’), the Town Hall’s home since the Middle Ages, was the stage of public celebrations and punishments. The assassin of Henri IV, Ravaillac, was quartered here, Victor Hugo’s Esmeralda hanged on the scaffold. It was from the balcony of the old Town Hall that Lafayette proclaimed Louis-Philippe king in 1830, and it was from the Bastille Column that Victor Hugo announced the latter’s abdication in 1848. A few months later Louis-Philippe’s throne would be set aflame at the foot of the same Column. During the uprising of the Commune in 1871 it was the old Town Hall that went up in flames.

Victor Hugo’s house was donated to the City of Paris 1902 by his friend and executor, the writer Paul Meurice. Rather than recreate the apartment as it was, visitors follow the different periods of his life, the content gathered from different places – Juliette’s dining-room from Guernsey, for example, Hugo’s death bed from the Avenue d’Eylau. Gone is the back staircase of his study, through which he stole off to the Impasse Guénémée for his rendezvous with the boulangère on the Rue du Petit-Musc. The alleyway can be reached through Rue Saint-Antoine, and likewise Rue du Petit-Musc, where, amazingly, the corner bakery still stands. Their little hotel, across the street, was demolished in the 1950s.

Hugo’s Paris extends to hidden sites known to few. Avenue Frochot, a lovely alleyway behind an imposing gate, was a stronghold of artists, writers and musicians. Hugo was acclaimed here by huge crowds on his return from exile on September 5 1870, the day following the proclamation of the Republic. He stayed here through the Prussian siege, feasting on one occasion on the leg of an antelope stolen by a friend from the zoo of the Jardin des Plantes. A generation later, Toulouse-Lautrec lived in this house.

Theatre lovers should head for the Comédie-Française, opposite the Louvre, where the premiere of Hugo’s Hernani led to the famously riotous “battle” between the Classicists and the Romantics. Food lovers should proceed to the neighbouring Michelin-starred Grand Véfour, where he dined that night with his close friend and critic Sainte-Beuve, his wife Adèle’s lover soon to be. Lesser known, the delicious Basque Restaurant Auberge Etchegorry, by the Gobelins (in the 13th arrondissement), is another of the city’s best kept secrets, the one-time tavern Chez la Mère Grégoire, looking much the same as when Hugo, Châteaubriand and friends gathered here over a bottle of wine.

Wind down at the Arènes de Lutèce, in the 5th arrondissement, through Rue des Arènes for the prettier approach, Rue Monge for a surreal fairytale approach. This Roman amphitheatre, complete with its lions’ den, was discovered in the 19th Century and already partially demolished when Hugo raised the alarm: “Mr President,” he wrote, “It is not possible that Paris, the city of the future, should renounce the living proof that it was the city of the past. The arena is the ancient mark of a great city. It is a unique monument. The municipal authorities that would destroy it would destroy themselves.” Thanks to Hugo the remainder of the amphitheatre was rescued, the rest reconstructed and planted with a pretty garden.