Home Travel Nantes: A Green Line Runs Through it 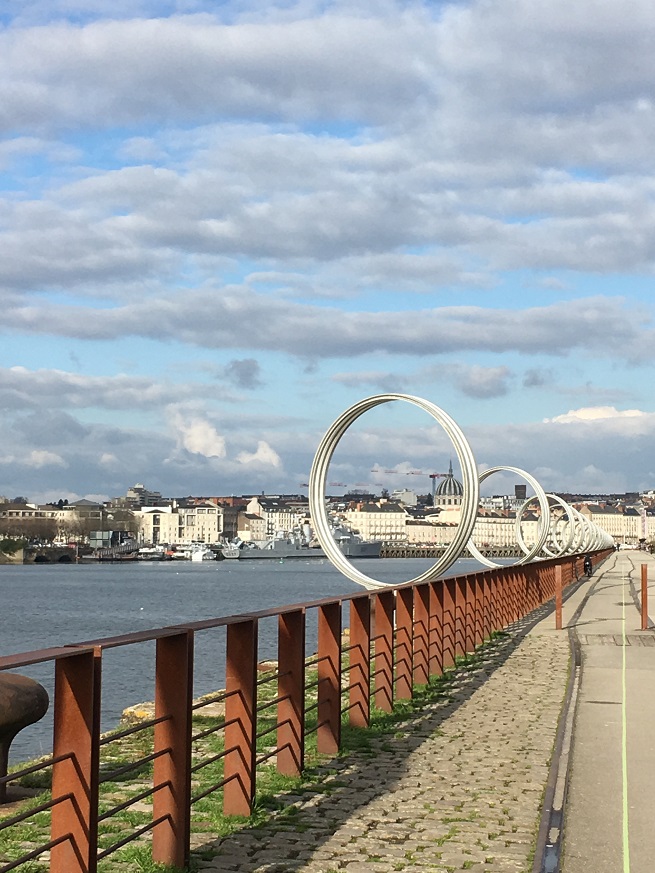 Oz has the yellow brick road, Nantes the Green Line. Following it, Ulrike Lemmin-Woolfrey discovered the best this city has to offer.

After two hours on the train from Paris, crossing the meandering countryside and hugging the Loire river, I arrived in Nantes, France’s sixth largest city, once home to the Dukes of Brittany, birthplace of and inspiration to Jules Verne, and reportedly an art hub unlike any other.

Twitching to go exploring, my first stop was the most obvious historical site in Nantes, the picture-perfect castle of the Dukes of Brittany, and Anne of Brittany, the only woman who was Queen of France twice. The outside decorated with turrets and a moat, the inside of the castle reveals much of Nantes’ history, from the dukes to the slave trade.

Afterward I was sauntering through the windy streets of the medieval town centre, and kept coming upon a green line. This turned out to be the ingenious idea of Le Voyage à Nantes, a tourism initiative and organiser of the fantastic annual summer arts and performance festival. The Green Line is a self-guided walking tour taking in the most important sights of Nantes, ranging from the ancient castle to unusual art installations outside shops, which, as part of the annual arts festival had their shop’s business reimagined by artists and displayed outside. So, you’ll find for example a variety of wigged animals outside a hairdressing shop, or a giant lucky cat outside an Asian shop. The line takes you past churches, boiled sweet shops (try them, they are hard outside and soft in the middle, and come in the cutest metal tins), and re-invented sites such as the LU (Lieu Unique), a beautiful former biscuit factory and now a popular art, performance, café and restaurant space.

Talking about re-invention, Nantes is rather good at that. Having suffered numerous set-backs in its time, from filling in its many canals between the world wars, to being bombed heavily in WWII, to being separated from Brittany and never returning to the geographical region, there was one more recent hick-up that made Nantes the fantastic city it is now. Once one of the world’s leading ship-building ports, when the shipbuilding industry declined, or rather died, in the 1980s, Nantes’ then mayor together with an appointed artistic director, decided to put all their efforts and funding into art. This resulted in utterly unique projects such as the LU site, the Voyage à Nantes festival, and the Machines de l’Ile, a merger of art and mechanics, heavily inspired by Jules Vernes’ fantastic creatures, among other initiatives.

The best known of the Machines d l’Ile creatures is the gigantic mechanical elephant that takes visitors for a ride, walking along, trumpeting and spraying water, and looking at you with eerily real eyes. Then there is a triplex carousel, the levels representing under the sea, on land, and in the air, where you can not only go around in circles, but also interact with your creature. If you must know, I chose to ride a dragon, whose eyes rolled and whom I could make puff smoke. You can visit the artists’ lab, where creatures not just for Nantes, but for events all around the globe are being built, and see the latest project, a huge tree full of walking caterpillars and giant ants and birds, which is being created as a permanent attraction for Nantes.

Following the Green Line, I came to yet more art installations on the island off the old centre of Nantes, galleries, cafes, and lots and lots of people enjoying the sights, proving that putting money and effort into art really works.

The next day, I decided to first pop into the Jules Vernes Museum, he was, after all, a childhood idol. The museum allows a great insight into what drove him and shows quite how prolific a writer he had been. Then I hopped onto a ferry to take me across the river to little Trentemoult, on the opposite side of the Loire and once a fishermen and captains village. A dream for photographers, full of quaint little coloured houses, pretty gardens and individual shops, there is also a rather lovely restaurant: La Civelle, serving the freshest seafood, local wine, and with a terrace on the river, overlooking Nantes.

Then I headed back into town for a spot of shopping. The Passage Pommeraye was calling. Similar to the Parisian covered shopping passages, this one was built in the 1840s, but, unlike those in Paris, this passage covers three floors, with magnificent staircases connecting the levels, great individual boutiques and again, those photo opportunities. Exiting at the other end, by the stunning Place Graskin with its theatre, I connected again with my friend the Green Line, which led me straight to the Art Nouveau Café La Cigale. It is a bit of an institution, having been declared a historic monument, not least for its amazing tiles throughout. I arrived just in time for Afternoon Tea, the place was full of local ladies participating, and with a Gourmet Champagne on the menu instead of a Gourmet Cafe, who could resist?

The next morning, before hopping back onto the train back to Paris, I had an appointment at the Musée d’Arts, which is a diamond in Nantes’ crown. Not only is the old building, housing art dating between the 13th and the 21 centuries, worth a visit in its own right; but also, the new extension, The Cube, added to house solely contemporary art, is just stunning in its simplicity. After being closed for six years for intensive restoration and the building of said extension, the museum is due to open again in June 2017, ready to show off some 10,000 works of art represented across 17,000 square meters of purpose-built exhibition space.

What can I say? Nantes, is worth more than one visit, but at the very least one perfect weekend’s stay. Something for the entire family, often stated, but very true here, and all on a walkable scale. Just follow the Green Line.

Travel from London to Paris with Eurostar, and then onward to Nantes: www.voyages-sncf.com.

If you have extra time, made a detour across the river to Maison Radieuse Le Corbusier, Boulevard Le Corbusier, Rezé. One of three housing projects by the famous architect, the tower block functions as an entire village community. To view the still intact show apartment, a perfect time capsule, arrange an appointment through Nantes Tourism.

The festival of Le Voyage à Nantes starts on 1 July 2017, and runs until 27 August 2017. For the programme see www.levoyageanantes.fr/l-agenda-du-voyage/