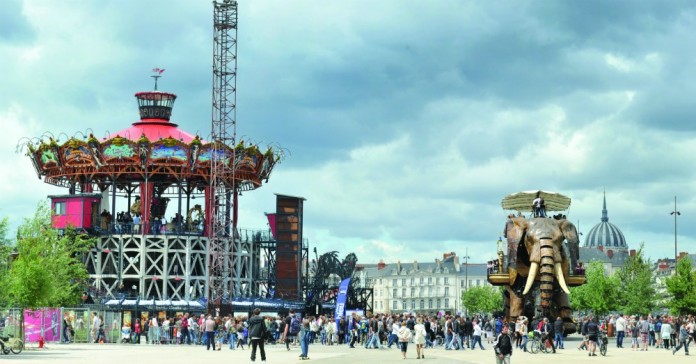 Nantes has adopted a risky strategy by deciding to make contemporary art its focus. Another French city with a similarly intriguing past might be expected to rest on its historical laurels – such as its neo-Gothic cathedral, medieval château and 19th-century terraced houses – but not this island city. Innovation permeates its very bricks and mortar, so Nantes’ citizens can’t help but strive for creative originality.

This isn’t to say that Nantes has estranged itself from its erratic and sometimes murky past – featuring shipbuilding, slave trading and the popular ‘LU’ biscuit. Quite the opposite, in fact: a whistle-stop tour of the city centre provides enough proof that les Nantais hold their heritage dear, and invest huge sums into architectural renovation. The white 18th century houses of the ship owners’ district on the central Île Feydeau require regular repair, their soft limestone bricks easily crumbling under the weight of their age.

A stone’s throw away, the paved Place Graslin has been pedestrianised, creating a protective cocoon of space around its imposing and impeccably preserved  neo-classical theatre. And a 15-minute walk eastwards, through the cobbled Quartier Bouffay leads to the Château des Ducs de Bretagne – the medieval residence of the Breton monarchy. Its 2007 renovation has left it spick and span, and housing a state-of-the-art museum of local history.

A nip across the river to the Île de Nantes sees you greeted by the city’s creative beating heart, where boldly modernised former warehouses and factories house the island’s ‘creation quarter’. Within these buildings, schools of art, architecture and design intermingle with recording studios, rehearsal spaces and concert venues. Art installations unexpectedly pop up around each corner and contemporary art exhibitions are held in the Hangar à Banane, a former fruit warehouse.

Along the banks of the Loire, shipbuilding workshops have been transformed into restaurants, bars and entertainment venues, which are packed with artily dressed students and chic thirty-somethings sipping an apéritif after their day’s work at a nearby cultural enterprise. The whole place is incredibly cool, but still stops short of taking itself too seriously. In Nantes, art isn’t a signifier of exclusivity, rather it’s commissioned to bring together its citizens and attract visitors from all over the globe.

Nowhere is this more evident than at the HQ of the Machines de l’île project, where the eccentric imaginations of artists François Delarozière and Pierre Orefice manifest in the form of a mechanised universe inspired by the writings of Nantes-born Jules Verne, the city’s industrial history and the inventions of Leonardo da Vinci. A giant merry-go-round punctuates the quayside skyline, boasting three levels of weird and wonderful sea creatures and vessels. Nantes used to be one of France’s key ports and this expresses the importance of the mer de l’Atlantique.

Beneath a nearby corrugated iron roof sits the Machines de l’île’s star: the Great Elephant of Nantes. Some 12 metres high and with space for 50 people to clamber onto its back, each hour or so mechanical cogs begin to turn and this bête fantastique slowly creaks into life. Majestically stepping onto the quayside, he sprays the crowd with water from his trunk, trumpets triumphantly and bats his long, sultry eyelashes at the crowd. The grand beast’s movements are so uncannily life-like that it’s easy to forget you’re witnessing a street theatre performance.

Nantes is a young city, with two thirds of its 290,000-strong population under the age of 40, and youthful trends are filtering into its culinary ethos as well as its widespread artistry. Sometimes the two combine, as in its annual Le Voyage à Nantes trail, which sees the installation of public artworks all over the city and its environs. Local restaurateurs get involved by setting up La Cantine du Voyage, a pop-up restaurant and cookery school on the Île de Nantes that showcases top local produce and chefs.

Today’s booming demand for a ‘back-to-basics’ approach to agriculture, favouring organic, locally and ethically sourced ingredients, seems to have reached unprecedented heights in Nantes. The Pays de la Loire region is known as ‘France’s kitchen garden’ due to its fantastic abundance of vegetables, and this combined with the fresh seafood which is hauled daily to Nantes’ several markets makes the city a culinary playground for energetic young chefs. Among the city’s finest eateries are Song, where Pan-Asian aromas and techniques meet local produce, and Les Chants d’Avril, which serves up inventive ‘bistronomique’ twists on French classics.

The city’s artistry even extends outside of its limits with its Estuaire art trail of permanent sculptures and installations, which was set up throughout 2007, 2009 and 2012. A total of 28 artworks are dotted along a 60km stretch of the river Loire, from Nantes to its estuary at Saint-Nazaire, and are best appreciated by boat – a three-hour round trip. In true Nantais style, these artworks were commissioned to showcase the verdant countryside through art – to play with the landscape and its relationship with the city.

Creativity, then, isn’t only woven into this city’s urban fabric, but also the very land that surrounds it. Nantes is a metropolis that’s proud of its roots and its region, always looking ahead but never turning its back on the past. Perhaps the only way to fully express this is through art, which is happily succeeding in defining this city’s identity. It seems the risk has paid off.

Hotel Pommeraye: Situated just five minutes from Place Graslin and with some rooms designed by contemporary artists. Doubles from €129.

Back to Black: The Charcoal Trend in French Cooking