Home Learn History Of Girls and Gaulois: The Equality of Celtic Women in France

Long before Julius Caesar began his conquests, women held equal positions with men in the Celtic (or Gaulish) culture that spread over much of Europe. They excelled as leaders, warriors, scholars, artists, and inventors, but especially important, they were equal partners in family life. Women’s value changed when Rome and Christianity conquered Celtic family-centric populations and enforced their cultures of woman as second-class citizens (and worse).

This equal position of Celtic women is currently being unearthed in archeological sites, which inspires a new way to look at art, buildings, dress and even tapestries, according to researcher and author Jacqueline Widmar Stewart. Hints of Celtic women’s position and influence can be found through this Celtic lens.

This was the discussion and discovery in the first of a series of Salons of the Alliance Française Silicon Valley (AFSCV.) It featured Stewart who has written a series of books on “Hidden Women” that dives into Celtic archeological findings, especially of the Iron Age (850 – 0 B.C.E.), and presents proof points of the honoured legacy of women in the Celtic culture from Scotland to Slovenia. Stewart also is on the Board of Directors for AFSCV.

The salon focused on Celtic culture in France and was a lively discussion. According to Stewart, Celtic women were equal because their culture was based on family and nature. Women were stewards of family, but also participated in all areas of leadership and culture. That changed under conquering Roman and Christian law where Celtics became slaves and women were treated “like chattel,” said Stewart.

“Women were not legally equal to men under Roman law,” said Stewart. “Females were blamed for original sin, derided as inferior to males and accused for the loss of paradise. In fact, the vast majority of those burned at the stake in the Middle Ages were women … who were accused of witchcraft.”

By understanding the Celtic viewpoint of women, it’s interesting to look again at what is readily available in France and see it through a Celtic lens. The “relook” can be a new way to regard women in history using Celtic clues found in buildings and art.

For example, France’s Celtic warrior Joan d’Arc was burned at the stake, but the Church was frustrated that it could not accuse her of heresy or any position against the church. Instead, she was deemed toast because she dressed as a man in prison. But pants were protection against rape as they were harder to remove, not only in prison but also on the battlefield. Look for it – Joan is dressed in pant-like armor on her horse in the statue in the Place des Pyramides. Portrayals of her in churches have her wearing a skirt.

Celtic women often fought alongside the men. In fact, according to Stewart, Caesar thought the Celtic men were fierce, but that the women warriors were fiercer. Many excavated burial sites include women in warrior dress along with gold objects of art that indicate regard for women. These can be seen in a variety of museums, including the Musée de Cluny Le Monde Médiéval in Paris and Saint Germain-en-Laye’s Musée d’Archéologie National. Saint Germain-en-Laye is an easy train ride from Paris. The museum is housed in the French king’s castle with a park designed by André le Notre of Versailles fame.

Even Asterix, the French comic book character, was discussed at the salon. His stories represent traditional Celtic culture that fought the Romans with the help of a magic potion but included strong women too. Asterix is even part of the story told at Muséo Parc Alésia, where after a two-month siege Caesar defeated Vercingetorix, the leader of the Gauls, whose last plea before capture was to save the lives of the women and children. Located just west of Dijon, it provides information on current scientific archaeological techniques and findings.

According to Stewart, a relook at the tapestries seen throughout France is an important way to view Celtic women. The women are strong and often doing key work – weaving, teaching math, surrounded by herbs used in medicine, shown ready for battle. In particular, the Lady and the Unicorn tapestries can be relooked at with a Celtic lens. Typically, the panels are described as representations of the five senses plus an extra one “à mon seul désir” (to my only passion). 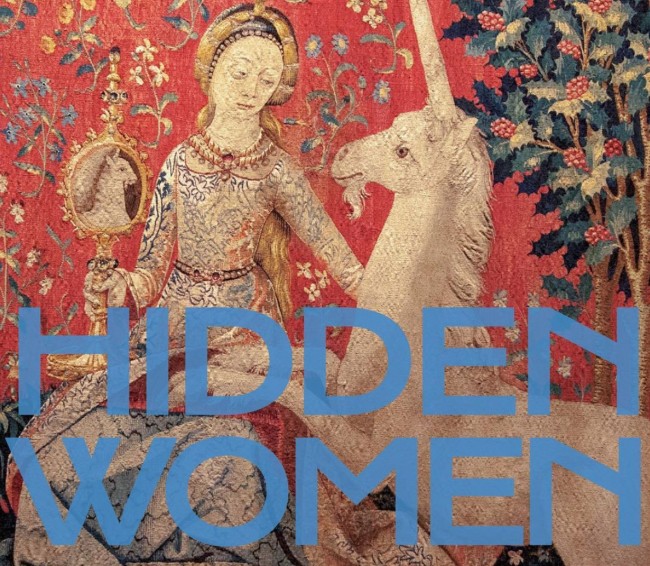 “Consistently all the figures are beautifully dressed and engaged in a variety of activities,” Stewart wrote. “These scenes might also be construed as women in instructional roles with apprentices, an effective and customary teaching method, which argues against a master-servant relationship.”

In addition, the face of the woman holding a mirror that reflects the unicorn is the only one that shows unmistakable distress. Th medieval tradition was that a mirror reveals history. Could this distraught woman be looking back into history telling viewers the past horrors suffered by the Celts? Perhaps these six women were held in high regard in the Celtic culture for their knowledge, which means they could be druids? Women were often druids and revered for their knowledge, but because of that they were particular targets for the Romans and the Christian Church and were often slaughtered and burned. That would be scary to look at.

There is also Musée du Pays Châtillonnais in Châtillon-sur-Seine (north of Dijon) that is filled with treasures of the Celtic age, including those from a woman’s tomb called the Dame de Vix. Discovered in 1953, the tomb is considered to be the most prestigious of the late Iron Age (around 500 BC). The woman was buried in a highly engineered chariot and wore precious jewelry, including a gold torque, or necklace, that is a masterpiece of Celtic goldsmithery. The Treasures of Vix include a wide variety of objects found in the area, including Celtic, Greek and Roman artwork.

Beyond the Celtic women lens, there is a general Celtic lens that can be seen throughout France. In Celtic villages, the biggest buildings were great halls where people gathered and enjoyed festivals. Today, in many halls and buildings in France, the décor and design of the ceilings and walls are vestiges of a Celtic building or inspired by Celtic design. The Beaune Hospital has a strong Celtic design influence as does Lille’s Rihour Palace, the Abbey Saint Germain des Près which was part of a former Pre-Christian abbey, Carcassonne’s castle that was a target of the Crusade against the Cathars (a sect that let women take part in religious rituals) and many more.

“To me, the trappings of the Celtic fest halls (or salle de fête as the French would call them) represented the open and welcoming attitude of the Celts,” said Stewart. “There were medallions on ceilings, open rafters, motifs of nature, Celtic crosses, and everything was rhythmic and in balance. Try sitting in these places and imagine the crowds of equal men and women focused on family and working together to build their lives.”

Stewart’s favorite place to soak up the Celtic culture is the Pavilion de la Fontaine in the Jardin du Luxenbourg.

“Sitting there wraps you in Celtic tradition,” she said. “The Nibelungenlied, the heroic epic about a Burgundian battle with the Romans in the Rhineland, refers to a delegation of women on their way to the pavilions. Pavilions in the park, I suspect, are an old Celtic tradition. This one epitomizes the beauty and function of park pavilions from the deep past. Even the name harkens back with its descriptive quality. We’ve sat in the forest with the band playing in the bandstand, looking across the flowers on pedestals, sipping a glass of wine. Like the Lady and the Unicorn tapestries, it appeals to all the senses.”

There are many more places in France to imagine and enjoy the Celtic culture and woman’s influence that Stewart references in her books. The AFSCV salon ended sharing champagne and nibbles like in a Celtic fest hall while participants wondered if history would have been different if Celtic women used #MeTooCeltic to post their stories. If so, we would have learned more about Celtic history and heard voices that were destroyed by oppressors.