From Marie Antoinette’s execution to Coco Chanel’s eviction, they have been the offices of writers and the dens of thieves. Chloe Govan shares the stories behind some of France’s most legendary hotels

The guillotine has fallen, slicing off the queen’s head. The crowd chants, “Vive la République!”. Startled, you sit bolt upright in bed, then sink gently back down into your comfortable Hôtel de Crillon branded pillows, safe in the knowledge that it was all a dream. Or was it? In 1793, the occupants of this building witnessed this very scene: from these windows, members of the government of the French Revolution had a direct view of the executions of both Louis XVI and Marie Antoinette.

This palatial hotel was originally commissioned as a royal residence in 1758. Twenty years later, Benjamin Franklin signed a treaty with France here that recognised the United States of America’s Declaration of Independence. Then François Félix de Crillon took it as his home, to which Marie Antoinette was a frequent visitor, little knowing that one day she would be publicly slain outside the house in which she had enjoyed sumptuous banquets and even piano lessons.

Since 1795, the place de la Révolution has been called place de la Concorde, and today the Hôtel de Crillon is one of the few hotels in France to have Palace status. Yet it is far from being the only one associated with iconic figures from history.

After the Queen of France came the Queen of Fashion, Coco Chanel, and the equally iconic Ritz Paris, which she called home for 30 years. It mattered not a jot to Coco that she already had a glamorous apartment nearby, above her rue Cambon store; it was at the Ritz that she usually chose to entertain. For a while, she used the hotel for nothing more serious than feasting with friends while draped in pearls and furs, but when the Second World War started, her life took a turn for the worse.

When the Germans marched into Paris in 1940, they took the hotel, expelled its occupants and transformed it into a headquarters. Coco Chanel was turfed out of her favoured suite (which is today available to guests at the price of $15,000 per night) and it was taken over by a high-ranking military commander who openly despised the French. She was later allowed back, courtesy of her controversial relationship with a German spy, but this – along with allegations that she had become a spy herself – indelibly blotted her reputation. In the French public’s eyes, she was now, quite literally, sleeping with the enemy.

Amid fury that a national icon had betrayed her country, and as her wealthiest customers fled the country to escape the destruction of the war, Chanel was compelled to close her fashion house altogether.

Even after Ernest Hemingway had liberated the Ritz bar, and served champagne to soldiers there in celebration of the Nazis’ retreat (which had actually happened before he got there), Chanel struggled to regain her fan-base. She did, however, gasp her final breath in her bed at the Ritz in 1971.

A few years after that, Charles Ritz, the hotel founder’s son, also passed away. The glitz had faded and, without the presence of original family members at its helm, profits began to plummet. Once the setting of Audrey Hepburn movies like Love in the Afternoon, the Ritz was now suffering a slump. Businessman Mohamed al-Fayed purchased it in 1979 and injected a great deal of cash into reinventing its prestige, but after the symbolic dethroning of fashion royalty, tragedy struck for a real royal too. Princess Diana had been dining in the Imperial suite with her boyfriend Dodi al-Fayed, Mohamed’s son, before they met their death a mile and a half away. Fleeing with the paparazzi in hot pursuit, their driver lost control of the vehicle at the entrance to the Pont de l’Alma tunnel.

The hotel endured a turbulent time thereafter, but after a four-year, multi-million-euro renovation it reopened in 2016, to enormous acclaim.

There are other residences in the area with historical associations to Coco Chanel, such as Hôtel Castille, which is located right next door to her shop. The owners’ much-loved Russian Blue cat, Heliot, is billed as a rival to Choupette, the pampered Birman of the late Karl Lagerfeld (ironically also a Chanel designer).

Now let’s go to an altogether different type of Ritz: Biarritz. Back in 1908, before Chanel had so much as opened her first shop, let alone established this corner of coastline as her glamorous summertime playground, the Hôtel du Palais was already making political history. This was the first location outside the UK ever to see a British prime minister appointed within its walls. King Edward VII had a discreet meeting here with H.H. Asquith for this very reason. It was a meeting so shrouded in secrecy that not a single journalist knew of their whereabouts.

Initially built to be a summer villa for Napoleon III and the Empress Eugénie, it was sold in 1880 and converted into a hotel. Despite mockery from the media, then a closure during the First World War for the building to be used as a hospital, the local mayor refused to give up on the building, and later launched a campaign under the hilariously blunt and straightforward slogan: “No Palace, No Millionaires”. When it finally reopened, Coco Chanel and other prestigious guests, such as Frank Sinatra and Jayne Mansfield, passed through its doors and its glorious reputation was restored.

Back in Paris, heroes of the literary world made history too. The Hôtel du Petit Moulin was once a bakery, which Victor Hugo would visit each morning for his daily baguette, and the original 1800s façade spelling out its status as a boulangerie is still intact.

Sister hotel the Pavillon de la Reine, a 10-minute walk away, was once home to Hugo too, hence the suite named in his honour.

Elsewhere, the Hôtel Monte Cristo acts as an historical recreation of the world of the well-travelled Alexandre Dumas. Pick up a paperback copy of The Count of Monte Cristo and relive the 1800s, albeit in the comfort of a sumptuously modern bar decorated with Oriental wallpaper complete with mosaic-style peacock prints, before heading to the best peacock- embossed interior of all: the Jacques Garcia- decorated Oscar Wilde suite at L’Hôtel on rue des Beaux-Arts. If you’d like to, you can even sleep in the very room where Wilde died.

Then there is the Hôtel Lutetia, where James Joyce penned Ulysses and Albert Cohen created Belle du Seigneur. And then there is Le Scribe, the location that hosted the world’s first ever motion picture, courtesy of the Lumière brothers.

Yet Paris is home not just to the famous, but also to the infamous. In 1911, the Hôtel Da Vinci was involved in one of the world’s biggest ever art heists. Leonardo’s much-treasured Mona Lisa was seized by career criminal Vincenzo Peruggia, an Italian ostensibly looking to reclaim his countryman’s artwork on behalf of the homeland. According to Peruggia, the painting had been “stolen by Napoleon” and he felt obliged to return it to Italy. He used his employment at the Louvre to gain the necessary inside information before audaciously swiping the work and, apparently, briefly hiding it in the hotel. He was finally caught after he offered it to an art dealer in Florence.

Regarded as a hero in Italy, this self-fashioned gangster of the art world received a lenient sentence, but the hotel, with its Mona Lisa-themed rooms, will be forever legendary. For those wishing to see the painting, it is a mere 650 yards away in the Louvre!

Another location of Italian-influenced infamy is the Hôtel Prince de Galles, the Art Deco residence where the French singer and actress Dalida once attempted suicide in imitation of her tragic lover Luigi Tenco.

Of course, not all historic French hotels are Palaces, or located in Paris. There are some quirky gems which might lack associations with celebrities, socialites and politicians, but are equally worthy of mention. For example, on the less glamorous, ‘wild west’ side of the Loire Valley, away from the opulent châteaux and clichés of wealth, are cave hotels like Les Hautes Roches, where monks once hid to escape persecution in the Wars of Religion.

Nearby, an epic 17th-century residence known as Demeure de la Vignole also offers the opportunity to stay in a cave house carved into the rock, with mod-cons such as phone and internet connections cunningly constructed within the rock face, some of which itself dates back a hundred million years. In terms of prehistorical experiences, it rarely gets better. Beyond this, local troglodyte zoos, where animals inhabit open-plan quarries, plus underground wineries, mushroom caves, silkworm farms and even an apple-drying museum all help to explain the region’s past. An experience like this reveals the roots of the Loire Valley’s communities. 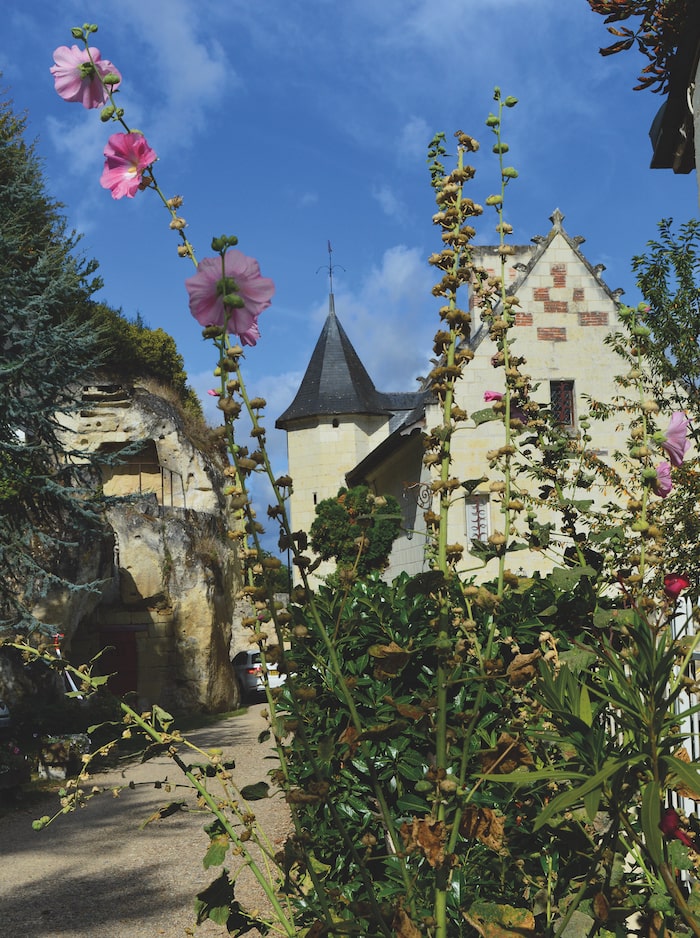 Finally, a mere few miles from here lies perhaps the most atmospheric experience of all: the opportunity to stay overnight in the grounds of the legendary Abbaye Royale de Fontevraud. This was the first abbey in France to be run entirely by women and is therefore held by some to be the place where feminism first began in the country. The nuns’ quarters were larger and more attractive than those of the monks, which was unheard of in that era. The community isolated themselves from the non-believing outside world by becoming self-sufficient, with their own water supply and windmills, plus self-run bakeries and vegetable gardens. The abbey still houses the graves of Eleanor of Aquitaine and Richard the Lionheart. Her tomb is placed higher than his as a signature of female dominance, and her figurine holds a book as a symbol of her literacy.

The abbey also has a controversial history as a prison, where prisoners of war were forced to work long hours in total silence, forbidden from communication as a psychological torture technique. Jean Genet was once imprisoned here, and this was where he wrote his novel Miracle of the Rose. A stay here enables you to prowl the abbey after hours, once the day visitors have disappeared, and feel the impact of hundreds of years of history.

The hotels here present a starting point for an extraordinary historical journey that no guest is ever likely to forget.