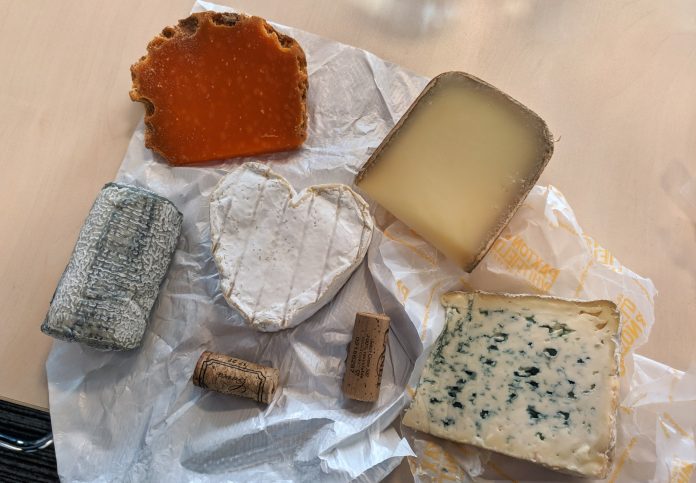 It’s pique-nique season and Team France Today has been hankering for the smelly stuff. We headed to Paxton & Whitfield for a round-up of essential cheeses and ended up with a truly formidable tasting board, perfect for summer scoffing:

Soft: Coeur de Neufchâtel (£6.50/200g)
Normandy’s oldest cheese is often likened to Camembert in taste and texture, except it packs a tad more punch. Rich, salty and divinely creamy, it spreads beautifully on a chunk of crusty bread and pairs well with Cahors red wine. As for that striking shape? Legend has it that the women of Neufchâtel-en-Bray presented their English lovers with this cheese during the Hundred Years War, to win over their hearts. Well, it certainly worked on us…

Blue: Bleu d’Auvergne (£25.00/kg)
Roquefort’s little sister (made with cows’ milk instead of sheep’s), this buttery blue is a cheeseboard favourite. It’s salty on the tongue, crumbles nicely on a biscuit or salad, and can even be melted for a gooey dish-topper or filling. The experts at Paxton & Whitfield recommend washing it down with a glass of Châteauneuf-du-Pape, although sweet dessert wines make equally good bedfellows for this cheese.

Hard: Mimolette Reserve (£50.00/kg)
We were itching to tuck into Lille’s emblematic orange cheese, a firm favourite in the office. Speaking of itching… did you know that Mimolette is flavoured with the aid of rind-nibbling cheese mites? These minute critters give the crust its pitted appearance, help with aeration and overall create a nutty, caramel-y taste – but don’t worry, they’re long-gone before the cheese hits the shelves! Port and berry-based wines are perfect accompaniments for this sweet little number.

Soft: La Buchette (£6.25/150g)
The log-shaped La Buchette is a creamy delight. Beneath the exterior – which, incidentally, can be either ‘buchette cendrée’ (ash-coated) or ‘buchette blanche’ (white rind) – this cheese’s goopy, tangy flesh awaits, lending itself generously to a cheeseboard or even served as dessert with fresh fruit. Miam!

Hard: Ibargui (£37.00/kg)
What this cheese lacks in stardom, it makes up for in stench. Hailing from the lush Ossau Valley in the Pyrénées, Ibargui is a lesser-known stinker that deserves more attention – it certainly grabbed ours (in fact, it was passed between people for a round of nose-wrinkling)! Get past the initial, eye-watering whiff and you’ll be rewarded with a pleasantly mild and slightly floral mouthful of cheddar-like goodness. Try it with a dark, full-bodied red wine for maximum flavour.

France Today enjoyed this cheeseboard courtesy of Paxton & Whitfield, complemented by a variety of wines from Château Canet.