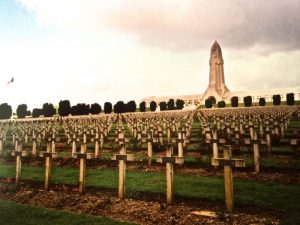 France is to hold international commemorations marking the centenary of the Battle of Verdun on May 29th 2016.  President Hollande will lead the remembrance of one of the longest and bloodiest campaigns of the First World War.

The German Army launched its offensive against the symbolically important target of Verdun on February 21st 1916. The fighting lasted almost until Christmas and cost around 300,000 French and German lives.

The Centenary commemorations will continue throughout 2016, a reminder of the human cost of the prolonged struggle for Verdun 100 years ago. The Verdun Memorial Museum (Mémorial de Verdun) will be open to the public after reopening its doors to the public on February 22nd after a major redevelopment for the Centenary.

The expanded exhibition space has been completely rethought, with the aim of offering visitors an ‘immersive experience’ while remaining faithful to the spirit of the Verdun veterans who founded the Memorial in the 1960s.