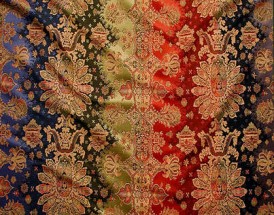 The first major tribute ever paid to this major figure in interior decoration, it takes us chronologically through eighty years of creation, highlighting the skills and knowledge defining the Pierre Frey spirit and vision.
This exhibition features the finest creations produced by Maison Pierre Frey since 1935. In the Study Gallery’s six rooms, it brings together some two hundred works from the creator’s collection illustrating the eclecticism and artistic collaborations that have characterised its history.