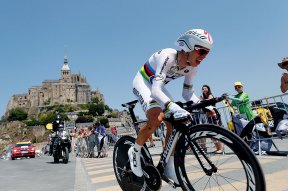 The 103rd edition of the historic Tour de France cycle race will see its Grand Depart for 2016 take place on Saint-Mont-Michel’s smooth terrain. The first of 21 stages, Mont-Saint-Michel’s flat stage stretches for 188 km of the total 3519 km race.

The incredible athletes will visit neighboring countries, passing through France, into Spain, the Principality of Andorra and Switzerland. The 2016 edition of the Tour de France will feature the famously tense time trials, bonuses given at the end of stages and points awarded at the end of each stage and tough hill climbs. Come and see history being made, and watch some of the worlds best cycling champions compete once again.