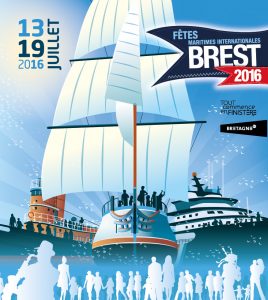 After celebrating its 20th anniversary in 2012, Brest’s International Maritime Festival is now ready for its 7th edition to be held from 13 to 19 July 2016. This edition’s highlights will be the presence of the Hermione, a replica of La Fayette’s historical flagship (from 10 to 17 August 2015 and then during the festival in 2016) and a presentation by the French Navy for the first time ever, of the Monge, an impressive test and measurement vessel.

As always, the festival will also bring together sailing ships, traditional boats, exotic crafts, yachts and other boats from around the world. There will also be concerts, exhibitions and other wondrous events to the delight of the hundreds of thousands of visitors expected. View the program here.