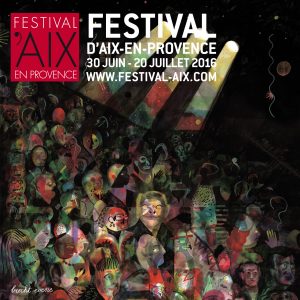 Since 1948 the Festival International d’Art Lyrique has been at the heart of Aix en Provence’s cultural scene. The festival opens up arts and culture to everyone in Provence whether they are young, part of a family, new or longstanding fans of theater. Under the direction of Bernard Foccroulle from 2007, the festival has widened its scope, creating programs that appeal to an even wider audience. Through many creative initiatives such as singing and acting workshops, education programs, The Opera-on youth program the festival encourages everyone to experience and engage in the arts.

This years festival will feature phenomenal Operas including the Philharmonic Orchestra and Oedipus Rex, performed to the chorus of Symphony of Psalms. Concerts by renowned classical music stars such as the Chœur de l’Ensemble Pygmalion performing Bach Motets and the artists of the festival academy performing Mozart repertoire. Free live opera screenings will be shown outdoors on a giant screens in several cities in the Provence-Alpes-Côte d’Azur region in France as well as abroad. Operas and concerts will also be broadcast live on the radio and on TV. There will also be meetings and workshops with conductors, performers and the many people in the background creating the festival. View the program here.

The main stages the 2016’s festival will in 6 beautiful locations across provence, at the Théâtre de l’Archevêché, the Grand Théâtre de Provence, the Théâtre du Jeu de Paume, the Cour de l’hôtel Maynier d’Oppède, the Grand Saint-Jean and the Auditorium of the Conservatoire Darius Milhaud. An impressive team of more than 300 technician’s work hard all year round to create the incredible costumes, set designs and props.