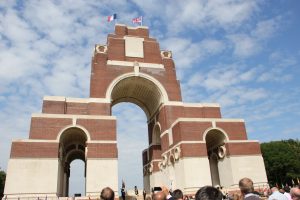 Commemoration of the battle of the Somme

To mark the Centenary of the Battle of the Somme on 1 July 2016, a national commemorative event will be held at the Commonwealth War Graves Commission Thiepval Memorial in Northern France. This will be led by the Department for Culture, Media and Sport, on behalf of the UK Government, and the French Mission du Centenaire de la Premiere Guerre mondiale, on behalf of the French Government, in partnership with the Commonwealth War graves Commission and The Royal British Legion.

10,000 people are expected to attend this moving ceremony. Many dignitaries will also be in attendance, including heads of state and senior members of the royal family. Due to the huge public interest, the 2016 service at Thiepval will be a ticket-only event. The ballot for tickets for residents of the UK and Ireland is now closed. The ceremony will also be shown on large screens in several towns (Amiens, Albert and Arras) so that those who are not able to obtain tickets can also participate.