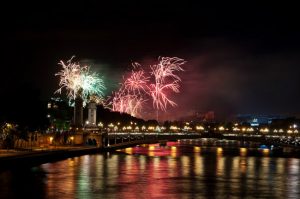 A huge variety of spectacular events will bring people all over France together to celebrate the historic Bastille day on the 14th of July. The French National Holiday commemorates two significant events of the French revolution, the storming of the Bastille on the 14th of July in 1789; and the Fête de la Fédération on the 14th July, 1790, which marked the unity of the French and the achievement of peace and freedom.

Celebrations historically begin the night before, with fire station’s across France hosting monumental parties, view the Paris and region-wide programs here. Outdoor concerts are performed for spectators by some of Frances biggest stars, extravagant firework shows will light up the skyline and streets in every region of France will throw parties. Following tradition, in Paris, Bastille day will begin with an official military parade on the Champs-Elysées attended by The French President and state officials followed by an Air Force show animating the sky, view the program here. The spectacular Firework Show will begin at 11pm themed ‘Paris is a Party’ in the gardens of Trocadero near the Eiffel Tower, spectators can gather at the Champ du Mars and the Place du Trocadeo.

Tip: take advantage of the beautiful July weather and take a picnic to enjoy with family and friends whilst taking in the festivities.