Home Week in Review Sarkozy, Bush and the Marseillaise 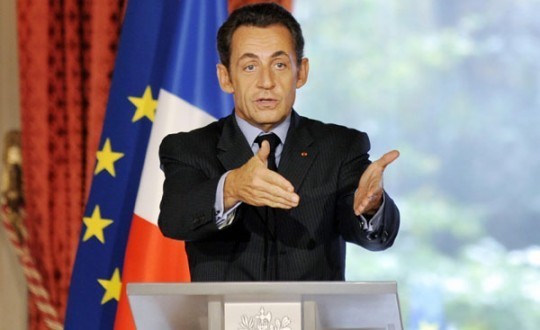 Translated from the French by Anna Wainwright

First appeared on www.france-amerique.com on October 16, 2008

This week, the French press questioned French and European plans for an economic revival, and examined the shaky future of the American economic paradigm, before lingering over the recent affair of the Marseillaise sifflée.

It is impossible to know at this point when the financial crisis will end. This week, as the stock market continued to unravel, the European Council presented a common front for the first time, with a plan to inject close to 1,700 billion euros into banks as a safeguard against collapse. The reunion of the Eurogroupe was also an occasion to demonstrate the unity and strength of the continent, at a moment when that perception is faltering. “Challenged by Russian nationalism in the Caucasus, swept away by the financial tidal wave from America, Europe is coming back to life,” Arnaud Leparmentier, a European expert for Le Monde, declared. “An exceptional crisis, an exceptional response: the invitation extended to British Prime Minister Gordon Brown, the man of the pound sterling and the City, to the summit meeting of European leaders, and the suspension of sacrosanct rules on competition and budgetary restraints. Will Europe become what it has been capable of since Maastricht in 1991: a Europe of common politics and unified economy?” Le Figaro lauded the activism of Nicolas Sarkozy, which has “pushed boundaries” and proven Europe’s power, despite opposition: “Nicolas Sarkozy has built bridges between Europhiles and Euroskeptics. The plan decided Sunday was European, but its implementation will be accomplished within a national framework. Valéry Giscard d’Etaing was very pleased with the plan, and neither Jean-Pierre Chevènement nor Philippe de Villiers will be able to criticize it in good faith. Those on both the Left and the Right are watching the breakthrough of this European economic government with satisfaction–a government Jacques Chirac and Lionel Jospin worked for in vain.”

Writing in Libération the political scientist Bernard Guetta was equally pleased: “Where would we be right now if we didn’t have the Euro? We would have been plunged into total fiscal turmoil. Not only would Europe have been unable to weather the financial crisis brought forth by the United States, Europe would have both paid the price of the crisis and also been at the mercy of it…The ‘Europeanists’ were right to insist, in defiance of skeptics, that a single currency would not take long to create common policies..that political Europe would eventually come into its own.” Europe was faced with a make or break choice this weekend, and it seems to have chosen the right path.

As Europe searches for the right direction, the French press also examined the choice Americans now face: what will the future be like after the Bush years? With less than three weeks to go before Election Day, Le Figaro observed the “great change in direction” taking place now in America: “In matters of economics and diplomacy, the most ideological administration in modern American history is ending with a spectacular renouncement of the dogmas it has preached since its beginnings, “Pierre Rousselin writes in an editorial. “Homage must be paid to American pragmatism, the one true American religion and one which allows them to burn the idols they have worshipped before it is too late.” Le Monde focused on the presidential candidates, praising the profiles of both men, as different as they may be.McCain the “reformer, able to ally himself with politicians across the aisle to correct faults in the system”; Obama “a once-in-a-generation candidate, representing a new era, in touch with globalization.” The paper expressed concern, however, with the events of recent days: “The Republicans are not talking about Mr. Obama’s choices in the domain of energy, or his economic proposals. They are tolerating, and even encouraging, racist slander, xenophobic lies and venomous rumors from the bigoted and supremacist extreme Right. If McCain prevails under these conditions, American will be at great risk of violence. If Mr. Obama is elected despite this atmosphere of hatred hope will carry the day, but the fear of violence will not disappear.”

Hatred is also at the center of the last big news story of the week: the affair of the Marseillaise sifflée. The French national anthem was booed at the start of a soccer match between France and Tunisia at the Stade de France, by an audience largely loyal to the Tunisian team. “It is in some ways an established ritual,” Dominique Dhombres remarked in his report in Le Monde, “The Marseillaise was booed at a France-Algeria game (October 2001) and a France-Morocco game (November 2007). The Tunisians were not going to do any less than the Algerians or the Moroccans. They would have been subject to too much shame the next day…And so the spectators, festive, joyous, for the most part friendly, draped in the Tunisian flag, booed. It was in fact fortuitous for Raymond Domenech: the boos meant for him were lost in the general din.” As soon as the match was over (which, incidentally, the French won 3-1), political leaders were competing over who could give the most outraged condemnation of the incident. Measures were taken: from now on, matches will be interrupted if the national anthem is booed. And thus a new dilemma: “How can you cancel a match and force thousands of rabid soccer fans to leave the stadium without risking total chaos? Who will willingly make this decision and interrupt a match, when allowing the match to continue will preserve order and the security of everyone in the stadium?” the sports daily L’Equipe asked. “The indignation demonstrated by a number of ministers over the booed national anthem is ridiculous,” Libération protested. “If the incident is to be taken seriously, it should be done from a political perspective. By booing the national anthem, a portion of the public expressed its anger over promises not kept by the Republic. This should be responded to politically.” Le Figaro took a more severe approach to the rabble rousers themselves: “Hatred, despair and anger were less catalysts for this behavior than pure delight in causing an uproar…The France-Tunisia game was a recipe for chaos. And the response proves that sports can both stir up bad feelings and heal the spirit. It has been written that relations between the two countries would never get better, but the opposite is true.”

Quote of the week: “Why not consider fiscal amnesty for our compatriots who agree to repatriate their capital, on the condition that they underwrite the States’s loans?” This proposal from Bernard Accoyer, the president of the Assemblée Nationale, provoked an outcry from the Left and discomfort on the Right, where leaders did not support the proposal. “The incredible indecency of Accoyer’s proposal for fiscal amnesty says a great deal about the degree of confusion and disrepute that shadows public discourse on the financial crisis,” Libération noted. “At a moment when the French, with a certain degree of patriotic heroism, leave their money in destabilized banks, those with their money in foreign markets should have been welcomed back to the fold to stabilize the economy.”

Number of the week: 112.3 million euros-the Elysée budget for 2009, an increase of 11.5% from 2008. This increase is being debated at the moment when the fiscal crisis is at its peak, and the government continues to insist its coffers are empty. “Never has the Elysée budget been presented in such an opaque and inaccurate way as it has been during this period of recession. Under these conditions, the Elysée should recheck its figures,” the politician and financial expert René Dosière said in an exchange reported by Le Monde. “At this rate, Nicolas Sarkozy will double the budget in 5 years.” In a cryptic press release, the Elysée admitted that the budget had increased, but “is not progressing.”

Person of the week: Olivier Besancenot. The leader of the French extreme left was at the forefront of the news this week, after it was discovered that he has been spied on for the last several months. By whom? The affair could be resolved quite soon, with the arrest of ten people by the national authorities: “Four of the ten people detained were let go the same evening. Among the six individuals still in custody, there are three police officers and two private detectives, but also the director of SMP Technologies, which distributes the Taser gun in France, Antoine Di Zazzo,” Le Figaro reported. The Taser gun, which has recently become part of police equipment, was harshly criticized by Olivier Besancourt during the presidential campaign. “It’s scandalous, it’s revolting….I feel like I’m in a bad movie,” Besancourt commented.