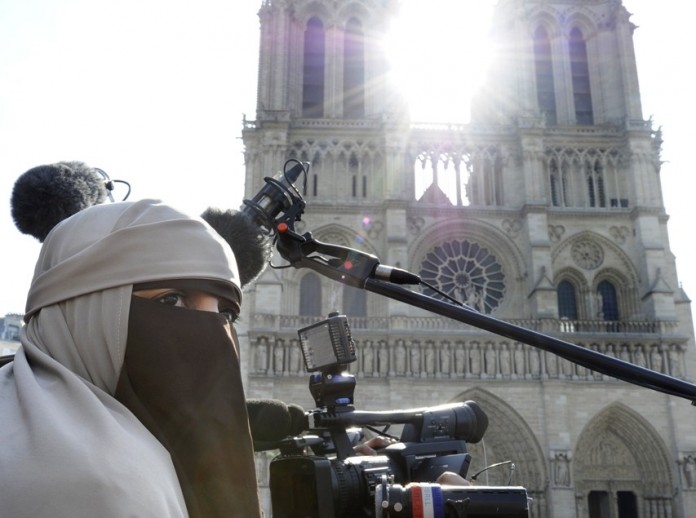 France’s ban on the full-face veil, notably the burqa and the niqab, went into full effect on Monday, April 11, after the six-month grace period following the controversial legislation’s passage in October expired, Al Jazeera reported. A fine of €150 given to a woman in the Parisian suburb of Yvelines that day was believed to be the first instance of the enforcement of the law, according to CNN. The law is the first enactment of a ban on full-face veils in Europe, though neighboring Belgium has initiated similar legislature. It has sparked controversy both in France and in the Muslim world. On Wednesday, March 13, a US-based terrorism monitoring service said that militant groups were calling on followers to promote attacks on France in protest, according to Reuters. France has the largest Muslim population in Western Europe, with about 5 million Muslims and an estimated 2,000 women who wear a full-face veil. The Christian Science Monitor explored the law as an indicator of a growing trend of suppressing Islam throughout Europe, while the Guardian addressed whether the law would be upheld in the European Court of Human Rights.

The French government announced on Wednesday, April 13, that it had finalized plans to reform the wealth tax that has been a centerpiece of President Nicolas Sarkozy’s financial reform for 2011, Nasdaq reported. As the government announced that it was eliminating a tax shield, a piece of legislation that prevents taxes from exceeding 50 percent of income, the bar for those required to pay a wealth tax will rise from €800,000 to €1.3 million, according to Bloomberg. The reform of the wealth tax will reduce tax revenue by €920 million, which will be compensated through other taxes, la Tribune reported. The suppression of the tax shield and the relief of the wealth tax have been criticized by both members of the left and the right, as explored by le Point, Boursier and le Monde.

Environmentalist and TV personality Nicolas Hulot, long anticipated as a potential candidate for the 2012 presidential elections, officially declared his intention to run in the primaries of the Europe Ecologie – Les Verts party. The announcement was met with a mixture of support and skepticism among critics of his lack of historical involvement with France’s green party, according to Rue 89 and Le Figaro. As each party’s primaries take shape, a poll appearing in the Nouvel Observateur on Wednesday, April 13, showed that 30 percent of French voters intended to take part in the Socialist primaries, where speculated but undeclared candidate Dominique Strauss-Kahn, committed to his role as director of the International Monetary Fund, would be considered the heavy favorite. For the Union for a Popular Movement (UMP), current President Nicolas Sarkozy was shown to be just behind Prime Minister François Fillon, whose 29 percent of votes surpassed Sarkozy’s 28 percent.

Finance Minister Christine Lagarde reduced slightly the government’s estimation for economic growth from 2.5 to 2.25 percent for 2012 as France seeks to place its deficit in line with the European limit of 3 percent of GDP, Le Point reported. In an interview with Les Echos, Lagarde explained that the adjustment was a prudent move as gas prices and other factors threaten to slow economic growth worldwide.