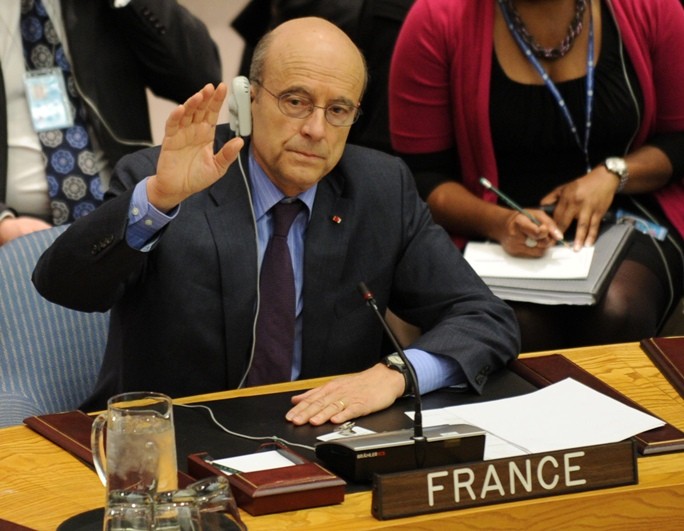 French President Nicolas Sarkozy urged the United Nations Security Council on Wednesday, March 16, to back a proposed bill to address the unrest in Libya, which included a no-fly zone over the war-torn nation, Reuters Africa reported. France joined Britain and Lebanon in circulating a resolution on Tuesday, March 15, that included “all steps necessary” to ban flights over Libya and to calm tension between the forces of leader Muammar al-Gaddafi and anti-government protesters. Foreign Minister Alain Juppé headed to New York to encourage the Security Council to approve the measure on Thursday, March 17, according to Reuters. Juppé’s mission was to encourage the Council to promote any step necessary short of a military occupation to stabilize Libya and protect protesters, Le JDD reported. Sarkozy’s administration highlighted the urgency of the measure as Gaddafi’s forces reached the eastern city of Benghazi, the hub of the rebel movement, the Washington Post reported. The Security Council voted in favor of the bill on the evening of Thursday, March 17, according to the New York Times. As France, Britain, and other European nations began talking about military missions, Libya declared a cease-fire on Friday, March 18, the Christian Science Monitor reported.

As France continued efforts to implement a no-fly zone in Libya and promote the losing anti-government rebel forces, Saif al-Islam Gaddafi, son of Libyan leader Muammar al-Gaddafi, claimed on Wednesday, March 16, that Libya had made major contributions to President Nicolas Sarkozy’s presidential campaign in 2007, claiming to have strong evidence and threatening to release it if France continues its efforts to quash the rule of Gaddafi father, the International Business Times reported. French Interior Minister, Claude Guéant, who served as a chief adviser for Sarkozy for four years, denied such contributions by the Libyan government, reminding France’s Europe 1 radio station that all contributions were audited by France’s Constitutional Council, according to BBC. Muammar al-Gaddafi did visit Paris in December 2007 after Sarkozy’s ex-wife had returned from Tripoli, where she had discussed the release of six Bulgarian doctors and nurses. L’Express explored the possibility that Gaddafi’s claims are true considering the maximum donor levels permitted by French election laws.

French President Nicolas Sarkozy announced on Thursday, March 17, that he hoped to visit Japan “as soon as possible” to demonstrate France’s solidarity with the crisis-stricken nation, Le Parisien reported. He mentioned a G8/G20 summit scheduled in China for March 30 and 31 as a potential time for Sarkozy to visit Japan. France was also among a number of nations to call this week for its citizens to evacuate either the nation or the area considered potentially hazardous surrounding the Fukushima Dak-chi plant, which has struggled to cool exposed radioactive materials throughout the week, the AP reported. France warned against trips to Japan, and encouraged those in Japan to either leave the nation or head away from Tokyo to the southern part of the nation.

The nuclear crisis in Japan resulting from an 8.8 magnitude earthquake and subsequent tsunami on Friday, March 11, creating damage and cutting off cooling structures at the Fukushima Dai-Chi power plant has sparked increased attention to the politics of nuclear power throughout Europe, causing many to question the role of nuclear power in France, as well, the Washington Post reported. France, which gets about 80 percent of its power from nuclear energy and which is an international leader in nuclear energy, has been stirred by a political discussion that had been long stagnant since the end of a strong anti-nuclear political movement in the 1970s. President Nicolas Sarkozy and his party assured the French throughout the week that the more than 50 nuclear power plants in France were safe. However, the minority Socialists seems more divided on the issue, as explored by Rue 89.

Manslaughter charges were filed against French airplane manufacturer Airbus after investigating Judge Sylvie Zimmerman met with the company’s lawyers on Thursday, March 17, Bloomberg reported. The charges allow for the continuation of an investigation into the causes of the crash of Air France Flight 447 from Rio de Janeiro to Paris, which killed all 228 aboard on June 1, 2009. No official causes for the crash can be determined without the recovery of black boxes, which have not been found in three search efforts costing about $27.5 million for the airline and plane manufacturer. Air France and Airbus will spend $12.5 million to finance another search operated by robots set to explore the mountainous ocean floor west of Brazil, Al Jazeera reported.

The Nouvel Observateur printed a BVA poll this week showing that one in two French people would prefer a candidacy by Prime Minister François Fillon over President Nicolas Sarkozy in the 2012 presidential elections. Foreign Minister Alain Juppé also was polled as receiving greater support with 48 percent of votes, opposed to Sarkozy’s 25 percent.