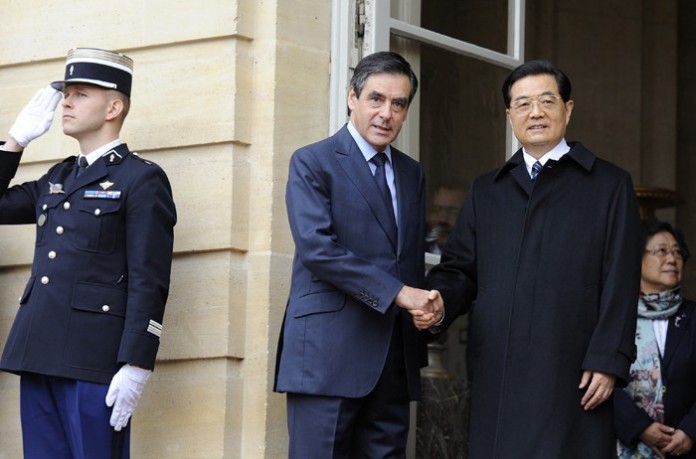 France and Britain, Western Europe’s two nations who spend the most on defense, signed a 50-year defense pact on Tuesday, November 2, NPR reported. The pact establishes a joint military force of 10,000, shared usage of military carriers, and the creation of two research centers on nuclear weaponry, according to Les Echos. Inspired by budgetary constraints and a joint desire to maintain the nations’ military strength the defense pact has stirred mixed reactions. While NATO has lauded joint operations between member states, EU officials have said the pact detracts from future Union-wide military efforts, according to Reuters.

Chinese president Hu Jintao arrived in Paris on Thursday, November 4, for a three-day visit. While members of the Socialist Party have voiced opposition to the administrations’ avoidance of human-rights discussions, the visit will focus on a number of joint business ventures between France and China, AFP reported. China Southern Airlines announced on Thursday that it will purchase 36 planes from French Airbus, while Alcatel-Lucent has signed 1.2-billion Euros in contracts with Chinese phone companies, according to Bloomberg. French energy giant Areva has been in negotiations over a potential 3-billion-euro deal, despite China’s 2006 official commitment to American Westinghouse. As France prepares to take over the presidency of the G20 on November 12, financial reform will be a prevalent discussion of the France-China summit.

A Paris court agreed on Wednesday, November 3, to extradite Rwandan Callixte Mbarushimana to the Hague, theWashington Post reported. Mbarushimana, who had received refugee status in France in 2003, was arrested in October and charged with 11 counts of crimes against humanity and war crimes for his remote work as executive secretary of the Democratic Forces for the Liberation of Rwanda (FDLR), which carried out a campaign of murder, rape, and destruction of property in neighboring Democratic Republic of Congo in 2009 to gain political influence in Rwanda, according to theNouvel Observateur. The court permitted the extradition to the International Criminal Court under the condition that Mbarushimana not be returned to Rwanda, where he faces additional charges, BBC reported. In addition to fears that he would not receive a fair trial in his native Rwanda, France does not extradite criminals to nations with the death penalty.

French President Nicolas Sarkozy was among a slew of prospective recipients of mail bombs sent earlier this week from and within Greece. On Monday, November 1, police in Athens arrested two men carrying a package addressed to Sarkozy later determined to contain a bomb, the Wall Street Journal reported. In addition to Sarkozy, mail bombs were sent to Italian Premier Silvio Berlusconi and German Chancellor Angela Merkel. While the Greek bombs were deemed unrelated to bombs discovered on cargo planes from Yemen on Friday, October 29, Brussels has called on a team of security experts to discuss what measures Europe must take in preventing future threats, Le Monde reported.

The UMP, President Nicolas Sarkozy’s political party, hosted its first of ten “rendez-vous pour la France” in Paris on Wednesday, November 3, AFP reported. In a series of ten meetings to establish the party’s future platform leading up to the 2012 presidential elections, the first meeting focused on education.  As the party looks forward 17 months prior to the election, the first meeting was plagued by uncertainty about party leadership, according to Le Parisien.

Within a series of finance reforms for 2011, the French parliament voted on Tuesday, November 2, to end free health care for the poorest illegal immigrants or “sans-papiers.” State Medical Aid (AME) was created in 2000 and provided free health care to 215,000 sans-papiers in 2009, according to Le Télégramme. Sans-papiers will now have to pay an annual fee of 30 euros for access to health care. An article in L’Humanité expressed concern about ending health care to the most vulnerable portions of French society while exploring the rationale behind the decision.

See also: A French-American Foundation / Harris Interactive study showed that 67 percent of French respondents supported the provision of health care for illegal immigrants, compared to 36 percent among their American counterparts.