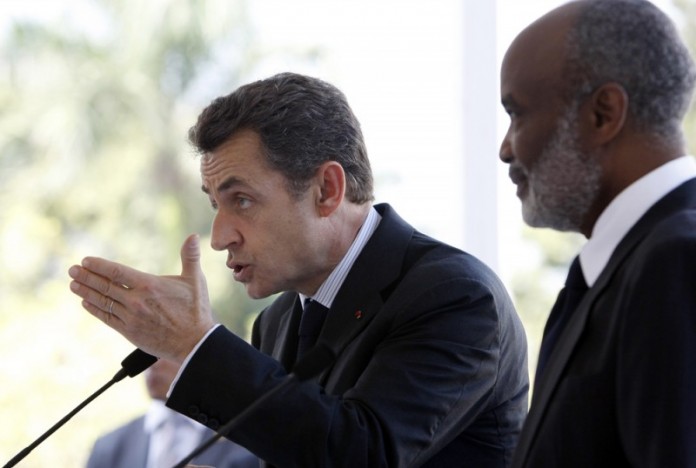 President Nicolas Sarkozy visited Haiti on Wednesday, February 17, thus becoming the first French President to visit the country since it gained independence and became the first black republic in 1804. Sarkozy presented a plan to help rebuild the former French colony that included the cancellation of €56 million ($76 million) in debt owed by Haiti, €100 million ($136 million) of funds to be provided over two years and €65 million ($89 million) to be channeled through the European Union. France will also provide ten experts to work with Haiti’s Prime Minister and his staff on the recovery effort during these two years.

French President Nicolas Sarkozy’s official visit to the country’s overseas territories of Martinique and French Guyana this week has been overshadowed by the controversial statements made by the minister in charge of the region, Marie-Luce Penchard. During a regional election meeting, Penchard said that she wished to “serve only one people, the Guadeloupian people“. A native of Guadeloupe, she is also running as the UMP party’s candidate for Guadeloupe in regional elections next month. The opposition Socialist Party immediately called for her resignation, accusing her of “regionalism”. The controversy threatens to be detrimental to Sarkozy’s tour of the region, which aims in part to shore up support for his UMP party ahead of the regional elections.

France’s military purposely exposed soldiers to a  nuclear test in the Sahara Desert in 1961 in order to study how the atomic bomb would affect their bodies and minds, according to a classified defense document, the AP reported on Tuesday, February 16. In total, France conducted 210 nuclear tests, both in the atmosphere and underground, in the Sahara Desert and the South Pacific from 1960 to 1996. After decades of pressure from victims, the French government finally agreed last year to compensate them for any resulting injury. The military document, drawn up in 1998, said the test was designed to “study the atomic weapon’s physiological and psychological effects on man, to obtain elements necessary to prepare them physically and morally for modern combat,” Le Parisien said.

On Wednesday, February 17, France’s highest court overruled a lower court’s acquittal of five former inmates of the Guantanamo Bay prison and ordered an appeals court to rehear the case. The Paris criminal court convicted the five men of “criminal association with a terrorist enterprise” in 2007, after they had acknowledged having spent time in military training camps in Afghanistan. The men, who were arrested in Afghanistan in 2001, each spent a total of 2.5 to 3 years in custody at Guantanamo and in France, to which they were repatriated in 2004 and 2005. France is among the few Western countries to prosecute nationals who have returned home from Guantanamo.

The French Parliament unanimously voted on Tuesday, February 16  in favor of the creation of  a daily 49-euro benefit for a period of 21 days for people stopping their professional activities to stay and accompany relatives who are about to die. In a rare occurrence of unanimity, all the deputies present approved the bill.

– An op-ed in Le Monde written by the president of Université Paris-Diderot that compares French and American research and tries to explain why France’s institutes of higher education remain attractive to American scholars despite their modest means.

President Barack Obama announced the appointment of Rashad Hussain, a White House lawyer, to be his special envoy to the Organization of the Islamic Conference (OIC) on Saturday, February 13 during a video address to the 7th U.S.-Islamic World Forum meeting in Doha, Qatar. Hussain will work as a liaison to the OIC and work towards improving relations between the U.S. and the world’s Muslims. In the video address, Obama touched on the plan to remove all U.S. combat troops from Iraq by the end of August, and his administration’s efforts to return Israelis and Palestinians to the negotiating table to jump-start stalled peace talks. Obama has made repairing U.S. relations with the Islamic world an important element of his foreign policy, an effort highlighted by his call for a “new beginning” in his Cairo speech last June, Le Figaro pointed out.

President Obama took a step toward improving relations with Syria on Tuesday, February 16, by appointing a United States ambassador to Damascus. This appointment comes five years after the withdrawal of the US ambassador to Syria following the assassination of former Lebanese Prime Minister Rafik Hariri, as Damascus was held responsible for the murder. This announcement is part of the American effort to renew dialogue with Syria, viewed as vital to peace in the region.

Ignoring strong Chinese objections, U.S. President Barack Obama met with the Dalai Lama at the White House on Thursday, February 18. During the meeting, Obama expressed his “strong support” for human rights and Tibet’s ”unique” linguistic, cultural and religious identity. This visit occurs in the midst of tense Sino-American relations, following the U.S. sale of defensive arms to Taiwan, the alleged Chinese cyber attack on Google, the Copenhagen Summit disagreement and China’s refusal to impose tougher sanctions against Iran.

A Haitian judge freed eight of the ten American missionaries that were arrested last month on charges of the attempted kidnapping of 33 Haitian children. The judge indicated that no evidences of criminal intent among these eight people were found. However, he ordered the leader of the group, Laura Silsby, and another woman, Charisa Coulter, to be held in custody for further questioning in light of previous trips to Haiti.

A French court found a dozen French winemakers and traders guilty of selling 18 million bottles of fake Pinot Noir to leading U.S. buyers on Wednesday, February 17. The wine was commercialized under a popular Pinot Noir label called “Red Bicyclette” but was made with far less expensive grape varieties. Many in the Languedoc region worry that such a case may have terrible impact on their industry, already in crisis.

As Greece has become the “epicenter of global financial anxiety,” records and interviews show that Goldman Sachs could have played a major role in Greece financial crisis by helping the country hide its debt since 2001. The bank allegedly developed tools that allowed Greece to borrow while dissimulating the greatness of its debt over several years. Greece announced that the operations made with Goldman Sachs were above board and that they would be explained in a letter sent by the finance minister to the European Union on Friday, February 19.

The national pharmacy chain Walgreen agreed to buy Duane Reade’s 257 drugstores in the New York area, for about $620 million and assuming $457 million of Duane Reade debt. This represents the largest acquisition Walgreen has ever done, and will provide the company with a leading position in the U.S. drugstore market.

A year after the financial market collapsed, BNP Paribas reported an annual result close to €6 billion for the year 2009, thus beating most analysts’ predictions. In addition, Société Générale just released its fourth quarter results for 2009 at €221 million, thus more than doubling its results from the same period the year before. This global resistance of the French banking industry is opening the year 2010 with optimism, as underlined by The Wall Street Journal.

On Wednesday, February 17, US President Barack Obama defended his $787 billion stimulus package, which he declared saved two million jobs and lowered taxes for 95 percent of Americans, while avoiding a Great Depression. The declaration has triggered a furious debate between Republicans and Democrats on whether the bill was a great waste of taxpayer money or a success in saving the U.S. economy from disaster.

A Ukrainian supreme administrative court said Wednesday, February 17 that it has put on hold the results of the February 7 presidential election won by Viktor Yanukovych until it finishes hearing a legal case challenging the polls from rival candidate Yulia Tymoshenko. Tymoshenko has filed a complaint with the court demanding that the election results be invalidated due to what she says were mass falsifications in the vote. International observers have described the elections as fair and democratic and Western governments have joined Russia in congratulating Yanukovych on his victory.

The Committee to Protect Journalists reported this week that 71 journalists were killed worldwide in 2009, making it the largest annual toll in the past 30 years. 31 of the deaths came from a single massacre of journalists in the Philippines, making it the worst country for journalists, ahead of Somalia and Iraq. Moreover, China and Iran had, at the end of 2009, the highest number of journalists incarcerated, with 24 and 23 respectively.

In her recent visit to the Middle East, Hillary Clinton, US Secretary of State, said at a televised town hall-style meeting of students at a university in Doha, Qatar, that Iran was becoming a military dictatorship. Clinton indicated that the U.S. has no plans for military action against Iran over its nuclear program but will keep working toward tougher sanctions. During her visit, Clinton also stressed the need for fundamental human rights to be applied in Qatar, while pleading for patience in the peace process.

International arrest warrants have been issued for 11 suspects accused of a highly sophisticated operation — much of it caught on security cameras — in the killing of a Hamas leader in Dubai last month. Mahmoud al-Mabhough was apparently electrocuted and suffocated in his room at a luxury hotel on January 19. In an interview with the local press, Dubai’s chief police blamed Israeli’s intelligence agency Mossad for the killing.

The first DNA study ever conducted on ancient Egyptian royal mummies solved several mysteries surrounding the teenage King Tutankhamen, researchers said on Tuesday, February 16. The tests found that he had contracted malaria, which, combined with a degenerative bone condition, cut his life and reign short at the age of 19 in about 1324 B.C.  The study turned up no evidence of foul play, as had been suspected by some historians and popular writers for many years. The study also showed that Tutankhamen was the son of King Akhenaten and his sister, incestuous alliances being common in Egypt’s royal families, the scientist explained.