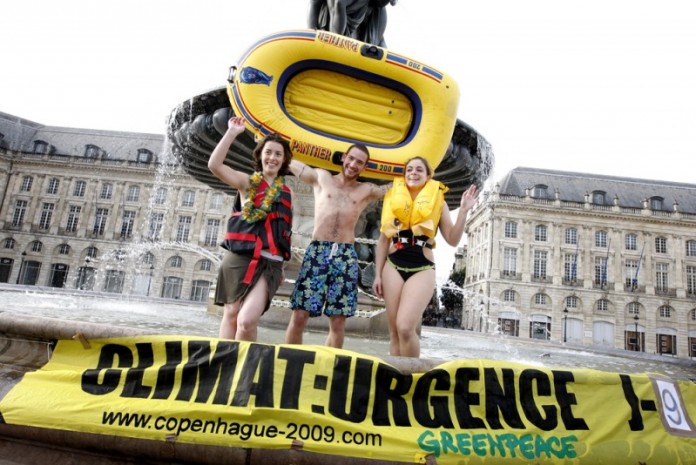 In his address from West Point Military Academy on Tuesday, President Obama announced his plan for the war in Afghanistan. In a report by the Washington Post, the President confirmed the deployment of “30,000 additional troops,” and committed to “leaving Afghanistan [by] July 2011.” However, according to Politico, the President has received much “criticism from [both] the left and [the] right,” including that from liberals who oppose the war in general, and Republicans who support the surge of troops but not the limited timeline. Internationally, France has shown support for President Obama’s plan, according to Le Point, but has not committed to sending more troops, as of yet. Britain, on the other hand, has ensured a small “deployment of 500 extra troops.” (Guardian)

In other Afghanistan-related news, an article on the American Interest online, written by Walter Russel Meade, discusses the touchy subject of the French-American military relationship, particularly in regards to the war in Afghanistan. In his article, Meade urges President Obama to spend more time with French President Nicolas Sarkozy to not only garner his support, but to learn a thing or two about why President Sarkozy has given a strict “non” in regards to sending more French troops to Afghanistan. Mr. Meade recently participated in a panel discussion co-sponsored by the French-American Foundation and The Maison Française of Columbia University. Please click here to listen to the panel discussion.

On Monday, CNN reported that the Senate health care bill debate got off to a very rocky start. As in previous weeks, members of the GOP remained staunchly oppositional and asserted that seniors would suffer from cuts in Medicare if the bill passed. However, according to the Baltimore Sun, the AARP, the “nation’s leading advocate for seniors,” doubts senior benefits would be “jeopardized” as a result of the bill. Once it is finalized in the Senate, the bill will be combined with the House’s version before it can be voted on again, and then sent to President Obama for approval.

While world leaders will be aggressively tackling climate change in just a few days at the Copenhagen Climate Conference, the U.S. Senate is having a harder time addressing the issue. According to NPR, the Senate’s Climate Change Bill has been pushed back and will not be addressed until Spring 2010, supposedly due to the shift in focus towards the Health Care Bill. In addition, Politico reported that some Senate Republicans who originally supported the bill have “flip-flopp[ed]” their stance, and even begun to “[question] the science behind global warming.” This means the when the bill resurfaces, Democrats will have even more work cut out for them if they want to ensure that climate change legislation get passed.

On Wednesday, the New York State Senate rejected a bill that would have legalized gay marriage in the State of New York. According to The New York Times, the 38 to 24 vote was a huge disappointment for gay-rights advocates, while for those fighting to prevent gay-marriage, it was “an enormous victory,” as stated in a report by MSNBC. Currently, there are only five states (including New Hampshire, as of January 2010) that legally recognize gay marriage, and the bill’s supporters were hopeful that New York would be the sixth, given its predominantly liberal constituency. In the meantime, activists on both sides of the issue will focus on New Jersey where there is a possibility that the “state legislature [will take] up the issue” before January.

FRANCE
According to the Winnipeg Free Press, French Greenpeace activists “scaled” the National Assembly building in Paris on Wednesday with banners calling for President Sarkozy to take serious steps to reduce carbon emissions when he attends the Copenhagen Climate Conference later this month. In addition, Le Monde reported that the activists also gained access to the interior of the building and interrupted an assembly session by trying to unfurl a similar banner reading: “Aux actes Monsieur le president.” Although the militants were detained by pompiers, their actions were “hailed” by some French Green Party members who support their cause.

Libération reported on Wednesday that Liliane Bettencourt, heiress and largest shareholder of L’Oréal, is battling with her daughter Françoise Bettencourt-Meyers over the right to manage her own money. According to the BBC, the controversy began when Mrs. Bettencourt “gave away” €1 billion to photographer and friend François-Marie Banier. According to Mrs. Bettencourt-Meyers, the massive “gift” was an indication that her mother is not mentally sound enough to manage her fortune, and prompted her to take legal action to “protect [her mother] from exploitation.” The French courts will decide whether or not Mrs. Bettencourt needs to be “placed under court authority,” and there is no mention as to whether or not the matter has affected business at L’Oréal.

The Telegraph reported on Wednesday that visitors to Paris will be sorely disappointed when they realize that several of the city’s most celebrated attractions are currently closed due to strike. According to The Connexion, the strike began at the Centre Pompidou where the culture ministry is planning to do away with nearly half of the positions held by senior, or “over-50’s,” employees once they retire.  In an act of solidarity, employees of other national museums and monuments in Paris, including the Louvre, the Rodin museum, and the Arc de Triomphe have joined the strike and many institutions have either closed completely or are offering visitors only limited access to select parts of their facilities.

Ebay, the internet shopping giant, was fined $2.5 million for selling LVMH (Louis Vuitton Moët Hennessy) perfumes on its website. According to the Los Angeles Times, Ebay reached an agreement with the Parisian Commercial Court in 2008 stating that it would update its technology to prevent sellers from putting LVMH fragrances up for auction (as requested by LVMH). While Ebay executives claim they took extensive steps to comply with the court’s ruling, some online sellers of LVMH fragrances have found ways to fool the system. As a result, France Info reported that the company is liable for the sale of fragrances that skirt online security because it violates France’s “selective distribution” laws in which French manufacturers have the right to control how their products are sold.

The Detroit News reported on Wednesday that Fritz Henderson, the short-lived CEO of GM, is stepping down from his position. Apparently, Henderson was on shaky ground when the board overturned his plan to sell GM’s German branch, Opel. While the U.S. government is a primary shareholder of the company, the White House “den[ied] any involvement,” and confirmed that the “decision was made by the board of directors alone,” according to Al Jazeera. Henderson held the position for a mere eight months and while some of his colleagues confirm that he performed very well following the company’s bankruptcy filing, many felt “that changes needed to be made.”

Rupert Murdoch, the media mogul and owner of News Corp, spoke out in Washington on Tuesday against a potential government bailout plan for the newspaper publishing industry, according to the Financial Times. Mr. Murdoch claims that the newspaper industry would fare better in the long run if “unsuccessful publishers [were] allowed to fail.” Meanwhile, The Atlantic reported that Mr. Murdoch is trying to keep his own company out of the red by discussing an “exclusive rights” agreement with Microsoft in which the tech giant would have unlimited access to Murdoch’s Wall Street Journal for a fee. Google, one of Microsoft’s fiercest competitors, responded by stating that it will start to “limit the number of free articles” it makes available to visitors on its Google News website.

According to a report in Thursday’s Business Week, media giant Comcast will become the majority shareholder of NBC Universal, owning 51% of the company, while GE will remain a minority partner in the “joint venture.” However, some analysts and critics say that the deal may never close if certain government regulations- specifically those intended to limit Comcast’s power- come to fruition. Additionally, the French media company Vivendi has opted to sell its 20% ownership of NBC Universal for “$5.8 billion,” according to Les Echos, but will have to wait almost a year before the deal is finalized.

On Tuesday, Al Jazeera reported that Switzerland has received tough criticism in response to its ban on the construction of mosque minarets. The towers, which are traditionally used for the “Muslim call to prayer,” are architectural symbols of the Muslim religion, and many Muslim advocates around the world are viewing the referendum as an “expression of [religious] intolerance,” as well as a human rights violation. In France’s Provence region, where there are numerous Muslim residents, the construction of mosques and minarets has also been controlled, but more as a way to blend in with the natural landscape and urban fabric, according to La Provence. While some locals in the area are bothered by the mosques’ lack of visibility and traditional architecture, French Muslim leaders have claimed that it is nothing compared to the “shock[ing]” and utter “discrimination” demonstrated in Switzerland.

The Financial Times reported on Wednesday that Iran will continue to enrich its uranium “stock” to a level of 20 % purity, despite insistence from France, the U.S. and Russia that it must maintain a level no higher than 3.5%. At 20%, Iran is inching closer to the 90% mark at which uranium can be “used to make a nuclear weapon.” Le Nouvel Observateur reported that while Iranian President Mahmoud Ahmadinejad claims he wants to “cooperate” with world leaders, he also stated that it would be “impossible” for anyone to impose nuclear sanctions on his country.  In a similarly contradictory manner, President Ahmadinejad plans to move forward with the construction of “ten new [uranium enrichment] factories,” while claiming that he has ” [no] interest in developing nuclear arms, ” according to the AP.

In honor of World Aids Day on Tuesday, South African President Jacob Zuma made a pledge to “provide treatment for all HIV-positive children” in South Africa, according to the Christian Science Monitor. His efforts are a dramatic improvement from those of former President Thabo Mbeki, whose naïve and damaging views about the virus’s cause, as well as its treatment, have driven some African leaders to discuss “[charging him with] genocide.”  In similar news, the Telegraph reported on Monday that the Royal Academy of Science published several studies claiming that a large portion of HIV cases in Africa are caused by “dirty needles” used during routine medical procedures. This information could prove useful when President Zuma decides how to implement his new HIV policy.