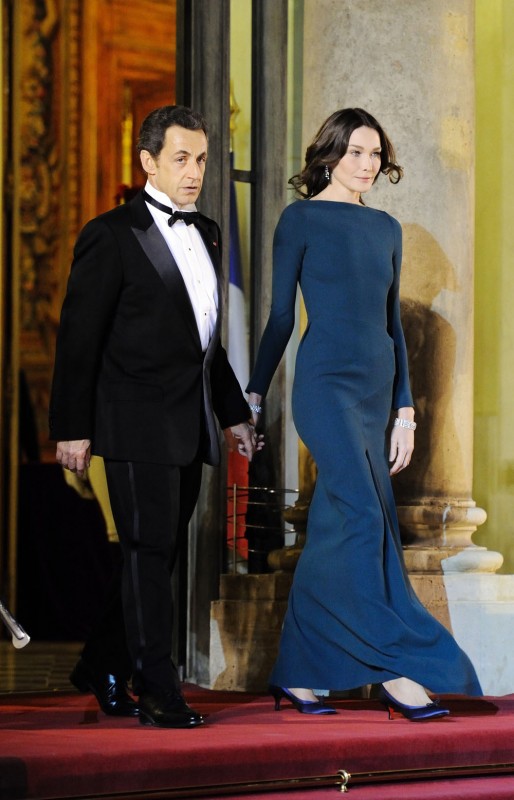 After initial reports surfaced in the independent French blog suchablog.com, major newspapers across the world have begun to report a story out of Paris which will no doubt gain momentum in the coming days: according to the UK publication The Telegraph, the First Lady of France, popular singer and former supermodel Carla Bruni-Sarkozy, is involved in an affair with fellow French singer Benjamin Biolay. It is now being reported in the Times of India that rumors surrounding her husband, President Nicolas Sarkozy, 55, have also begun to surface: apparently he has been seeing the French Environment Minister, Chantal Jouanno.

Bruni, 43, who has never been known for keeping mum, fueled rumors recently in an interview with Sky News. When asked whether her husband was “forever,” she replied “I guess marriage should be forever but who knows what happens? I wish it was forever, that’s my hope…but we could be dead tomorrow.” It is believed that Madame Sarkozy is currently living with Mr. Biolay, 37, in an apartment in Paris, rather than at the Elysee with Sarkozy.

While this news swirls around the globe (and Twitter tweets the rumors twenty-four hours a day), the French press is staying characteristically quiet: thus far only Métro, a free daily tabloid, has officially reported on the rumors, and a lone blog post on Le Journal du Dimanche‘s website was quickly taken down. LePost.fr did report on Carla Bruni’s suspect interview with Sky News, but was quick to point out that she gave the interview before there was any word of problems in her marriage, and that she called  her relationship with her husband “a fairy tale.”

The French press has always been intensely critical of the American media for sensationalizing political sex scandals like the Clinton/Lewinsky affair in the 1990s and Eliot Spitzer’s prostitution case in 2008, and it looks like they’re sticking to their guns when it comes to political sex scandals of their own. But as the twenty-four news cycle continues to spew out the alleged details of the Bruni-Sarkozys’ extramarital activities, it may remain more difficult for French media to stay silent on the subject.