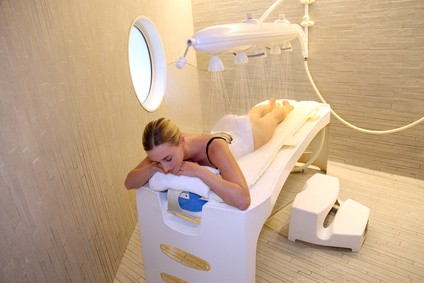 Vichy is both cursed and blessed. Cursed because the collaborationists chose it as their puppet government headquarters during World War II; and blessed because this meant its beautiful architecture was never bombed. It’s the latter that first strikes you upon entering this compact city of 78,000 inhabitants. Art Nouveau, Art Deco, Neo-Baroque, Neo-Gothic, Neoclassical – it’s all here, as resplendent today as it was before the Nazi-appeasers so rudely took over. A short stroll around the centre of town will give you ample opportunity to absorb it all.
When we arrived in Vichy on a sunny September Sunday, Franck Chavaillon, from the city tourist board, was at pains to explain Vichy’s attempts to shake off its collaborationist past and reinvent itself. He started off by asking us what image we had of the city. “Vichyssoise soup and Marshal Pétain’s collaborationist government,” I told him after a moment of cautious reflection. “Just as I thought,” he said. “You see, we’re trying to change all that. When people think of Vichy, we want them to think of sport, health, fitness and the spa baths. In fact we’re pushing to become the number one city in Europe for health tourism.”

Franck’s task may prove to be easier than he thinks. With its superb sports amenities, multiple parks and excellent spa facilities, the city positively oozes health. We spent a morning being kneaded, sprayed and generally pampered in Les Celestins spa, before admiring the various courts, pitches and auditoria on the western side of the Lac d’Allier. As well as eight football and two rugby pitches, an athletics track, 35 tennis courts, a hippodrome, a climbing wall, an archery range and a 50-metre swimming pool, there’s also a huge omnisport centre, a nautical centre, two 18-hole golf courses, the 100-hectare sporting lake and – check this out – a boulodrome. Yes, a whole indoor stadium, just for boules. No wonder that so many professional sports teams train here and that 110 sporting associations have based themselves permanently in the city.

That afternoon we were offered a tour of the city proper, on the eastern side of the Lac d’Allier. As we strolled through the manicured parks (there are 180 hectares altogether) and vibrant streets, we brushed shoulders with chic older couples out window-shopping. The women, in expensive Parisian designs, gravitated towards the more expensive shop fronts, while the men, with cashmere sweaters draped round their necks, baulked at the price tags and desperately tried to drag them away. The Vichyssoise youngsters, meanwhile, were seen gracing the pavements outside the numerous cafés, consuming coffee and tobacco in equal amounts. We were given a tour by an official city guide. In his booming actor’s voice he described the various stages of Vichy’s rich history and culture while leading us round the town.

Thanks to the curing properties of the thermal springs, visitors have been coming to Vichy since Gallo-Roman times. Back then it was known as Aquis Calidis – ‘hot waters’ – and the principle has remained pretty much the same ever since: you immerse yourself in the hot spring water to soothe the skin, then drink the cooler spring water to soothe your insides. Our experience of it was markedly more enjoyable than one of Vichy’s most famous regular visitors from the past. Back in the 1670s the Marquise of Sévigné, one of France’s most famous female writers, popularised the resort after describing it vividly in many of her letters. But she wasn’t always complimentary. This is how she described it in an epistle to Madame de Grignan: “So, my dearest, I tried out the waters this morning. Oh, how foul they are! …You all drink and, because the waters are boiling hot, with a horrible taste of saltpetre, you then pull the ugliest of faces. You stroll up and down, here and there, listen to Mass, walk around, vomit up the waters, and talk confidingly about the manner in which you vomited up; and that’s about all there is to it until midday.” The Marquise’s description must have been a little tongue-in-cheek, however, since Vichy’s waters are supposed to have cured her of the rheumatism in her hand and therefore enabled her to become so famous for her letters. But if the hygiene was as bad as she described it then, rest assured, it has improved beyond recognition since.

Vichy was a magnet for health-conscious tourists a long time before the Marquise of Sévigné, and has been ever since. But things really got going during the Second Empire, between 1860 and 1890, when Napoleon III introduced Parisian boulevards, southern-USA-style villas, the town’s casino and much of its stunning English-style parkland. This was followed by what’s known as La Belle Époque, during which the opera house, the thermal spring buildings and dozens upon dozens of beautiful hotels were constructed. Everywhere you turn in Vichy you are presented with these wonderful hotel facades with their jutting balconies, ornate railings, curled cornices and outstanding entrance halls. At the height of the thermal spring tourist boom, just before WWI, more than 100,000 bathers a year used to visit the city. Even today there are more than 2,000 hotel rooms available. Some of the more impressive ones are those at the Aletti Palace, the Hôtel Ruhl, the Hôtel Astoria, the Hôtel des Bains and the Hôtel du Parc. If Art Nouveau and Art Deco turn you on, then you’ll be positively drooling.

Our guide explained how this glut of hotel accommodation was the reason that, during WWII, Pétain chose Vichy as its government headquarters for non-occupied France. Combined with its excellent telephone exchange, the city made the perfect nerve centre from which to govern what became known as ‘Vichy France’ or ‘the Vichy Régime’. Since the numerous hotels and modern telecommunications were a direct result of all the tourism, you could say that if it hadn’t been for the city’s spa baths, Pétain would never have chosen Vichy as his headquarters. The poor city’s inhabitants have been living with the shame ever since. Even today, visitors from other parts of France still mock the Vichyssois for being ‘collabos’.

I’d been told they were a thick-skinned lot, but I was still cautious not to mention the war too often. Fortunately our itinerary gave us plenty of opportunity to focus on Vichy’s grandiose present rather than its past. That evening we were treated to dinner at the Brasserie du Casino. As we enjoyed our fish and crisp white wine, we were surveyed by the hundreds of framed photo portraits on the brasserie walls. Most of them were B-list French celebrities who had once dined there after catching a show at the opera house over the road. I searched among the faces for someone I recognised, but the only one who jumped out was Gérard Dépardieu. On the way back to the hotel we stopped off at one of the late bars in the city centre. Here Vichy’s teens and 20-somethings looked like they were getting ready to party late into the night. While their parents and grandparents may still be secretly haunted by the ghost of Pétain, these youngsters come from a generation that is looking in only one direction: to the future. 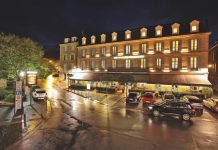