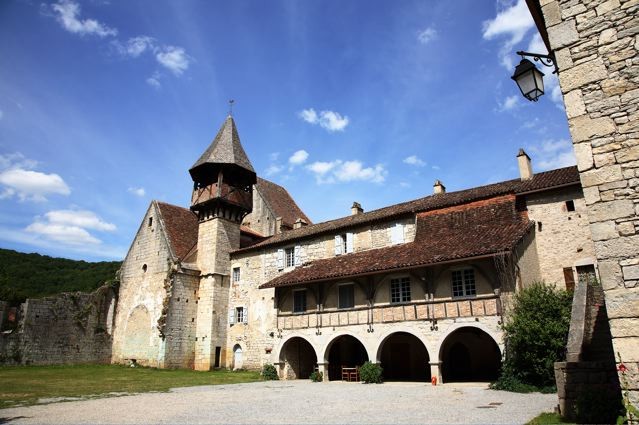 Imagine a ribbon of jade, or sapphire, meandering through ever-changing landscapes—woods, meadows, gorges, cliffs, vineyards, farmland, orchards…. But in fact there’s no need to imagine, it’s there to behold—the Lot, the longest river in southwest France. It’s a sinuous river, winding for almost 300 miles, but only 124 as the crow flies, and it affords a new surprise at every bend. The best is to discover it in the early morning, seeing it from above as the mist gradually lifts—coming down from the Auvergne along the gorges of the river Truyère, for example. It’s a memorable sight.

The Lot begins as a lively narrow mountain stream on Mont Lozère in the Cévennes; by the time it flows into the Garonne, at Aiguillon, it has widened with the waters of many tributaries—notably the Truyère, the Dourdou and the Célé—and slowed its pace. It will have meandered through five départements in four regions, past contrasting landscapes shaped by a diversity of soils—granite, limestone, sandstone—and a ravishing array of stone villages dotting riversides, hilltops and cliffs. The stretch between Saint-Côme-d’Olt and Estaing in the upper valley, the Pays d’Olt (the Lot’s original Celtic name), is a UNESCO World Heritage site. Pitched roofs of dark, hand-hewn schist tiles called lauzes blend in harmony with bejeweled Romanesque churches in age-old stops along the pilgrim route to Compostela: the church of Perse outside Espalion; Saint Pierre in Bessuéjouls; not least the great abbey church of Conques, near the river Dourdou. Rising from a deep conch-shaped valley, Conques is one of France’s most beautiful villages, and not to be missed.

Although this stretch of the river was never navigable, it was still the lifeblood of the valley’s people. Witness the wooden balconies of the old riverside tanneries, now flaunting their geraniums near the 11th-century bridge in Espalion, or the prosperous bourgeois townhouses of Saint-Geniez-d’Olt. Both towns sent their textiles and leather overland to Entraygues, to be loaded on boats to Bordeaux and on to colonies across the Atlantic. Houses in the flowery village of Sainte-Eulalie-d’Olt even have walls made of riverbed pebbles.

Don’t miss the delightful village of Estaing itself, with its Gothic bridge and colossal Renaissance castle, now the property of former French president Valéry Giscard d’Estaing. A good place to taste and buy the wine is La Maison de la Vigne, du Vin et des Paysages d’Estaing, just on the edge of town.

Entraygues was the riverhead for navigation, where the Lot and the Truyère meet. It was once the only link between Bordeaux and the Auvergne, defended by a fortress castle as well as two towers—now gone—on the 13th-century Gothic bridge across the Truyère. Today the restored vines and their chenin blanc grapes yield light, fruity, dry whites that are excellent companions to the local cabécou goat cheese. That was an age-old symbiosis: the goats fed on chestnuts from the trees above the vineyards, and in turn supplied milk, cheese, fertilizer and goatskin wine flasks.

Le Fel is dramatically beautiful—its vineyards are said to be the steepest in France. Its wines are predominantly red, well-rounded and velvety, good accompaniment for the rustic regional fare. The Auberge du Fel serves excellent concoctions, made with fresh local products, on a cheerful terrace facing the mountains. Domaine de Méjanassère, a working vineyard with a fantastic B&B and restaurant, is altogether paradise on earth. Despite its popularity, the place remains serene, with plenty of secluded nooks and the odd lone deck chair for getting rid of city stress.

Navigation on the Lot was a perilous business—the river was unpredictable, its bends treacherous. The flat-bottomed boats called gabarres often had to be towed upstream by haulers on shore. Among the staples traveling upriver was dried Norwegian cod (called stockfisch or stockfish) that, after arriving in Bordeaux, was floated in the water fixed to the stern of the gabarres. By the end of its eight-day journey it was nicely rehydrated and ready to cook.

When potatoes were introduced in the late 18th century, they were wedded to the cod to make estofinado, which became the Lot Valley’s traditional Friday and Lenten dish, and emblematic of the 19th-century coal miners of Decazeville. Although some historians refute the legendary stockfish tale, the estofinado—potatoes and cod, mashed with a splash of walnut oil, hard boiled egg, parsley, garlic and a dash of cream—is a delicious comfort dish. Try it at the riverside café-restaurant Chez Marie, at Le Grand-Vabre near Conques, then take the winding road up to the gorgeous perched hamlet of La Vinzelle.

At Laroque-Bouillac the Lot enters the limestone plateau of the Quercy, and another world. Small oak and red-tiled roofs take over, often awash with a luminous sun. Here the country’s best lamb, incomparable melons, foie gras, truffles and saffron are for sale in the many producers’ markets. The Saturday morning market in Figeac, for example, is held on Place Carnot and Place Champollion, against the backdrop of the city’s admirably preserved medieval heritage. Thanks to the wool and flax industry along the river Célé, Figeac became a flourishing trade and banking center in the 13th century. Place Champollion honors Figeac’s native son, Jean-François Champollion, who deciphered Egyptian hieroglyphics. The fascinating Musée Champollion–Les Ecritures du Monde is dedicated to the history of the written word.

The D41 road from Figeac follows the Célé to join the Lot at Bouziès, winding down a valley of luxuriant greenery and stunning cliffs, leading to the enchanting villages of Espagnac-Sainte-Eulalie and Marcilhac-sur-Célé. At Saint-Sulpice, take a detour to La Ferme du Mas de Thomas, a goat farm hidden among the oaks, renowned for its Rocamadour cheeses. Farther west, near Cabrerets, the caves of Pech Merle are famed for their prehistoric wall paintings. Once on the Lot, head to Bouziès for a river cruise, or rent a houseboat, and savor the valley while gliding on the river, disconnected from daily care.

Nearby, overhanging a cliff, red-roofed Saint-Cirq-Lapopie affords spectacular views from its castle ruins. When André Breton chanced upon Saint-Cirq, he “stopped desiring being elsewhere,” he said, and bought its 13th-century inn, where he entertained his Surrealist guests. Beautifully restored, Saint-Cirq is a popular tourist destination.The Rignault Museum, the former home and fragrant garden of painter and art collector Emile-Joseph Rignault, now hosts traveling exhibits.

Farther downstream, Cahors fills a peninsula formed by a meander of the Lot. In Gallo-Roman times it was already an important junction on the roads to Bordeaux, Toulouse and Rodez, called Divona Cadurcorum, after a Celtic goddess who lived in a natural spring grotto—La Fontaine des Chartreux—that still supplies the city’s water. Cahors is an attractive town, with leafy arteries and pink houses evocative of Toulouse. Hundreds of medieval houses testify to its former prosperity, as does the 14th-century Pont Valentré with its three powerful towers. Legend says the bridge was built with the devil’s help, in exchange for the architect’s soul, hence the little stone devil clinging to the center tower, added during a 19th-century restoration.

The Wednesday and Saturday morning market in Cahors, in the shadow of the Romanesque/Byzantine cathedral of Saint Etienne, is a mouthwatering spectacle. Prolong the pleasure at Michelin one-star Restaurant Marco, at Lamagdelaine just outside of town, where you can also stay overnight. Whether you dine on the terrace or in the vaulted dining room, you’ll find that the Quercy lamb here is blissfully married to thyme, foie gras to truffles, and pineapple to saffron—unless you crave a more Mediterranean touch as a nod to the Marco family’s Spanish roots.

Cahors is famous for its “black” wine—AOC Cahors is made with at least 70% of malbec grapes, which give it the dark color of its nickname. (See this article: Red, White and Black.) It was much appreciated by Eleanor of Aquitaine and Peter the Great, and by the bishops of Cahors who resided in the Château de Mercuès, near Puy-l’Evêque, now an elegant hotel, restaurant and winery. Nestled beneath the château, Claude and Sabine Patrolin offer their hospitality and the products of their garden in their beautifully restored 18th-century residence, Le Mas Azémar, now a B&B. Jean-Luc Baldès’s grandfather René, from Le Clos Triguedina, helped to rescue the Cahors vineyards after the phylloxera calamity. The award-winning winery is a seven-generation affair, founded in 1830. Its flagship wine, Probus, a 100% malbec, honors the Roman emperor who encouraged the planting of vineyards in Gaul in the 3rd century.

The gastronomic stars of the Lot Valley are its black truffles. One devotee was the writer Colette, who came here on treasure hunts led by a sow, as was customary in her day, when every rural household kept pigs. Today dogs are trained to sniff out the precious fungi, since pigs try to eat what they uncover.

During the winter truffle season, don’t miss a meal at the Michelin one-star restaurant Le Gindreau, where truffles steal the show. The Tuesday afternoon truffle market (only in season) in Lalbenque is a strictly regulated affair; it demands know-how to participate, but it’s fascinating to watch. If you do buy a “diamant noir”, don’t wash it. Just scrape it clean as lovingly as did Colette. Le Gindreau, at Saint-Médard, is open all year, and chef Pascal Bardet– who worked under Alain Ducasse for 18 years– is a talented successor to Alexis Pelissou. The restaurant is in the former village school, its terrace beneath the chestnut trees of the schoolyard. The place, the succulent local products and the chef’s creativity make this a special stop on the gourmet pilgrim route. 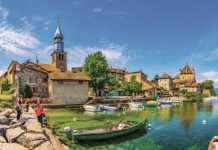