Anyone who has followed my writing about France knows that my favourite village in France is Essoyes, in the southern Champagne region, near the border of Burgundy.

But this article will focus on another very interesting small town that is not far from Essoyes, and is even closer to Burgundy.

Mussy-sur-Seine has a long and fascinating history. First a Gallo-Roman village, later a fortified medieval town, it has been a part of Champagne since the 10th century. The church in the town square, Collégiale Saint-Pierre-les-Liens, the façade of which has been recently cleaned and repaired, dates to the 13th century, and is a reminder that until the French Revolution Mussy was the summer home of the bishops of Langres.

More recently Mussy was, along with Grancey-sur-Ource, one of two centers for a unit of the FFI (the Free French Army, or the French Resistance) during the Second World War. By the summer of 1944 the Maquis Montcalm, as this unit was called, numbered 1200 members, 800 of whom had set up camp in the nearby forest. Unfortunately they were denounced, and on August 2-3, 1944 were forced out of their encampment by the Germans. Fortunately, most of the résistants escaped and were able to melt back into the population, and many of them went on to help the Allies liberate the area toward the end of the month; but a wave of brutal summary reprisals by the Germans left quite a few more dead before that happened. Today, a large monument to this maquis is situated in a clearing in the forest between Mussy and Grancey.

A small Museum of the Resistance in Mussy, which has been temporarily closed to allow a major renovation project to be completed, will reopen its doors in December 2019. Since 1999, every year on August 2 or 3 Guy Prunier, a retired sound engineer who has devoted his retirement years to researching and studying this Maquis, and sharing what he has learned with the public, has led a commemorative hike, each time choosing a slightly different trail to follow through the forest, explaining to the hikers the events that transpired on that August day in 1944 along the way. The 21st such hike will take place on August 3, 2019.

The history of Mussy is ancient, but it’s not over: as is true everywhere on earth, in Mussy history is continuing to be written in the present day. I interviewed Andy Feehan, an American artist who has been living in Mussy since 2005, for France Today a couple of years ago. Andy has a studio on the second floor of the 16th century building that was until recently the village’s elementary school, overlooking the church. Andy’s work is always interesting, but in the past couple of years he has embarked on a particularly interesting series of sculptural paintings inspired by local architecture.

“I had lived here for years, always aware of the numerous houses that were shuttered up and abandoned, but until 2016 I hadn’t considered making work about them,” he told me. “My attention shifted serendipitously one day when I really looked at the conditions of the doorways and windows of these old places. The Japanese have a word for the appearance of surfaces created naturally over time…wabi sabi. That’s not quite what this is, but the state of délabrement struck me like thunder and began to speak to me of history and human experience… families, births, deaths, and just the amount of work put into these places, now no longer cared for and essentially closed up forever. I’m particular about which houses I choose to paint…The places that capture my interest are somewhere in between charming and dilapidated. They are still alive, but their stories have become faint whispers, and you have to pay close attention to see and hear what they have to say.”

When I asked him what is most inspiring to him about working in Mussy, he said, “I’m not sure I can tell you in so many words. Mussy has had its ups and downs, and I think it’s going through some changes for the better. The single most inspiring thing for me personally is my studio. It’s in a building that is 500 years old and belongs to the village. I am a grateful tenant and temporary custodian.”

Since 2011, Jean-Paul and Beth Jacquet, who live in Connecticut, have offered summer art programmes in France through their l’Atelier au Chateau. Since 2013 their programs have been held, and they and their students have been housed, in the Chateau des Tertres in Mussy. “The chateau was built in 1868 and is considered Second Empire,” says Beth Jacquet.  “It is one of two chateaus within the town, which is somewhat unusual.”

I asked her why Mussy is special to them, and why it is a good place for art students to spend time drawing and painting. “We love the authenticity of Mussy-sur-Seine,” she said. “Part of our goal is to give our students a real cultural experience, rather than a touristy one. The people of the town have helped us feel like neighbors, not tourists. They are friendly and welcoming, and have allowed our students to mingle as well as to scout out spots from which to draw for great lengths of time. It’s in these spots that they capture on paper a true glimpse of rural France, with its unique pace, its light, its people, its culture, and the beautiful daily life that makes it different from their own.”

This being France, it would be remiss for me to fail to mention one other important fact about Mussy, which is that there are some very fine cheeses made at the Fromagerie de Mussy, which is actually in nearby Chaource. I love Chaource cheese, but I love the Mussy varieties they make there even more. There is also a Musée du Fromage in Chaource. (Visitors are advised to call ahead to confirm the hours and dates when the museum is open.) 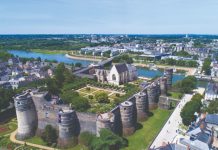