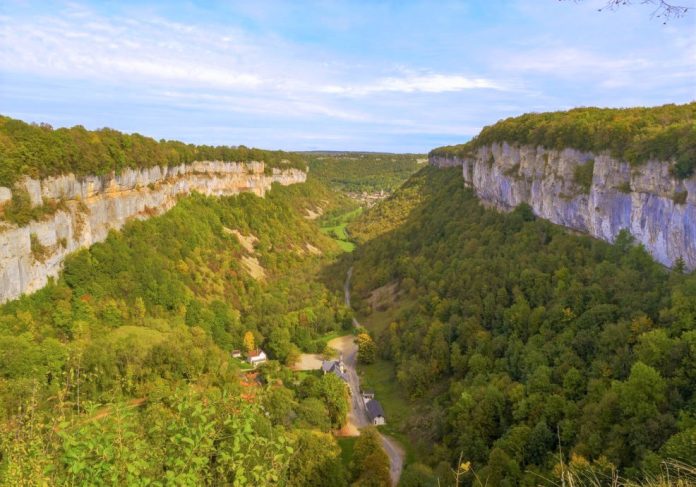 Don’t be fooled by appearances… despite the peacefulness, these mountains have an impetuous and unpredictable character: steep rocks, wild water features and steephead valleys… the Jura Mountains have many surprises in store!

Behind this geological fantasy (visible from the bridge that crosses the village of Pont de Poitte), witness the work of a river whose swirling and bubbling, combined with the friction of the pebbles, have created huge stone basins. These curious stone cavities, nicknamed ‘the Giants’ pots’, certainly fire the imagination. 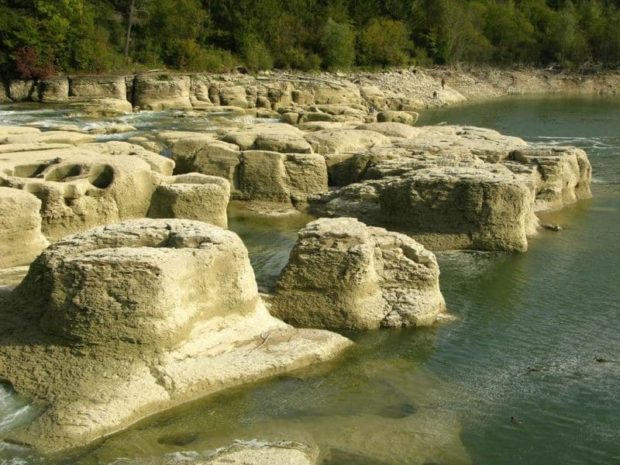 There’s no need to travel thousands of miles for a complete change of scenery – the tundra is on our doorstep, at least the Jura version of it. Welcome to the peat bogs of Frasne, a rare ecosystem whose landscapes are strangely reminiscent of the tundra.

Of course, these are not the vast expanses of Siberia or Alaska populated by reindeer and polar bears yet these landscapes do give a wonderful sense of ‘otherness’. Their fragile vegetation composed of mosses, heather, blueberries and even small carnivorous plants (la Drosera), can be explored via a wooden footbridge.

3. A ROCK FOLDED LIKE A SHEET: THE GENDARME’S HAT

How about this for a life-size geography lesson? Before your very eyes rises a huge limestone rock composed of different layers, like a millefeuille in stone. These different layers go back to the Jurassic, Cretaceous and Tertiary geological periods – some 20 million years ago, this mineral sandwich was somewhat shaken up by the formation of the Alps. By force of pressure, these malleable layers of the Jura wrinkled up to form what is known as an anticline.

More information on the site of the tourist office of Saint-Claude. 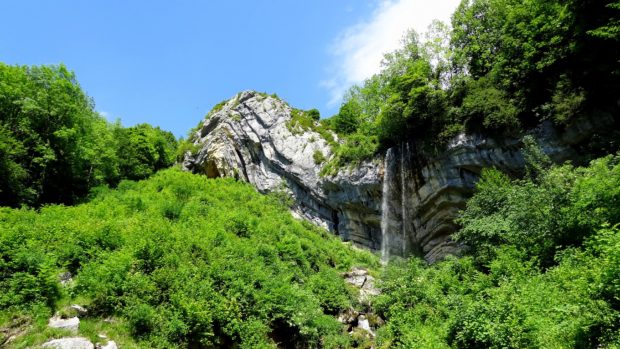 4. WHEN WATER PUTS ON A SHOW: LES PERTES DE L’AIN

It all began with the turmoil caused by the white waters of the River Ain, which sank into deep, narrow gorges. To enjoy this natural show up close and personal, take the path that follows the underground course of the river, then cross a small bridge. It starts off with bubbling, eddying water then the landscape opens onto a 17m waterfall that flows into a beautiful, peaceful basin populated by trout. Download the PDF of circuit N° 33 of the Tour des Pertes de l’Ain (5 km). More information on this tour from the Tourist Office of Jura-Monts-Rivières.

This is undoubtedly the most spectacular and well-known geological phenomenon of our beloved Jura Mountains. The result of a slow, complex coming together of water and limestone, we find steephead valleys (deep, narrow, flat bottomed valleys with an abrupt ending) in different parts of the Jura, the most vertiginous of which is that at Baume-les-Messieurs.

Imagine an arc of a circle formed by huge rock walls and, planted in the middle, a small picturesque village and its abbey. To avoid spoiling the view, Mother Nature has judiciously planned a waterfall and a cave at the bottom of the valley, making this an amusement park that’s mineral, underground, aquatic and 100% natural! Other steephead valleys in the Jura include Les Planches and Cerdon.

See Montagnes du Jura to get in contact or read more