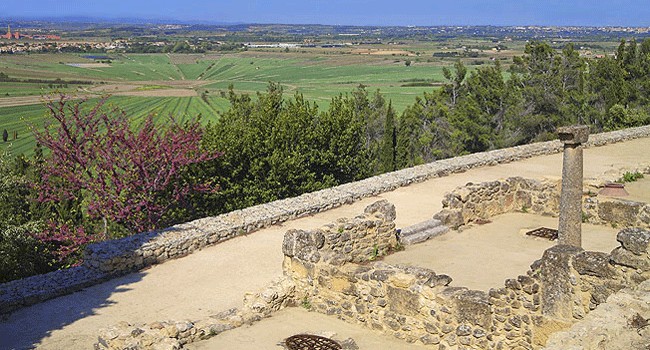 Standing at the top of the hill with the wind gently whipping through the tree branches, you can see an unusual sight in the distant valley. It looks like a gigantic crop circle. Radiating out from a central point and divided into narrow wedges, like the spokes of a wheel, the patches of fertile fields and small parcels of land create a mysterious multicolored patchwork pattern within the circle, extending more than one kilometre in width. In the 13th century, what was once a swamp had been drained by ditches that allowed the water to flow downward to the center of the circular depression where it was conveyed through underground pipes to the south.

Welcome to one of the most important Gaul-era villages in the South of France.

The dating of pottery shards found at the site confirmed that the oppidum, the Roman name for a fortified hilltop village, was occupied from the 6th century BC to the 1st century AD by the Gauls. With its hilltop views and proximity to the Roman road, or Via Domitia that led from Rome to Spain, the oppidum was a protected habitat until the Roman conquest, when safety was no longer an issue and settlers decided to relocate to the surrounding plains.

Located near the Canal du Midi between Narbonne and Béziers, L’oppidum d’Ensérune is on an isolated hill, its slopes covered with cypress and olive trees. Make your way up the gravel road to the top. Most of the structures have disappeared or are in ruin, but you can somewhat imagine the ancient scene. A slide-show at the museum offers a more complete glimpse back in time. Also on display is a collection of archaeological remains uncovered over time at this remarkable site.

For more information on L’oppidum d’Ensérune, visit enserune.monuments-nationaux.fr. The entry fee is 5,50 euros per adult.