Barges! Just the very name conjures up working vessels (called “peniches” in French) carrying coal, grain and other cargo from village to village and into Paris on France’s extensive canal system.  Built in the 16th, 17th and 18th century, the canals represented a time when roads were primitive and a good day’s travel was measured in the tens of miles. These historic waterways were largely abandoned in the late 18th century when railroads became the primary means of transport, and lay almost forgotten until the 1960s when they were “discovered” by young British travel entrepreneurs. Since that time, the concept of barging has changed from carrying freight to welcoming passengers from around the world on modern vessels that could be more appropriately named “canal yachts.” Gourmet cuisine, the tasting of local wines and cheeses, and exploring the chateaux, vineyards and markets are topped off by an intimate perspective of France that can be experienced only from her inland waterways.

Although the barges now carry passengers, much has remained the same on these living antique waterways. They are still bisected by locks (which raises or lowers the barges between the different levels of land), and many old locks are still attended by lock keepers; passing through them is part of the experience.  The speed of cruising is still SLOW – from five to ten miles a day (a perfect pace for those who want to bicycle or walk the towpath and jump back on the boat at the next lock) – and the villages look as they have for centuries, with cobblestoned streets and medieval buildings. Most importantly, the scenery remains unchanged, transporting barge passengers through fields of poppies and wheat, right through vineyards, and past locals strolling or fishing along the banks.

With all of the beautiful canals France has to offer – how do you chose which is right for you? Factoring in the number of barges plying the route, historical importance and points of interest, three waterways in particular stand out:

Canal de Bourgogne, which opened in 1832 to connect the rivers Saone and Yonne, is located in the renowned and accessible Burgundy region, with excellent train connections from Paris, Lyon and Lausanne, Switzerland.  Celebrated for its famed Cote D’Or vineyards and enchanting “wine towns,” many consider this the quintessential barge route. Elegant cities such as Dijon and Beaune offer architectural treasures which reflect the power and artistic ambitions of the Ducs of Burgundy, while the gourmet traditions of cheese, wine and mustard are still there for the tasting. Barges on the Canal de Bourgogne cruise deep into the Valley of the Ouche, with wooded hillsides rising in the background. About a dozen barges ply this canal, ranging in style from ‘floating country inns” decorated with local antiques to spacious, elegant vessels with the latest amenities. Burgundy is commonly called “The Land of Good Living” and is well suited to those drawn in by history, culture and sophistication.

Canal du Midi is a lengthy waterway in southwest France. Completed in 1694, this UNESCO World Heritage Site was built to connect the Atlantic Ocean and the Mediterranean Sea. Today our barges cruise only a small portion of the canal, one bounded by the medieval walled city of Carcassonne on the west and ancient Mediterranean port towns to the east. Lined with plane trees on some sections, and surrounded by small vineyards of the thriving, lesser known Languedoc-Roussillon wine region on others, it is so lovely that canal aficionados consider this the most beautiful waterway in France. Many important historical events played out along these shores. Narbonne was an outpost of the Roman Empire, where today our barge guests can view ruins of the Via Domita, the road that connected the territories to Rome. Barges on the Canal du Midi tend to be smaller (under 10 guests) and family-owned, with an informal and welcoming quality quite appropriate to the casual lifestyle and small villages found along its banks. The blending of history, culture and a Mediterranean pace of life set amidst a backdrop of breathtaking vistas make the perfect setting for a holiday in a region sometimes referred to as the ‘Real South of France.’

Completed in 1624, the Canal de Briare served as the water route transporting wine and other important cargo to Paris. A two-hour drive south from the City of Light, the Canal de Briare is a desirable barging destination, with such close proximity to Paris –  but in ambiance can feel centuries  back in time. The route combines gorgeous scenery with ancient towns now brimming with charming flower-laden bridges and small streets in which to shop and stroll. Our guests love to meet the locals along this canal, from a wine producer in Sancerre, a cobblestoned village perched high over the vineyards, to the countess in the garden of a chateau owned by her family for generations. Barges along this canal provide elegant accommodations and cuisine, as well as chauffeured transfers from Paris. A cruise along the Canal de Briare in France’s Upper Loire region is perfect for those who like to travel “off the beaten path.”

Guests enjoy six night cruises during the barging season if mid-April to the end of October.
For more information about barge cruises in France visit www.bargelady.com

Ellen Sack, The Barge Lady, has been a broker of French canal barge vacations since 1985.  She represents barges which range in size from 4 to 21 passengers. She has visited France at least fifty times, as if anyone NEEDED an excuse to travel to the top regions, cruise on untouched waterways, and enjoys the finest wines, cheeses and local sightseeing. Ellen has been named a Top Travel Specialist by Conde Nast Traveler magazine, making her one of the most elite travel providers in the world. 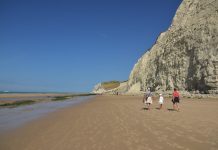