Home Culture Museums & Galleries A Party in Le Havre: A Summer of Celebrations

The excitement mounted as I joined the revellers on May 27, the date the party got underway. Hundreds of people dressed in over-the-top costumes inspired by themes linked to the city waited in anticipation in front of the Hôtel de Ville (Town Hall) for the opening parade to begin. Party-goers of all ages joined in the fun. Some wore colourful paper masks, others sang and waved flags as the procession started to wind its way through Le Havre’s sunny streets to the beach. That evening, there was after-dark merriment as thousands danced the night away at a pop concert overlooking the shimmering sea.

The city port of Le Havre was founded in 1517 by King Francis I, a contemporary of England’s King Henry VIII, and the anniversary is being celebrated with a six-month programme of events entitled Un Été au Havre. A keystone of the celebrations has been the creation of numerous fun artistic projects.

Le Havre has strong links to the sea. It serves cross-channel ferries, an increasing number of cruise ships and has a huge container port. One of the biggest art installations is the twin arches of brightly-painted shipping containers – not the most elegant of components, perhaps, but I liked the structure. Obviously so did the constant crowd of people who came for a closer look and to be photographed in front of it. The installation was built by Vincent Ganivet, who took inspiration from works by Antoni Gaudí. The multi-hued containers bring a splash of bright colour into what is primarily a city constructed of concrete, but more of that later.

Another imaginative use of containers is the creation of low-cost apartments for students. The attractive flats bear little resemblance to the industrial units from which they were made. There’s no doubt lots of creative thinking has been going on in this city.

On the beach, I came across the Porte Océane. Le Havre is indeed the gateway to the ocean and the white rectangular construction illustrates both a gateway and the design of the buildings that make up the modern city. The original plan was to put the installation on the roof of one of the buildings, but it is more visible and accessible here on the sands and attracts a stream of curious visitors.

Le Havre is also famed for its rows of beach huts which, along with their owners, have also joined the party. Traditionally they are painted white, but Dutch artist Karel Martens was given permission by the authorities to add various coloured stripes to most of them. University scientists used the 1517 decree which founded the city to generate codes which define the colour and width of each stripe. Resembling a huge, multi-coloured barcode, the end result is both striking and cheerful.

I headed for the nearby MuMa Museum to have a look at Clair-Obscur, an art exhibition featuring works by Pierre et Gilles, Pierre Commoy and Gilles Blanchard. They met forty years ago and have enjoyed both a romantic and artistic partnership ever since. Their style is unusual. Pierre is a photographer, and friends and family, as well as the famous and not so famous, have posed for him. Once printed onto canvas, Gilles, the painter in the partnership, applies paint to the images to produce unique works of art. The effect is realistic and dramatic. Pierre et Gilles also created a special installation combining their unique art with the beach huts. The couple were on hand at the opening to observe the visitors’ reactions to their unique art form and to sign autographs.

The railway station is part of the celebrations too. Julien Berthier has created a large mirror which sits on the roof of the main building. Called Altoviseur, it gives pedestrians a bird’s eye view of neighbouring streets. However, it is best viewed from the tram stop opposite the station, so do be careful when you’re crossing the road!

The Bassin Vauban, home to locally-owned yachts, hosts one of the more unusual items, the Love Boat. This shipwrecked yacht was donated by its former owner. The installation captures the moment before the boat sinks, bow first, stern rising from the water at 45 degrees. It is not to everyone’s taste but there’s no denying it is an unusual sight.

Of course, it’s not just about art installations. The compact Japanese Garden near the Love Boat brings an air of peace and tranquillity to the area. The fascinating Maison de l’Armateur (the ship owner’s house), is an 18th-century, four-storey house by the harbour, one of the few older buildings in the centre of the city. The interior is circular and rooms face an internal atrium that originally had no roof. Now open to the public, we were the first to have a tour in English. The building houses a fascinating collection of period items.

Whilst Le Havre was born 500 years ago, it suffered severe bomb damage during WWII and had a renaissance after the war. Architect Auguste Perret was commissioned to rebuild the city. Many locals wanted the city to be restored to its former state but, as he was starting with an almost blank canvas, Perret had other ideas.

Le Havre is very much Perret’s city, although he was 74 when he embarked on the project and did not live to see the completion of St Joseph’s Church, whose tower dominates the landscape and can be seen far out to sea. Indeed it has often been likened to a lighthouse. He was a specialist in the use of reinforced concrete and, in those pre-computerised days, it was decreed that pillars supporting buildings could not be more than 6.24 metres apart, giving the city an air of uniformity.

Although concrete is not the most glamorous of materials, Perret used different surfaces and colour tints to break up what could otherwise have been a monotonous, even depressing, appearance. The result is a well-planned city with streets in a grid format incorporating leisure spaces and parks. The old port, the Bassin du Commerce, is now a city-centre lake spanned by an elegant pedestrian suspension bridge, the award-winning Passerelle François le Chevalier, one of the city’s iconic landmarks. No wonder the city centre was recognised by UNESCO as a World Heritage Site. It is also easy for visitors to navigate and the welcoming beach, its lively bars, cafés and bustling promenade are never far away.

Perret was something of a revolutionary as I discovered during a visit of a show flat in one of his apartment blocks, complete with contemporaneous furniture. The clever use of the apartment’s space, which could be divided into closed rooms or opened up for more spacious accommodation, must have seemed very futuristic at the time. Although this new approach to living was not immediately welcomed by all, the apartments are now trendy and very popular.

His most striking structure is, however, St Joseph’s Church. The concrete edifice’s angular design sets it apart from other churches, giving it a somewhat industrial appearance. Inside, there is seating around the central altar and, unusually for a Roman Catholic church, there is no altar screen and little in the way of decoration, leaving exposed, bare concrete. This, combined with cinema-style tip-up seats, means that it is not to everyone’s taste. However, the church has also joined in the artistic celebrations with a huge red vertical net structure depicting a whirlwind, which attracts a steady stream of inquisitive visitors.

Le Havre is, of course, inextricably linked to the sea. A week after the launch party, Europe’s largest cruise line, MSC, christened its new cruise ship, Meraviglia, at the cruise terminal. The naming ceremony, performed by legendary actress Sophia Loren, was followed by a firework display that the whole city could enjoy.

It was one of a series of events taking place over the months of celebrations, which include a transatlantic crossing by Cunard’s Queen Mary II. Leaving, as usual from Southampton, she crosses to Le Havre to pick up an appropriate five hundred passengers before sailing to New York. In addition there are a series of beach concerts, a tall ships regatta and more art exhibitions.

Later in the year, yachts of various classes gather in the harbour for the Transat Jacques Vabre. This bi-annual event, which takes place on odd-numbered years, sees boats leave Le Havre on November 5. The race, to Salvador de Bahia in Brazil retraces the 4,300-mile route taken by clippers sent to bring coffee from Brazil to Le Havre. The gathering of competing yachts and their crew provides a great spectacle and generates much excitement on the shoreline.

Although Le Havre’s 500th anniversary celebrations are taking place over a period of six months, the spirit of joy and celebration will doubtless continue long after the last party balloon has flown away.

INFORMATION: For further information about the port city of Le Havre visit www.lehavretourisme.com and for Normandy in general visit www.normandy-tourism.org

HOW TO GET THERE: Brittany Ferries (www.brittanyferries.com, Tel. 0330 159 7000) offers up to two sailings a day from Portsmouth to Le Havre, with a journey time of 5 1/2 hours (daytime) and 8 hours (overnight). Return fares for a car plus two start from £200 in low season, £213 in mid-season and £293 in high season, including an en-suite cabin on the outward overnight sailing. Foot passenger returns start from £65 all year round.

AFerry.co.uk is The Travel Gateway’s leading online ferry brand, which features real-time comparison technology for ferries, generating over 55 million unique visitors per year and over 3,000 bookings per day. Founded in 1997, AFerry.co.uk has been an industry leader for nearly two decades and has strong relationships with ferry companies from across the globe.

Not only can AFerry.co.uk service all your UK ferry needs, but this handy site covers European, Asian and American routes too – over 2,000 routes around the world from over 150 ferry companies. With apps for iPhone and Android, and a website optimised for mobile, tablet and desktop devices you can compare and book ferries from wherever you are with ease.

For all your ferry requirements visit www.aferry.co.uk 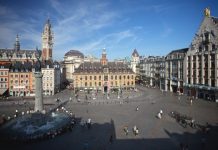