The fascinating history of the Dordogne from medieval to modern times is brought to life by the grandeur and mystique of some of its splendid châteaux. When you visit these medieval fortresses, Renaissance palaces and grand family estates you will encounter a rich tapestry, revealing accounts of love and war, ambition and tragedy, fairy-tale romance and escapism. Here is our selection – but many more fine examples await travellers looking for inspiring architecture and remarkable stories from days of yore.

This imposing fortified castle sitting on a dramatic cliff top location overlooking the River Dordogne has seen almost a thousand years of history played out against its stone walls and courtyards. It is one of the best-preserved in the region.

A beautiful 15th-century château near Bergerac, once neglected but now happily in private hands and undergoing a small renaissance. Many restored and furnished rooms to view as well as medieval-style games. Popular with families.

Near Monpazier, in the south of the Dordogne, this dramatic château from the 12th century is perched on a hillside overlooking the Périgord and Agenais countryside. Visitors will appreciate its many beautiful architectural features.

The site of one of the four baronnies of the Périgord, this is an impressive château with a spectacular tower overlooking the River Dronne in the north of the Dordogne near Brantôme. The château and surrounding village are worth a visit.

In the heart of the Périgord Noir this is a medieval fortress with a military history. In keeping with its past life, today it houses a museum of medieval warfare. Enactments of Cathar history take place on Monday, Tuesday and Wednesday evenings in summer.

Closer in appearance to a Loire château, the golden age of this majestic building in the north of the Dordogne was during the time of the Marquis de Hautefort in the 16th and 17th centuries. The beautiful formal gardens are a must-see.

The Château de Jumilhac is to be found in the north of the Dordogne, on the route of Richard the Lionheart. With its picturesque turreted Renaissance roofline this imposing château strikes visitors as the quintessential romantic castle.

In the Périgord Pourpre, this château dates from the Middle Ages but also boasts some fine work by Italian craftsmen who later helped transform some parts of it into a Renaissance palace. It has been owned by the same family since 1732.

A beautiful 15th-century castle in the heart of the Dordogne valley, made most famous by former owner the American chanteuse Josephine Baker, who lived here with her 12 adopted children. Famed for its birds of prey displays during the summer.

Here, just south of Bergerac on a proud hilltop, you can combine a pleasant dégustation of the famous dessert wines with a visit to the small yet impressive château with Renaissance interiors and views over the vineyards.

A Renaissance jewel in the north of the region, Puyguilhem is an elegant building with classic proportions and Loire-esque turreted rooflines. Hard to believe it was once abandoned until the French state intervened in the 20th century.

Only opened to the public in 2013, this is a Louis XIII château overlooking the River Vézère not far from the Lascaux caves. The owner will often be on hand to share his special interest in prehistoric artefacts.

Want to visit The Dordogne? Join France Today on one of our luxury tours of Delightful Dordogne 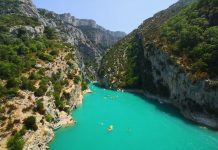