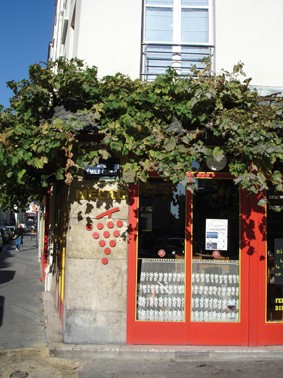 Tourists can be a tiresome lot. And France’s beautiful capital city has more than its fair share. But with a little investigation there are some sights that are neither inundated with sightseers nor listed in the guidebooks. So if you’re sick of having to weave round cameras and you feel deafened by the blare of shouty types, then read this guide to the top 10 Parisian hidden gems. Just don’t tell anyone else!

There are few places in Paris more creepy than this bizarre old taxidermist’s shop just off Boulevard St-Germain. You first realise something’s not quite right at Deyrolle, on Rue du Bac, when you spot the clothes mannequins in the window display with their stuffed gazelle heads. But then, as you tread cautiously up the stairs, the full extent of this menagerie of the dead suddenly hits you: lion, tiger, polar bear, brown bear, moose, ostrich, horse, zebra, cow… you name it, Deyrolle has shot it, stuffed it and displayed it for all to see. In one corner there’s even a charging elephant. And if that doesn’t keep you amused (or offend your environmental sensibilities) then you can always peruse the hundreds of zoological and anatomical posters stacked up in the adjoining rooms. Deyrolle, Rue du Bac 46, 75007 Paris; Tel: 00 33 1 42 22 30 07; Open 10am to 7pm Monday to Saturday; Metro: Rue du Bac

For the last 150 years bees have been pollinating, making honey and generally buzzing around the southwest corner of the Jardins de Luxembourg in Paris’s fifth arrondissement. In all that time their apiary home, Le Rucher École du Luxembourg, has remained pretty much unchanged. Built in 1856 by Henri Hamet, it is now home to 20 colonies of bees whose honey is sold in the Luxembourg Gardens orangerie. Apparently urban honey can be just as tasty as its rural equivalent. Le Rucher École du Luxembourg, southwest corner of Les Jardins de Luxembourg, 75005 Paris; Metro: Vavin or Notre-Dame des-Champs

Every year Jacques Melac gleans just enough grapes from the vines growing on his Parisian bistro to make around 35 bottles of wine. In mid-September, exactly as they always have done since the 1970s, locals join together in one huge street party to help Jacques prepare his produce. Children climb ladders to pick the grapes before everyone pitches in and tramples them in huge vats. The result, while not exactly vintage, is called Château Charonne, named after the nearby Rue de Charonne. “Every wine reflects the image and the personality of its producer,” says Jacques from behind his trademark handlebar moustache. That’s certainly true of his Château Charonne, which is just one of the many distinctive wines served at this very distinctive bar. Bistrot Mélac, 42 Rue Léon Frot, 75011 Paris; ?Tel: 00 33 1 43 70 59 27; www.melac.fr; Shut on Sundays and Mondays in August; Metro: Charonne

When it comes to ablutions, the French are hardly the most particular lot. Until recently, in many bars and restaurants customers looking for the powder room were required to squat ignominiously over a hole in the ground. So when you descend into the public toilet beneath Place de la Madeleine you may think you’re dreaming. Decorated from wall to ceiling with beautiful wood panels, art nouveau brass and mirrors, floral frescoes and stained glass, this WC is unlike any other. Each cubicle even comes with its own washbasin. The attendant working there wasn’t as impressed, however. “It’s just a s***house,” she said when reminded it was the most beautiful public lavatory in Paris. Public convenience, underneath Place de la Madeleine, 75008 Paris; Open 10am to 12am and 1pm to 6.15pm; Metro: Madeleine

There are thousands of statues dotted across France’s capital city, but one which really jumps out at you, quite literally, is a 1980s work by Jean Marais called Le Passe-Muraille, in Montmartre. Dedicated to the writer Marcel Aymé, and based on his 1943 short story Le Passe-Muraille (The Walker Through Walls), it shows a man’s head, torso and three of his limbs emerging from a solid brick wall. All very weird and very original. Le Passe-Muraille, Place Marcel-Aymé, on the junction of Rue Girardon and Rue Norvins; Metro: Lamarck Caulaincourt ?or Abbesses

Everyone knows about Molière’s last resting place in the Père Lachaise Cemetery. Oscar Wilde’s is very popular too, as is Edith Piaf’s. And at Jim Morrison’s grave you can’t move for flowers, song lyrics and mourning fans of 1960s rock band The Doors. But one tomb in this beautiful cemetery in eastern Paris which you really shouldn’t miss is that of a 19th-century journalist called Victor Noir. Killed in an argument by a relative of Napoleon Bonaparte in 1870, Noir was so popular that a life-size bronze statue was sculpted to mark his grave. It depicts the man moments after his death, lying prostrate on the ground, his hat dropped by his side and the bullet wound visible in his chest. But what the sculptor Jules Dalou didn’t realise was just how popular his work would prove to be with Paris’ female population. It turns out that Noir was something of a playboy and myth has it that if women rub his groinand place flowers in his hat they will find love and/or fertility. Parisiennes are obviously a superstitious lot since the business area of his trousers is much shinier than the rest of the statue. In fact, the cemetery authorities were so worried about all the attention Noir was getting that in 2005 they decided to fence off the statue. But there was such a public outcry from the city’s love-lorn female population that the fence was quickly removed. The grave of Victor Noir, in the northeast section of Cimetière du Père Lachaise, 75020 Paris (nearest entrance Porte de la Réunion); Tel: 00 33 1 55 25 82 10; www.pere-lachaise.com; Open from 9am to 5.30pm; Metro: Gambetta

The springs of the Alps and the Pyrénées are all very well, but how are you supposed to sup from mountain streams if you live in inner city Paris? Locals in the 16th arrondissement have got round that problem by drawing water from their very own well, deep below the Square Lamartine. Available free to the public, the Passy Artesian Well has been providing pristine water since it was first dug to beat the cholera epidemics in 1855. On our visit an old man was at the marble basin filling up a dozen or so plastic bottles. Asked if he thought (as many do) that the waters have healing properties, he said: “I don’t really care. But it’s certainly a lot cheaper than Evian.” Puits Artésien de Passy, Square Lamartine, ?75016 Paris; Metro: Pompe

The angel who survived the atomic bomb

You’d be hard pushed to find anything good that came out of the atomic bombing of Hiroshima and Nagasaki, and the killing of over 200,000 people at the end of the Second World War. But there was perhaps one tiny ray of hope amongst all this madness. When survivors were hunting through the devastated remains of a Catholic church in Nagasaki, among the pulverised rubble they found part of a beautifully sculpted angel. Her body had perished, but her face and wings were almost intact. The Angel of Nagasaki, as she became known, was transferred to Paris and now resides in the peaceful Japanese garden at the United Nations’ UNESCO headquarters in the 7th arrondissement.The Angel of Nagasaki, UNESCO, ?7 Place de Fontenoy, 75007 Paris; Tel: 00 33 1 45 68 16 42; www.unesco.org/visit/jardin/; Open on Tuesdays and Wednesdays from 3pm; Metro: Cambronne or ?École Militaire

Built in 1407, the Maison du Haut-Pignon is apparently the oldest house in the whole of Paris. But what’s even more surprising is that the original owner, Nicolas Flamel (as featured in Harry Potter and the Philosopher’s Stone), was an alchemist who claims to have regularly turned lead into gold. Nowadays the house is home to a great restaurant called L’Auberge de Nicolas Flamel. La Maison du Haut-Pignon, L’Auberge de Nicolas Flamel, 51 Rue de Montmorency, 75003 Paris Tel: 00 33 1 42 71 77 78; Email: [email protected]; Open 12 to 2.30pm; 8 to 10.30pm; Metro: Rambuteau or Étienne, Marcel or Arts et Métiers

You may well know about the quarter-sized Statue of Liberty on the River Seine. But for a truly diminutive Liberty you need to hunt among the foliage of the Jardins de Luxembourg. On the western edge of the park, on a rather nondescript and shady stretch of lawn, you’ll find a 10-foot-high statue entitled Liberty Lighting Up The World. One 16th the size of her big sister in New York City, she is one of two prototypes created by Auguste Bartholdi as a forerunner to his world-famous landmark. The other prototype is in the Musée des Arts et Métiers in the third arrondissement. La Liberté Éclairant Le Monde, western edge ?of Les Jardins de Luxembourg, 75005 Paris Metro: St-Placide or Rennes

[Note from the editor: a reader has kindly alerted us to the fact that the WC Place de la Madeleine have been temporarily closed. At the time of this writing there is no definite date for reopening.]