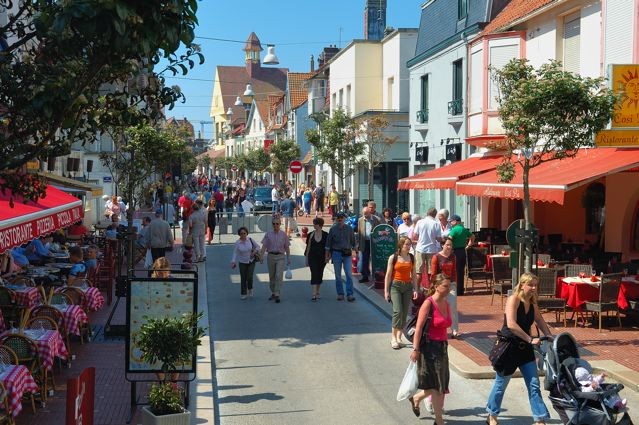 For me, it’s not just a beautiful view but a nearly perfect axis of happiness. Standing in the immaculately groomed Jardin d’Ypres, I look across the rolling green lawn that runs past the charming public library at the Hôtel de Ville and then, from afar, through the central arch of the horseshoe-shaped marché couvert, one of the best markets in France, to a window of opalescent infinity at the end of the rue Jean Monnet where the sea meets the sky.

In other words, in Le Touquet all of my pleasures are lined up in row—good books, great food and the sea, although I’d also add that the village’s tidy streets lined with architecturally fanciful villas and polite and very friendly people are a regular delight, too, as are the stylish shops and restaurants and the miles of walking and cycling trails in the beautiful forest just on the edge of town.

I first visited what I’d say is one of the best seaside resorts in Europe 20 years ago, and happily almost nothing has changed since then. Two hours north of Paris on the Atlantic’s Côte Opale, it remains a well-mannered resort with a strong regional character that’s blessedly preserved the genteel atmosphere of its Edwardian heyday. In fact, every time I cross the 1930s-vintage Pont Rose, a dark pink sandstone bridge over the Canche River linking Etaples to Le Touquet, and get my first good gulp of the wind-scrubbed salt-rimmed air, the world instantly seems a much better place.

On a warm Friday in June 1988, a new friend called and suggested we go away for the weekend. I was afraid she’d suggest somewhere on the Med, which would mean a very long train trip, or Deauville—much closer to Paris and pretty enough, but I find it too “bling-bling”, maybe because my ideas of a perfect seaside destination were formed by the wonderfully plain, old-fashioned places where I summered as a child: Nantucket, Quogue, and Narragansett. Instead she suggested Le Touquet Paris-Plage. “I used to go there as a child,” she added, almost thinking my thoughts. “My grandmother had a villa there. I think you’ll like it. It’s very pre-war—simple and old-fashioned. You don’t need a car there either.” So we took the train north, and by the end of two days, I was smitten.

To understand why, all you have to do is walk down the rue Saint Jean, Le Touquet’s main shopping street. Here, the irresistible sweetness of this unselfconsciously wholesome seaside resort is summed up by what’s for sale in the shops—sharp-tipped red-painted beach spades with sturdy wooden handles, shrimping nets, striped sailor shirts, jars of some of the best fish soup in France, and, in a men’s haberdashery, a pair of socks embroidered CH’TI. At the end of the street, across the broad Boulevard de la Plage, is Le Touquet’s raison d’être, the sea, near or far depending on the very dramatic tides, but usually reached across a broad flat sandy beach that’s lined with cement bathing cabanas with doors painted in a cheerful rainbow of colors.

Though many Brits and Belgians join in, Le Touquet remains the rather confidential paradise of the Ch’ti bourgeoisie—Ch’ti being the old traditional dialect of northern France, and Ch’tis the people who speak it. “We all love Le Touquet,” says my friend Carole Thiry, a native of Valenciennes. “For us it’s a sweet family place that never changes. It’s very B.C.B.G. (bon chic, bon genre, or Franco-preppy), which is why every notaire from Amiens, docteur from Lille, and avocat from Béthune comes here in the summer. Many families have been summering in Le Touquet for generations.”

Le Touquet also has one of my favorite French hotels, the Westminster, a handsome brick mansion with bow windows, gables and a red-tiled roof located right at the entrance to town on the Avenue du Verger. There are lots of reasons I like the place—it’s truly French (the bathroom taps are still marked C (chaude, hot) and F (froide, cold); I’m bemused by the way it exhibits the anglophilia of the northern French bourgeoisie, right down to the excellent selection of single-malt Scotch in the bar; its unselfconscious aura of Belle Epoque gentility; but most of all I appreciate the fact that it’s a comfortable, well-run, old-fashioned hotel that I can actually afford. Breakfast in your room doesn’t cost an arm and a leg, and the pastry basket includes several tartes à sucre, a northern French confection that’s a sugary cross between a brioche and a donut. To be taken for a regular here, by the way, be sure to close the heavy wrought-iron doors of the two vintage elevator cages behind you, or the elevator won’t move.

Le Touquet may be a perfect place to do just about nothing, but it’s also a golfers’ paradise (there’s a gorgeous 18-hole course on the edge of town) and sportier types get around town on rented bicycles. It’s also a terrific little food town. Stop by Le Chat Bleu, the best chocolatier—founded in 1912 and named after the Persian cats of the sisters who launched it—for a nibble, maybe a caramelo, which is a dark chocolate cup filled with salted caramel, or slices of ginger dipped in black chocolate. Or treat yourself to an ice cream cone from one of the many stands that stock the delicious Dagniaux ice cream made in Lille.

On a recent Indian summer Sunday, the whole town seemed to be having lunch at Pérard, Le Touquet’s most famous fish house, renowned for its fish soup and lobster bisque. Couple after couple alighted at the single table for two to the left of the front door, only to be told that it’s “réservée à l’année” (booked all year). Needless to say this made me eager to catch a glimpse of these privileged gourmands, who turned out to be a rosy-cheeked old lady with her oyster-loving daughter—together they ate two dozen oysters, before tackling big lobsters. To my right, a stout lady with an impeccable chignon in a white-polka-dotted lime green dress and a large alligator pocketbook dined with her bird-like bachelor son, while a bourgeois couple next to them, both wearing V-necked mocha-colored cashmere sweaters and blue chambray shirts, daintily consumed a massive plateau de fruits de mer, overflowing with fresh shellfish and crustaceans. I also made what could be a valuable professional contact during my meal, since the cheerful electrician from Amiens dining with his jewelry-loving wife at a nearby table gave me his card and promised he’d come to Paris if I needed him. Distressed fuse boxes were happily a long way from my thoughts as I scarfed down a plate of house-smoked salmon and a perfectly grilled sole with a half bottle of William Fèvre Chablis.

After this ideal lunch, I wanted a stroll, so I had choices to make. I could head down to the beach, or I could wander through the streets of the village and enjoy the fanciful 1900-1939 resort architecture variously inspired by the flamboyant Gothic style of northern France, Tudor England and medieval Normandy, with the occasionally wonderful eccentric feint at Art Nouveau or Art Deco, or I could choose shade and walk in the woods.

Since I find the cusp of autumn delicious, I opted for the woods, which had a rich ripe-apple smell of leaf meal with notes of pine and iodine, and are the heart of the resort. Well-established today, this forest was planted in what were originally sand dunes in 1855 by Jean Baptiste Alphonse Daloz, laying the groundwork for Le Touquet (the name is derived from Picard patois for le tournant, the turning). The original hamlet completely changed starting in 1874 when the owner of Le Figaro, Hippolyte de Villemessant persuaded Daloz to turn it into “Paris Plage,” or the beach of Paris. Later, Daloz’s heirs worked with English investors John Whitley and Allen Stoneham, who created a luxurious new beach resort, and by 1927, Le Touquet had become one of the most stylish watering holes in Europe, with France’s busiest casino to boot. Princes and maharajahs filled the town’s hotels and sumptuous villas were built on the quiet lanes traced in the by-then mature forest.

Le Touquet was slow in recovering from World War II, since the Germans planted some 130,000 mines along its long flat beaches, mistakenly believing they’d be the inevitable route of any possible Allied liberation. The snug little resort—you can walk it east to west in forty minutes—boomed during les trente glorieuses, the thirty prosperous post-war years, however, which also had the unfortunate impact of lining its seafront with high-rise apartment buildings. Unlike many other French resorts, however, this building boom didn’t devour the rest of the town, so that the idiom of Le Touquet today remains its tight village of privately owned villas and houses.

Walking in the forest, the weather went into sudden convulsions—it often does along the English Channel—but I was happy to wait out a brief shower under a huge oak tree, and an hour later the sun had returned and the woods were alive with bird song.

While many French seaside resorts wishfully style themselves as four-season destinations, I can honestly vouch for the fact that Le Touquet is just as appealing in November—or even February for that matter—as it is in July. Last Thanksgiving, for example, found me snuggled up in an attic room at the Westminster with a good book, a feast of reading broken only by the occasional bracing walk on the beach. And with no slight intended to our Pilgrim Fathers, I was happy as a clam tucking into a huge grilled lobster for dinner instead of a turkey. The friendly waiter who served us that night wouldn’t let the holiday go unobserved, however. At the end of the meal, he offered us each a glass of Champagne, “in honor of your fête nationale“. It was a very thoughtful gesture, bien sûr, but not really necessary, since I was already quite thankful to find myself in Le Touquet.

Originally published in the October 2008 issue of France Today; updated in May 2012

Take a Wellness Retreat in the French Countryside at the Happy...