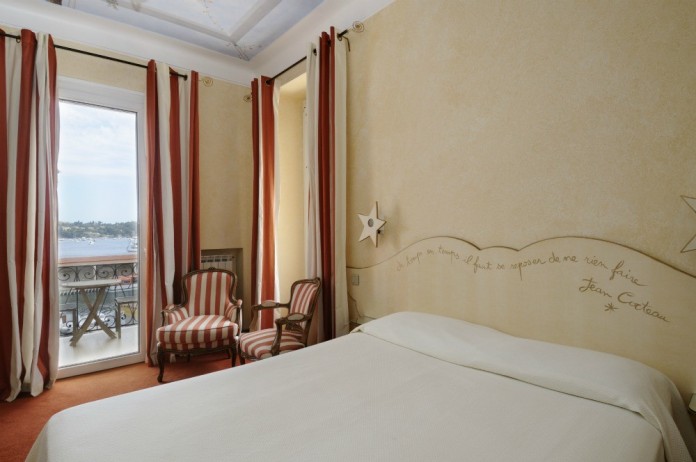 When poet-painter-playwright-film director Jean Cocteau arrived in Villefranche-sur-Mer in the 1920s, he was so enchanted by the fairy-tale aura of this tiny Riviera fishing village near Nice that he decided to stay. He checked into the waterfront Hôtel Welcome, a former 18th-century convent with a faded ocher Italianate facade and small terraces just above the cobblestone quay. Cocteau chose the corner room overlooking the harbor for its front-row perspective on the local scene: “No Italian comic opera set could more fittingly haunt the waking sleep of poets than this theater of illusions, for which the little town of Villefranche serves as the backstage,” he wrote.

The 220-year-old hotel, known as the Hôtel de l’Univers in the Victorian era, has been considerably spruced up since Cocteau’s time when, it’s said, the hallways reeked of opium and nightly brawls broke out between sailors and streetwalkers. A more recent, simple and elegant refurbishment really works, with artsy painted wall frescoes and a variety of decorative themes for the 35 comfortable, uncluttered rooms—including the Cocteau room, now number 22.

Owned and run by the Galbois family since 1943, the rooms all have views of the shimmering sea and wooden pointus fishing boats hauling the catch of the day into the little harbor. “We want to keep the friendly spirit of a pension, even if we now offer all the services and amenities of a four-star hotel,” says Gérard Galbois.

Sitting in the contemporary-style glass-enclosed bar, it’s clear why it’s one of the late-night hot spots all year round. “One of my best memories was the night Liz Taylor and Richard Burton sat right here at the bar drinking Dom Perignon,” says Galbois. “They were hiding out from the Cannes Festival crowds, and no one could find them here.” Other illustrious guests over the years included Isadora Duncan, Kiki de Montparnasse, Man Ray, Igor Stravinsky, Errol Flynn, Evelyn Waugh, Winston Churchill and Somerset Maugham.

These days, the most sought-after rooms are the Cabine Bateau suite, decked out with a cheery nautical decor, and the airy, white-on-white Suite Voyage.

Guests all have a terrific view of the 14th-century, rose-and-lemon-cream Chapelle Saint Pierre, painted by Cocteau some 30 years after he first holed up at the Welcome. The interior depicts almost hallucinatory scenes from St. Peter’s life, entwined in a fantasy of local characters.

Perhaps the best news about the town of Villefranche—a cluster of narrow, vaulted medieval streets and ocher, pink and yellow houses with orange-tiled roofs—is that it has maintained an authentic, glitz-free charm. Cocteau’s spirit still haunts the Riviera too, not only in the chapel here but also down the coast in Menton. The wedding room in the City Hall that he painted and the small Cocteau museum on the port has been  joined by a new ultra-contemporary multimedia Jean Cocteau museum near the Old Town market, housing an immense collection of his works donated by watchmaker Severin Wunderman. The new museum opens November 6.

Originally published in the October 2011 issue of France Today; updated in September 2012