Home Travel My Life in Paris: Queen for a Day 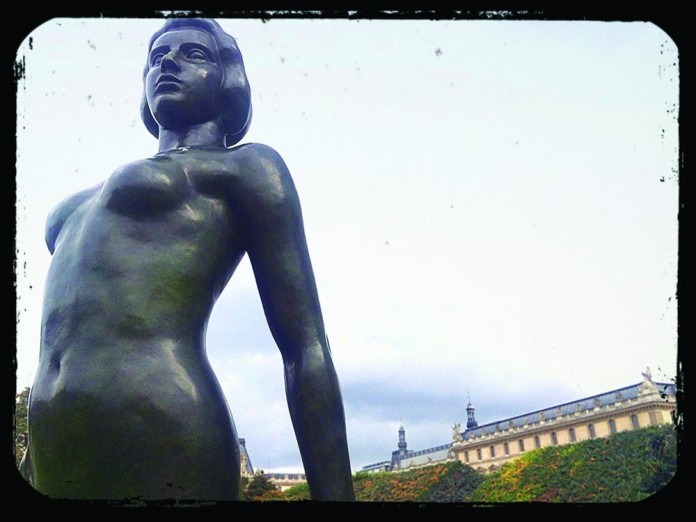 Preparing to make the leap into the New Year, I recently trekked to the Pont Neuf for a tête-à-tête with my favourite visionary planner, King Henri IV. Cutting a dashing figure in bronze from atop his steed in the centre of the bridge, the ‘Vert-Galant’ and King of the original urban re-do has never failed to woo or motivate me…

The nook-like bastions and pedestrian sidewalks of Henri’s ‘New Bridge’, which is now the oldest standing traverse in Paris, were new-fangled back in their day. It was also the first bridge in the city to be built without houses or shops (ie. firetraps) lining its span. During the Pont Neuf’s construction, it became popular for daredevils to jump from pier to pier.

Not to be outdone by his subjects, the larger-than-life Henri decided to make the leap himself, after hearing about the craze. When someone pointed out that more than a few others had fallen and drowned, Henri is said to have quipped, “This may be so, but none of them were  kings.” O, Henri! Even more impressive is that after his successful leap he made it back to the nearby Louvre in  time for dinner, deftly balancing home with the workplace. As Henri liked to say, “Great cooking and great wines make a paradise on earth!” Perhaps it is possible to have it all?

Inspired by the drama king, I vow to add a smidgen of extravagance to my own New Year celebratory agenda. Perhaps it’s time to crank up my very own dewy pomp and circumstance, and raise the beauty bar. And whenever I get in that mood, I often decide it’s time for a facial.

“Why not?” my pal Édith says, giving me the name of her favourite beauty institute, a famous perfumery on Place Saint-Sulpice. “Transformation reigns here,” she adds, handing me their Le Boudoir brochure.

Said pamphlet lists facials and massages named after the likes of Madame de Pompadour, Marie Antoinette, Joséphine, and Gabrielle d’Estrées, the latter a favourite  mistress of Henry IV. What to do? Go with the ‘Diane de Poitiers’ (Henri II’s favourite, famed for quaffing liquid gold), or the ‘Aliénor d’Aquitaine’ (the “beyond beautiful” wife of Louis VII)?

The mind squeals. How to choose?

Then I spy one of the most expensive treatments, the ‘Médicis’. I am not surprised. We have fashion maven Catherine de’ Médici to thank for the Jardin des Tuileries, macarons and high heel sandals with a neo-classical twist. What’s more, she had beauty secrets of her own, and shared them with her daughter, Marguerite de Valois, and the whole courtside ‘flying squadron’ of ladies-in-waiting.

One such secret included taking a linen cloth and dipping it in sour milk, then adding slices of lemon and orange, a dash of sugar and a dab of alum. Crushed snails completed the formula.

Tempting as this may sound, I decided to play it safe. After all, her highness was known to send poisoned gloves and toxic fruit baskets as gifts to her enemies. I’ll instead splurge with the salon’s own head-to-toe ‘Médicis’ massage. Yes, it was wickedly expensive, but worth every scent. As Catherine herself used to say, “We all have sins to confess!”

With the nearby Saint-Sulpice church bells ringing, I leaned back on the pink satin divan while the massage therapist worked her magic on my visage and corps with rose- and peach-scented scrubs, creams, oils, and mists.

Hours later, I once more felt like exclaiming, “Je me porte comme le Pont Neuf!” Like the old Parisian saying, “I feel as sound as the Pont Neuf!”

In 2003, Theadora Brack moved to Montmartre to write for the travel site Eurocheapo.com. She runs her own blog, a field guide to Paris: www.peopleplacesandbling.com