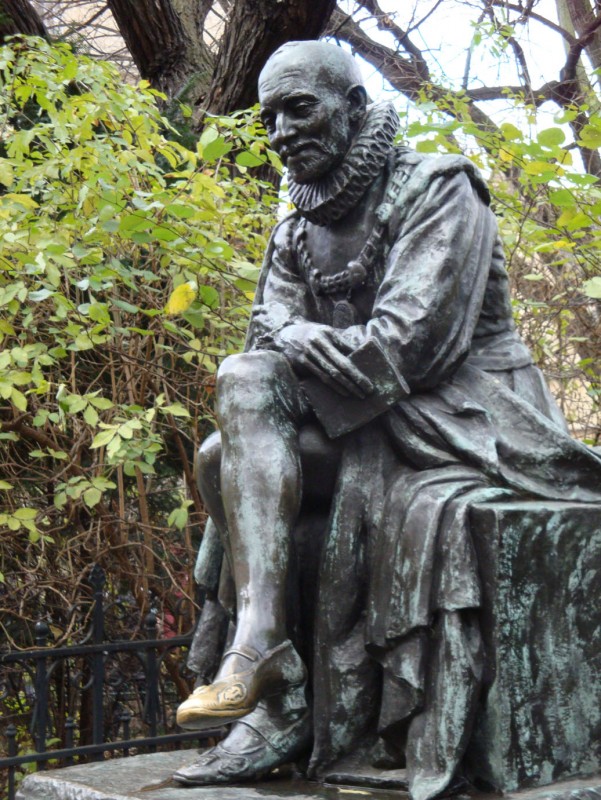 There is something reassuring about the 5th arrondissement. Although it has lost much of its student life in recent decades, somehow its deeper core has remained pretty much unchanged. Its northwestern fringe has been overtaken by mass tourism, but a short walk away the perennial Latin Quarter still echoes with the chimes of the Sorbonne’s chapel bell, and on the corner of Boulevard Saint Michel and the Place de la Sorbonne the statue of 19th-century philosopher and early sociologist Auguste Comte reminds passersby that this is a stronghold of the thinking world.

Around the corner, on rue des Ecoles, a bronze statue of humanist philosopher Michel de Montaigne in Renaissance garb provides a similar marker—the toe of his bronze shoe rubbed to a gold patina by students hoping for luck in their exams. The prestigious Ecole Normale Supérieure—Normale Sup’—where Jean-Paul Sartre and Bernard-Henri Lévy studied, is only a only a toss of the philosopher’s stone away from the Collège de France with its alumni list of eminent scholars, including philosophers Henri Bergson and Michel Foucault, historian Fernand Braudel, Egyptologist Jean-François Champollion and anthropologist Claude Lévi-Strauss. All of them lend support to the old saying, La rive gauche pense, la rive droite dépense (the Left Bank thinks, the Right Bank spends). It might as soon be applied to the Latin Quarter versus now lavish Saint Germain des Prés, in the adjacent 6th arrondissement, with which it is often confused.

Unlike Saint Germain, the 5th arrondissement has little to offer the shopping addict. It boasts no designer shops but an impressive number of classic repertory cinemas and quite a few unpretentious, affordable bistrots, along with the glamorous restaurant La Tour d’Argent and its bird’s-eye view of Notre Dame. Although property here is not quite as expensive as in the 6th, it is harder to come by, because its solid residents have no desire to move elsewhere.

To delve into the neighborhood atmosphere, start on a market morning at the Place Maubert—Tuesday, Thursday or Saturday. The colorful scene and mouthwatering produce are hardly evocative of centuries past, when this area was branded the “cesspool” of the city’s lower depths. The first student barricades were set up here too, in 1588—student protest has a long history in the 5th.

Leading toward the Seine, the rue de Bièvre was paved over the site of a canal diverted from the Bièvre River, a tributary of the Seine. Over time it degenerated into a sewer—”the latrines of the university”. Today it’s lined by several 18th-century townhouses, including the former private residence of the late President François Mitterrand, adjoining a lovely pocket-sized garden. Mitterrand continued to use his Bièvre home even while he was the resident of the Elysée Palace, and he played host here, in his library-office under the roof, to such guests as Helmut Kohl and Mikhaïl Gorbachev.

To the west, the rue du Fouarre was the first, open-air site of the University of Paris, in the early 13th century. The street was named after the fodder (fouarre in old French) the students brought along to sit on, while their illustrious masters—notably Thomas Aquinas—delivered their lectures from trestle tables. The rue du Fouarre became synonymous with the University of Paris, and was still referred to as such by Rabelais three centuries later.

Long ago the church of Saint Julien le Pauvre, on the corner of Square René Viviani, served as the university’s administrative seat. Completed in 1240, Saint Julien was a prestigious church, where over the centuries Dante, Petrarch, François Villon and Rabelais came to pray. It is guarded by one of the city’s two oldest trees, imported—possibly from Virginia—in 1601. The church was named for Saint Julien, who is said to have killed his parents inadvertently, after which he vowed to devote his life to the poor. A 14th-century stone carving, the city’s oldest street sign, now affixed to a nearby movie theater at 42 rue Galande, depicts Julien and his wife helping a pauper—Christ in disguise—across the Seine.

On rue de la Bûcherie, the Shakespeare & Company English bookshop, named in honor of Sylvia Beach’s legendary 1920s establishment of the same name on rue de l’Odéon, was founded by the now-retired, 91-year-old American George Whitman, who himself has become something of a legend. Chock-a-block with both new and secondhand books, the shop holds regular authors’ readings and book signing events, and occasionally serves as a crash pad for backpackers.

Rue de la Huchette is home to the Caveau de la Huchette, a jazz mecca of the 1940s and 1950s, still swinging nightly to be-bop rhythms. At the Théâtre de la Huchette, Eugene Ionesco’s play The Bald Soprano has been running nightly since 1957, a Paris record. The area around rue de la Harpe, once a much longer artery, was a Jewish enclave in the 12th century, its name referring to King David’s harp. The church of Saint Séverin offers a rare example of flamboyant 15th-century Gothic architecture, although some sections date further back, to the 13th century.

Across the Boulevard Saint Germain, the rue du Sommerard was the first site of the Sorbonne when it was founded, in 1254, by Robert from the village of Sorbon, in the Ardennes. Despite his humble origins, Robert de Sorbon became an eminent theologian and chaplain to King Louis IX—Saint Louis. Later the Sorbonne became one of the many colleges that make up the University of Paris, but its scholastic achievements and its reputation were such that it was, and still is, often mistaken for the entire university. The premises were rebuilt by Cardinal Richelieu in the 17th century, and his marble tomb is housed in the chapel, surmounted by Girardon’s funeral sculpture. Richelieu’s image was given rough treatment during the French Revolution, and its nose was broken, but it was later glued back into place. The Sorbonne is open to the public on guided tours only.

At the corner of boulevards Saint Germain and Saint Michel, sitting beside and above the imposing ruins of ancient Roman baths, the Hôtel de Cluny was completed in 1480, and it remains a rare survivor of the Paris portrayed in Victor Hugo’s Hunchback of Notre Dame. The beautiful Gothic mansion—one of only two such 15th-century private mansions to survive in the city—was the Paris pied-à-terre of the famous Cluny abbey in Burgundy. It now houses the Museum of the Middle Ages, which offers a very rich collection of medieval art and artifacts but is best known for the Lady and the Unicorn tapestries, a spectacular set of six late 15th- or early 16th-century panels which were discovered in the Château de Boussac, in the Auvergne, by 19th-century author Prosper Mérimée and brought to the world’s attention by writer George Sand.

To the north, the Boulevard Saint Michel leads up to the river and the Place Saint Michel, famous for its monumental fountain with a statue of the saint slaying the devil, flanked by winged dragons—a long-standing meeting place for students from all over the world. To the south, the boulevard’s next intersection is with the rue des Ecoles, where the Collège de France was founded by François I to counterbalance the conservative University of Paris. Le Collège du Roy, or King’s College, as it was then called, used French rather than Latin, as was customary elsewhere in the university district (hence the Latin Quarter). Hebrew and Greek were taught here as well as Latin, which is why it was also known as le Collège des Trois Langues. It has preserved its excellent reputation and spirit of modernity to this day.

Legend has it that the Coupe-Chou restaurant, on the rue Lanneau, occupies the site of a medieval barber shop, where the barber used his razor (coupe-chou), not to shave his customers, but to slit their throats and abscond with their money. Today’s Coupe-Chou is an exquisitely romantic restaurant with wood-burning fireplaces, an ideal place for a cozy dinner on a rainy winter night.

Rue de la Montagne-Sainte-Geneviève climbs up to the church of Saint Etienne du Mont, which houses the tomb of Saint Genevieve, the patron saint of Paris, who converted King Clovis to Christianity in the 5th century and is credited with miraculously saving the city from attack by Attila the Hun and his 700,000-strong army. It is a beautiful church, boasting the city’s only surviving rood screen, as well as an ornate 17th-century organ and a collection of splendid stained glass windows from the 16th and 17th centuries, displayed in the Chapelle des Catéchismes. Both Blaise Pascal and Racine are buried at Saint Etienne.

Just to the left as you leave the church is the Panthéon, designed by the architect Jacques Germain Soufflot on a commission from Louis XV to fulfill a vow made when he was desperately ill. Converted into a mausoleum for the nation’s heroes after the Revolution, the Panthéon houses the tombs of Voltaire, Rousseau, Soufflot, Victor Hugo, Emile Zola, the elder Alexandre Dumas and Marie Curie, the first woman granted the honor of burial here. Antoine de Saint-Exupéry, the author of The Little Prince, has only a plaque, because his body was never recovered after his plane crashed in the Mediterranean during World War II.

Just behind the Panthéon is the rue Descartes, where Ernest Hemingway rented a room to work in at no. 39 because he believed it had once been occupied by the poet Verlaine. Newly married to Hadley Richardson, Hemingway lived around the corner at 74 rue du Cardinal Lemoine at the time. (Across the street, at no. 71, James Joyce was finishing Ulysses.) Hemingway also haunted the Place de la Contrescarpe, which was, according to George Orwell, a dreadful neighborhood where no policeman dared to venture on his own after dusk. Orwell lived at 6 rue du Pot-de-Fer in 1928. Today, the tree-lined Place is surrounded by upscale cafés. Off to one side rue Mouffetard is a popular market street, where the old church of Saint Médard provides a lovely backdrop to the colorful food stalls. The Mouff’ market is open daily except Monday, but it’s best on Sunday mornings, when local shoppers and street musicians combine to create a happy bustle. One music group, called Mouffetard Musette, hands out songsheets and invites everyone to join in, singing and waltzing in the street to traditional accordion tunes.

Thirza Vallois is the author of Around and About Paris, Romantic Paris and Aveyron, A Bridge to French Arcadia. website

From the France Today Archives