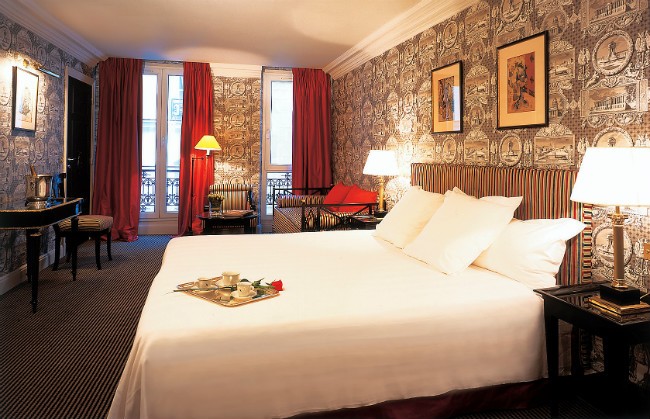 The Villa d’Estrées is a fabulous boutique hotel in the heart of Saint-Germain-de-Prés, on the artistic Left Bank of Paris. In a 17th-century building, the residence harmonises the chic comfort of a typical Parisian apartment with all the luxuries expected of a modern four-star hotel.

Location-wise, the Villa d’Estrées is hard to beat. The narrow, quiet rue Gît-le-Coeur leads onto the Quai des Grands Augustins – directly facing the Palais de Justice on the Île de la Cité. Nôtre-Dame cathedral is less than a five-minute walk away, and you can (just!) see the Seine passing by the bottom of the road.

But despite its centrality, a night here means blissful, unbroken sleep. The side street is completely silent and far enough from the quay for any chance of disturbance. Cars don’t venture down here, and though there’s an Irish pub at one end and a Canadian one at the other, disorderly noise pollution is pleasingly absent.

Instead, you can enjoy close proximity to all the action – by day and night –without feeling like you’re right in the thick of it. The neighbouring rue Saint-André-des-Arts is awash with crêperies, Lebanese restaurants and fashionable boutiques, as well as some classic bistros and an art-house cinema. A two-minute walk will lead you to the pavement cafés and street performers of the Place Saint-Michel, which you can cross over to reach the heart of the Latin Quarter and its winding cobbled streets, lively Greek restaurants and the famous Shakespeare & Co. bookshop. All this is on your doorstep, without compromising on security or a great night’s sleep. The air conditioning is a bonus, too, in the sometimes-oppressive heat of a Parisian summer.

Inside, the hotel is a little refuge from the capital’s buzz. The beds are huge; the mattresses are firm yet comfortable; the design is classic but fresh. Every detail is attended to with care: the staff are endlessly helpful and welcoming, providing recommendations of local attractions as well as breakfast in bed.

With double rooms ranging from deluxe to suites to apartments, and a sister hotel, the Résidence des Arts, across the street, you’ll easily find your Parisian base. In typical boutique style, each room is uniquely decorated, eliminating the somewhat clinical feel of some larger chain hotels. Tasteful, peaceful, and stylish to boot – keep this hotel in mind for your next Parisian getaway.

Double rooms start at €215 per night (excluding taxes and fees).