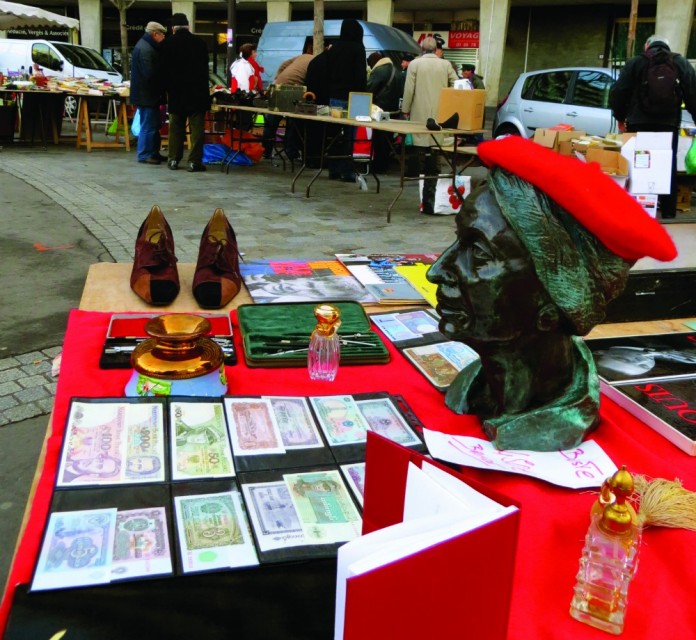 Lovers of Parisian lore often wish today they could experience the richly riotous ambiance of Les Halles, the giant city centre food market which was demolished in 1971. Dubbed ‘le Ventre de Paris’ (the belly of Paris), it was a village unto itself, one with its own rhythms and language (louchébem, the butchers’ slang). Parisians and tourists alike would soak up its atmosphere over a 4am bowl of soupe à l’oignon and a vin rouge.

Another market, Le Marché d’Aligre, one of the city’s largest and oldest, once competed with Les Halles – earning the name le Second Ventre de Paris – and it’s still alive and well today. Every day bar Monday, south-east of Place Bastille in the 12th arrondissement, around 200 vendors of fruit, vegetables, fish, meat, cheese and antiques create a joyous commotion along the Rue d’Aligre, in the Place d’Aligre and inside its covered market there. Just don’t ask the mairie for directions…

“We call this market neighbourhood le Marché d’Aligre,” says long-time vendor Jean-François Daniel. “Though if you ask at the Paris town hall, they’ll tell you it doesn’t exist.”

What the city prefers to call the Marché Beauvau was created in 1776, when Gabrielle-Charlotte de Beauvau, head of the Abbaye Saint-Antoine (the future l’Hôpital Saint-Antoine), provided land for the creation of a covered market, which was finally inaugurated in 1781. Rebuilt in 1846, the adjacent street and plaza were later renamed after Étienne François d’Aligre, the Premier Président du Parlement de Paris when the original market was created.

Though steeped in history and populated by citizens and merchants with deep local roots, the Marché d’Aligre is far from frozen in time – it continues to weather rapid gentrification yet remains true to itself. Even as new restaurants, delicatessens and épiceries open alongside the ‘old guard’ of merchants, the area’s reputation is growing as a gastronomic hub where food and culinary traditions are celebrated with verve and simplicity.

On a recent Monday afternoon, a small group of gourmet Francophiles were gathered around a tasting table before a mesmerising assortment of cheeses and wines. “This is so good!” enthused American Clare O’Malley, nibbling a piece of 16-month-aged Comté. “But I want to know what wine you drink with this!” She got her answer when Meg Zimbeck, the cheery tasting guide, poured glasses of a walnut and apple-redolent Côtes du Jura Vin de Voile. Zimbeck has animated countless scenes of joyous gastro-tourism, but usually in such chic quartiers as the Marais or Saint-Germain. However, this tasting was taking place in an area hitherto unknown to many in the group: the Marché d’Aligre.

Zimbeck set up her food and wine tour service, ParisByMouth.com, in the area last spring, in a new high-end cutlery shop, Japanese Knife Company (13 rue de Cotte), across from the Beauvau covered market.

“The clients who come on our tours have often been to Paris many times, but never here,” Zimbeck says. “So it’s fun for them to learn this is the neighbourhood with a lot of the new restaurants that are the talk of Paris.”

The restaurant boom arguably started in 2006 with Swedish chef Petter Nilson’s arrival at the greatly fêted La Gazzetta (29 rue de Cotte). Further acclaimed establishments seem to have opened within 500 metres of the market every other year since – the Italian eatery Caffé dei Cioppi (159 rue du Faubourg-Saint-Antoine) in 2008; the vastly successful solo project of Giovanni Passerini, Nilson’s former assistant, Rino in 2010 (46 rue Trousseau – replaced in 2014 by Les Déserteurs); and Bertrand Grébaut’s Septime (80 rue de Charonne) in 2011, which was awarded a Michelin star in 2014.

Cheap rents are drawing in chefs, but an almost daily market – now unheard of in Paris – is equally attractive, says Luigi Nastri, La Gazzetta’s new chef: “At our restaurant we change our menu every day, so having Marché d’Aligre outside my door is a constant source of inspiration.”

But what really stimulates creativity, says Nastri, is something which seems to be in the area’s very DNA: “I like to cook for those who live in the neighbourhood because people here are very open and curious to try new flavours. There is a pursuit of quality in this neighbourhood, and La Gazzetta taps into that.”

That DNA can also be found in such veterans as Jean-François Daniel, whose Marché Beauvau stand is picturesquely arranged by his wife, Sylviane. A scholar of France’s diverse microclimates and geography, his selection of heirloom vegetables and top-shelf fruits is exceptional, but he believes that rare needn’t mean exclusive.

“I’ve never felt like I isolated myself by selling high quality or rare produce,” he says. “On the contrary, at some point everyone comes to us with a very particular need, because we will always have things which no one else has. I’m not going to forget that I was born here, this market is my village, and I’ve always believed that one should sell to everyone.”

Daniel has feared for his “village” before, having witnessed the Parisian furniture manufacturing business, which had flourished on Faubourg Saint-Antoine since the Middle Ages, crumble in a matter of years.

“In the 1990s all the furniture workshops were transformed into lofts and apartments, which brought a new type of resident with a different lifestyle and spending power,” he says. “I remember in the 2000s I thought we’d all be pushed out and it would become a quartier de luxe – but not at all. Despite everything, we’ve managed to conserve the spirit of the village d’Aligre.”

In fact, many recent arrivals say that the village spirit drew them in the first place. Four years ago, Sophie Surroque chose Rue d’Aligre to open the delightful, Jaja du Midi (No. 21), which specialises in wine of southern France. Surroque, who’s made it her life’s work to repair the bruised reputation of the wines of Languedoc-Roussillon, was seduced by the “warm and welcoming” neighbourhood.

“It was the fact that there were only these little independent boutiques – spices, wine, cheese, fish,” she says. “That makes for a completely different ambiance, compared to a neighbourhood full of chain stores.”

Like Sophie, Anne-Françoise Toussaint set up her Alsacien culinary embassy, Le Garde-Manger (17 rue d’Aligre) several years ago, armed with homemade spiced Bredela biscuits, Christine Ferber jams and her Father’s recipe for tarte flambée or flammeküeche (a pizza-like base topped with fromage blanc or crème fraîche plus lardons and onions). She saw the bustling street as the perfect location to tempt Parisian palates with the delights of Alsacien cuisine.

“The people who come to Aligre are generally bon vivants who are really interested in French culture,” she says. “I have clients in the neighbourhood who sometimes had never heard of a flammeküeche, but now eat them every week.”

However, La Graineterie du Marché (8 place Aligre), founded around 1895 and the last of its kind in Paris, is the neighbourhood’s oldest store. In 2005, former advertising director José Ferré took over this institution, where the furnishings haven’t changed since 1958, and the floor dates to the 1930s. One can still buy innumerable spices, seeds and dry goods by weight, while perusing a superb collection of traditional French candies and baked goods usually only available in luxury épiceries.

“The reason you have so many specialised stores in Aligre is that it’s full of passionate people,” says Ferré. “We’re proud to live and work here, and everyone wants to preserve its identity.”

That includes Michelle Parekh, the co-owner of the Japanese Knife Company – where else in Paris besides the Marché d’Aligre would you expect to find a shop selling wares created by Japanese masters which perpetuate 1,000 years of savoir-faire?

“There is a reason you hear so much about this neighbourhood today,” she says, “it’s because there’s a movement happening. Aligre is a place where people are doing something special.”

Until JKC opened in 2014, few Paris chefs were wielding knives made by Japanese artisans. Today, these razor-sharp works of art are adored by professional cuistos and weekend chefs alike. Restaurants love JKC’s sharpening service, and their cutlery workshops – on sushi slicing, etc – are magnets for foodies.

Could any French term for wine be as charming as “jaja”? Visiting Sophie Surroque’s cave, which focuses on her native southern France, particularly the maligned wines of Languedoc-Roussillon, is delightful. The organic sparkling whites, full-bodied reds and sweet vin doux naturel wines suggest the ‘jaja du Midi’ deserves another taste.

The Marché d’Aligre has hundreds of primeurs, but the quality and diversity of the Daniels’ wares is all but matchless. Pink Roscoff onions from Brittany, Jerusalem artichokes, chervil root, Corsican clementines, Nice lemons – its a veritable tour de France.

Offering seeds and other dry goods by weight, graineteries were once ubiquitous in Paris. Today, this one, opened in 1895, is Paris’s last. Cassoulet lovers can buy Tarbais beans, and succumb to owner José Ferré’s mouth-watering traditional gourmandises, from ‘niniche de Quiberon’ candies to the authentic Dijon pain d’épices.

This long-established fromagerie boasts over 350 varieties of cheeses, including 80 kinds of chèvre, Comté aged up to 36 months and Gabriel Coulet’s divinely smooth Roquefort – not to mention Jean-Yves Bordier’s butters. The team happily creates assortments, advises on wine pairings and even loans fondue and raclette sets.