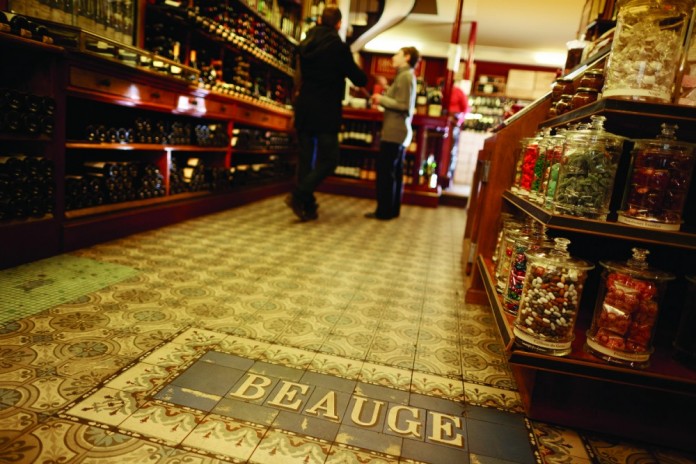 The Galerie Vivienne in the 2nd arrondissement was struggling along when Takada Kenzo discovered it in 1970, and picked it as the location for his inaugural fashion show and first shop, Jungle Jap. By 1976, Kenzo was an up-and-coming fashion guru and opened a spacious flagship on the nearby Place des Victoires. Eliane Tesseraud, who recently retired from the second-hand women’s clothing shop La Marelle at No 21 Galerie Vivienne, remembers Kenzo moving his stuff in a wheelbarrow.

In no time, Kenzo’s new HQ put the neighbourhood on the map as the city’s hub of creative fashion design, outshining for a while the traditional haute couture houses further west. The Galerie Vivienne benefited from this breath of fresh air and it came to the notice of enterprising young people with an ‘eye’ – the floral designer Emilio Robba for example, who settled at No 29-33 in 1979 and still dazzles passers-by with his crimson silk orchids.

But the real kick-off was the 1980 opening of the tea room A Priori Thé at No 35-37, a rare proposition at a time when Paris was still largely devoted to café culture and protracted three-course lunches. American Peggy Hancock remembers stumbling upon the arcade in 1979: “I was completely enchanted. It was deserted, silent and magnificent. The mosaics, the arcades, and just the utter emptiness right in the heart of Paris.”

She would have been hard put to imagine it packed with thousands of people, led by composer Hector Berlioz into a thunderous Marseillaise, during the 1830 July riots which brought Louis-Philippe to the throne. The press agent who worked for Peggy and her partners suggested this address, sensing that their tea room would revitalise the arcade. The “one-dish, lighter meals with salad on the same plate” was also her idea. “It was almost unheard of at the time”, Peggy recalls. With so many newspapers based in the area (sadly, no longer), word spread fast about this new ‘must’ address, with its “American lunch”, exotic crumbles, brownies and cheesecakes prepared by Terry, Peggy’s British husband, and the adorably English-looking interior.

A Priori Thé became packed with “journalists and celebrity clientele that made the gossip pages” — Isabelle Adjani, Paloma Picasso, Inès de la Fressange, Kenzo and, from 1986, Jean-Paul Gaultier, who opened his first boutique at 6 Rue Vivienne, which flanks the arcade.

The Galerie Vivienne first opened as the Galerie Marchoux in 1826, being named after its proprietor, Maître Marchoux, the President of the Chamber of Notaries. It was an upscale arcade – a galerie as opposed to the more ordinary passage – in a prime location, between Rue Vivienne (“the purse of Paris”, to quote the chronicler Louis-Sébastien Mercier, with “more money in this single street than in the rest of the entire city”) and Le Palais Royal, the playground of the privileged.

The business-minded landlord of Le Palais Royal, Philippe d’Orléans, the Duc de Chartres and a cousin of Louis XVI, surrounded the gardens with arcades which still stand today and also erected, on its south side, the city’s first shopping arcade, La Galerie de Bois, which is long gone. “Cousin,” said the King, “you have turned shopkeeper and no doubt we shall see you only on Sundays.”

Galerie Marchoux sheltered passers-by from the chaotic traffic, wet weather and mud, enticing them to loiter and consume under its luminous glass roof, which was gas-lit after dark. This precursor to the modern mall featured 70 shops – luxury clothing, leather boots, haberdashery, engravings, wine merchants, tailors, opticians, a gourmet restaurant, a chic café and a bookshop, Siroux, which is now the Librairie Jousseaume at No 45, this being the only establishment which has weathered the time since 1828. There were also residents living above the shops – Eugène François Vidocq, for one, at No 13. The notorious criminal turned detective is the father of modern criminology and the model for a string of fictional characters, including Victor Hugo’s Valjean and his persecutor Javert, Balzac’s Vautrin, Dumas’s Monsieur Jackal and, not least, Gaboriau’s Monsieur Lecoq, who influenced the shaping of Sherlock Holmes.

Few arcades resisted Haussmann’s bulldozers and none could compete with the new department stores. Vivienne survived because it had been bought up by the Institut de France.

“From the sleeping beauty I had come across in 1979, it changed very quickly as shops which sold stamps and coins and the three traditional printers were replaced by fashionable boutiques”, Peggy Hancock recalls.

François Jousseaume of Librairie Jousseaume remembers the arcade in tatters. The bookshop has been in the family’s hands since 1900, when his great-grandfather went into partnership with the widow of Albert Petit-Siroux. François replaced his grandfather in 1987 and has seen big changes since the 1996 departure of the National Library, the former Bibliothèque du Roi, set up on Rue Vivienne by Louis XIV’s Minister Colbert. Its presence was a pull to the book trade, notably to Rue de Rivoli’s world-renowned Galignani, the first English bookshop established on the continent, back in 1801.

Jean-Jacques Moncomble, now the most senior member of staff at Legrand Filles et Fils, which is situated in the arcade but has its main entrance on Rue de la Banque, joined the company in 1990. At that time the cave was run by Francine, whose grandfather, Pierre Legrand, bought Beaugé’s gourmet épicerie in 1919 and branched off into the wine business.

In those days, wines were selected from the barrels of Bercy Warehouses (now a park in the 12th arrondissement), but Pierre’s son Lucien (Francine’s father), revolutionised the trade by travelling across France to seek out unique natural wines with a distinct terroir and pick select brut sec Champagnes, such as the Tarlant from Oeuilly-sur-Marne near Épernay, a 13.5-hectacre vineyard which has belonged to the Tarlant family since 1687. In a then male-dominated preserve, the 1993 arrival of Japanese wine expert Emi Sato was another revolution. Her presence allowed the building of bridges to Japan, which recently led to the takeover of the company by Amane Nakashima.

Besides Emi, the overwhelming majority running the show at Galerie Vivienne are women, each exuding their individual ‘French touch’. Never mind that the fabulous silk and velvet shawls of Wolff & Descourtis at No 18 are perhaps beyond your budget. Victoria Wolff will be happy for you to walk in and feast your eyes on her treasures. Her family has been in the luxury textile business since 1875, dealing exclusively in men’s fine cloths. The shift to ladies’ hand-loomed and painted wraps was Victoria’s idea, and came after she visited an Italian manufacturer in Como and was bowled over by his silks.

Madeleine Deny, who writes children’s books, arrived here just after Peggy Hancock. Her wonderland, Si Tu Veux at No 68, offers a medley of hand-picked classic and contemporary toys that is second to none and an extension of the ideas she puts into her books.

Interior designer Joyce Pons de Vier loves bargain hunting when on holiday in southwest France. Her upstairs atelier came with the empty boutique at No 64, “so friends suggested I could arrange it like my home and sell some of my stuff”, a brilliant idea that led to superb encounters with clients.

Isabelle Chupin, the floral designer of L’Aparté at No 48, was also an interior decorator. Her boutique is a fairyland of imaginary flowers, made of silk and mulberry paper she buys in Thailand. Even the President of the arcade’s Business Owners’ Association is a woman, hairstylist Isaura Brachfogen of Salon de Coiffure Isaura at No 20-22, who organizes the Christmas decorations and the Fête du Printemps, complete with music, dancing and Champagne. It is une fête de village, in the heart of anonymous, busy Paris.

The sight and frangrance of François Jousseaume amidst piles of old books warms one’s heart. More than any other shop, it perpetuates the arcade’s timeless feel, and is graced by the lingering spirit of the writer Colette, who used to come over from her home in the Palais Royal.

Japanese caviste Emi Sato proves that the world of wine is no longer a male preserve. This fabulous cave has seen many changes – the original tiles of Beaugé’s former épicerie are still there, but the Legrands have departed, Japan has stepped in, and there is now a wine bar which holds tastings.

Victoria Wolff settled in the galerie with her ravishing displays of Jacquard-woven silks from Lyon and Como, Italy. She creates all of the designs herself, a talent which she may have inherited from her grandmother who was a designer for Vogue.

Madeleine Deny presides over this children’s wonderland sans pareil. “Don’t let them grow too fast”, she says to parents. “Let them play.” An eternally youthful fairy godmother, she even looks the part, guiding both parents and children, and one-time children who return with their offspring.

Joyce has arranged her exquisite little place with trinkets and furnishings that feel like her home, all unearthed during bargain-hunting expeditions. An interior designer with a discerning eye, she is also a welcoming hostess, making this a place where it is good to linger.