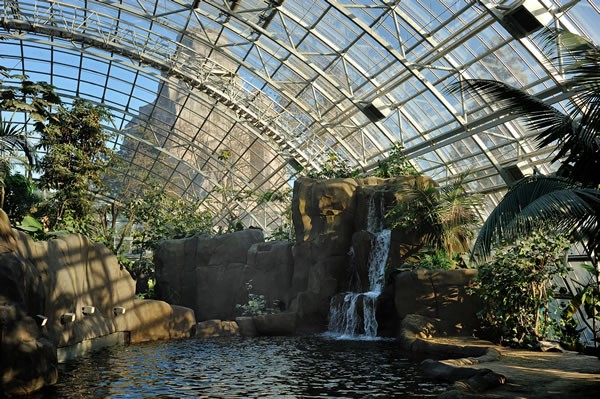 If you happened to be strolling across Place de la République in early April, you were struck by a strange sight. An enormous wooden crate, turned on its side next to the famous bronze statue, spilling straw across the pavement. On closer inspection, you’d see that a picture of a zebra was depicted on the side. In other parts of the city, it appeared that baboons and leopards had been let loose in Paris. Overlooking the Eiffel Tower, a towering giraffe crate was overturned on that prime piece of real estate: the Trocadéro.

This whimsical marketing campaign created a lot of hype in advance of the opening of the Parc Zoologique de Paris. As did a Twitter handle for Adeline the Giraffe, one of the zoo’s star inhabitants who has been tweeting nonstop (often hilariously) from her new digs just outside Vincennes.

After six years of renovations (to the tune of 167 million euros), the famous zoo is back in the spotlight, its artificial rock butte—soaring above the skyline—creating an otherworldly ambiance.

First opened in 1934, the zoo has been completely reinvented (no cages here!). The focus is on conservation, and the animals rule the roost. The park is divided into five open “biozones”- including Patagonia and the Sahel/Sudan- which are populated with 180 different species, many of which are threatened (like Grevy’s zebra).

Particularly exciting is the giant greenhouse which recreates the tropical climates of Guyana and Madagascar. As birds fly overhead, sloths cling to the trees, and lemurs dance on the ground, you’re immersed in the natural habitat. It’s like taking a trip around the world while hanging out in Paris.

Also noteworthy: The veterinary clinics are open to visitors so you can get a peek at what goes on behind the scenes.

France Today explored the zoo prior to its April 12 opening date, and we understand why it’s expected to become the most popular such attraction in France (after Disneyland). We recommend booking tickets online to avoid the lines.

Practical information: The entrance to the Parc is on avenue Daumesnil near the Porte Dorée métro station in the 12th arrondissement. The full-price adult ticket is 22 €. Youth tickets (12-25 years) cost 16.50 € and children’s tickets (three and 11 years) are 14 €. Annual passes are also available. Until mid-October, open from 10 am -6 pm on weekdays, and from 9:30 am-7:30 pm the weekends. From mid-October to mid-March, hours change from 10 am to 5 pm. For more information, visit www.parczoologiquedeparis.fr

In the Footsteps of Josephine Baker