Home Travel Paris On the Trail of George Orwell in Paris

Following a well-trodden literary path taken by authors such as F. Scott Fitzgerald, James Joyce and Ernest Hemingway and hoping to join their illustrious ranks, 25-year-old George Orwell (or Eric Blair – as he was called then) arrived in Paris in February 1928. Much to the disapproval of his parents, Orwell had, after five years of service, resigned from his commission with the Burma Police and declared his intentions to become a writer.

Orwell spoke French fluently and already had familial connections with Paris. His aunt Nellie Limouzin lived in the city. Orwell was also of French descent. His mother, Ida Limouzin, was born in England to a French father and an English mother. Apart from the obvious literary draw, there was another reason why Paris attracted him and so many would-be artists and writers. A plummeting exchange rate made the British pound and the American dollar strong against the French franc. One pound sterling was then worth 120 francs which meant what little money he had would stretch much further in Paris.

Orwell took up residence in rue du Pot de Fer, a dingy, cobbled street in the Latin Quarter and fictionalised as the rue de Coq d’Or in his first published book, Down and Out in Paris and London, and which he describes as:

“a ravine of tall, leprous houses, lurching towards one another in queer attitudes, as though they had all been frozen in the act of collapse. All these house were hotels and packed to the tiles with lodgers, mostly Poles, Arabs and Italians. At the foot of the hotels were tiny bistros, where you could be drunk for the equivalent of a shilling. On Saturday night about a third of the male population was drunk… My hotel was called the Hotel des Tres Moineaux. It was a dark, rickety warren of five storeys, cut up by wooden partitions into forty rooms”.

Orwell’s first published work, La Censure en Angleterre, appeared in Henri Barbusse’s paper, Mode, a highly regarded French literary journal, in the autumn of 1928 and not to be confused with the daily newspaper of the same name.

Orwell had always had health problems and towards the end of February he fell ill with “une grippe” and was admitted to the Hospital Cochin in the 14th arrondissement. He was placed in a public ward where sixty men were crowded into three long rows of beds, and he remained there for the next three weeks. Later he recalled the experience at the Hospital Cochin in an essay “How the Poor die”, which describes the hospital as a dark, filthy place. He described the care as harsh and primitive and particularly his first treatment from one of the doctors:

“The doctor and the student came across to my bed, hoisted me upright and without a word began applying the set of glasses, which had not been sterilised in any way. A few feeble protests that I uttered got no more response than if I had been an animal.”

Orwell was then “cupped” which involved placing the glasses, which had had their air removed by burning a match within them, on his back:

“They only put six glasses in my case, but after doing so they scarified the blisters and applied the glasses again. Each glass now drew out about a dessert-spoonful of dark-coloured blood.”

Just when Orwell thought his treatment had been completed there was another treatment coming … the mustard poultice:

“Two slatternly nurses had already got the poultice ready, and they lashed round my chest tight as a strait jacket… For the first five minutes the pain is severe, but you believe you can bear it. During the second five minutes, the belief evaporates, but the poultice is buckled to your back and you can’t get it off”. 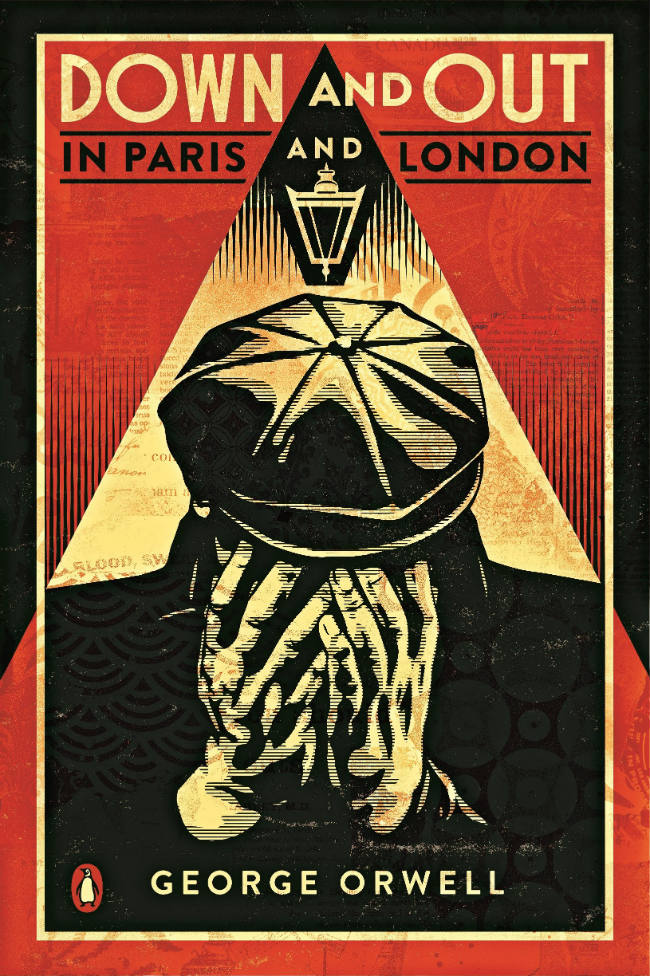 Shortly afterwards another crisis was to strike Orwell. An Italian staying at the lodging house broke into his room and stole most of his money. Although this explanation for Orwell’s loss of finances has been disputed and conflicts with an alternative account which Orwell later related to a friend in which he named the culprit as a woman, Suzanne, who he had picked up in a local café.

Whatever the truth of the matter, the theft of his money left him in a precarious situation. But worse was soon to follow; his English lessons “ceased abruptly” putting further strain on his ever diminishing finances. To get by, Orwell pawned some of his clothes and set himself a budget of living off six francs a day. But, despite his frugality, his “money oozed away – to eight francs, to four francs, to one franc, to twenty-five centimes”. He had only dry bread and for almost three days he had “nothing to eat whatever”. He borrowed a fishing rod and went fishing in the Seine hoping “to catch enough for a meal, but of course caught nothing”. He wrote “The Seine is full of dace, but they grew cunning during the siege of Paris, and none of them have been caught since, except in nets”.

Finally, a Russian friend and waiter, Boris, helped him to find work in a hotel as a plonguer, a dishwasher, with “a chance of rising to lavatory attendant if trade was good”. Orwell described the work as “thoroughly odious” and found it difficult to imagine that “people spend their whole decades at such occupations”. The plonguer he had replaced, a sixty something year old, had stood at the “sink thirteen hours a day, six days a week”. But Orwell’s time as a dishwasher was short-lived. After eighteen months in Paris he returned to England.