When now? Who now? Kirsten Dunst, that’s who! And just like that, my musician friend Sandrine crushes our final round of celebrity boasts, winning the last slice of the tarte à l’orange with a tale she’s spilled before. Even so, it never gets old. Sandrine, see, taught Kirsten how to play the harp for her title role in Sofia Coppola’s Marie Antoinette.

Pop goes another cork of bubbly. “She wins!” our friends holler, happily crammed cheek by jowl in the tiny flat as midnight approaches.

It’s Sandrine’s birthday, so I’d planned to give her one of the plump and perky white vases I’d found earlier in the day at the Porte de Vanves flea market.

I had been itching to hunt for old containers ever since a rendezvous at the Hôtel de Crillon a few weeks earlier, when I had soared up the gilded steps to its Salon des Aigles for a press conference, only to be stopped mid-flight by Djordje Varda’s gravity-defying floral marvels. Talk about being nipped in the bud – I was both bitten and smitten.

Happily, a dealer at this morning’s puces had been able to feed my new petal passion.

We have King Louis XV to thank, not only for the Hôtel de Crillon (1755) but also for launching the Royal Manufacture of Sèvres in 1738.

Stepping up to the proverbial plate, Louis XVI kept grandpa’s saucers spinning with annual expos at Versailles that showcased neoclassical show-stoppers inspired by antique vessels from Pompeii and Herculaneum, where the excavations were having a bit of a moment.

Igniting a buzz, he and wife Marie Antoinette encouraged court favourites not only to shop at the annual sale, but also to share their hauls at palace suppers and picnics. With fidelity discounts and payment plans, top-secret product drops and imperial collection copycat rollouts, the campaign was way ahead of its time. Word spread, as porcelain peaked in popularity. 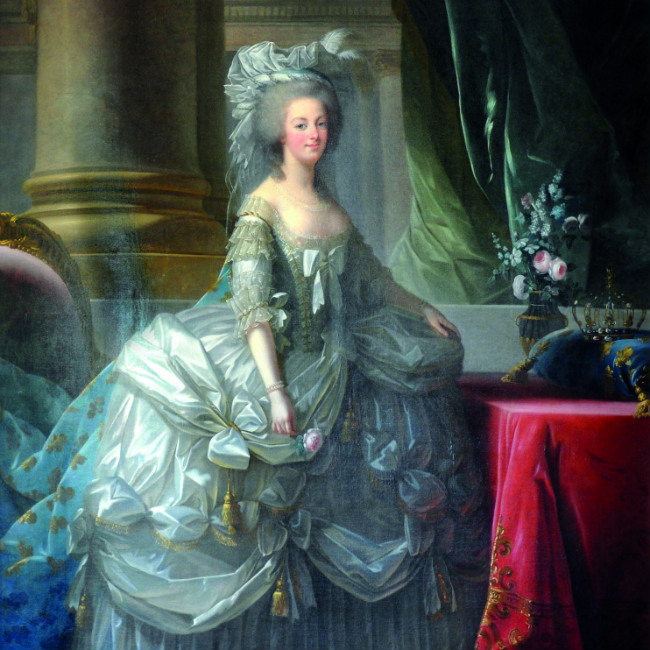 Sallying forth through flea stalls of faded gilt and glorious grit, I searched for vases on tables and in bargain bins, stopping just once for coffee at the corner snack shack. Then suddenly I spied not just one, but eight, bulbous milk glass vases at five euros a pop, with little pewter lids still attached. “I’ll take them all!” I cried.

Racing to the organic food market for some pollinator-friendly plants, I decided to think pink and seasonal: roses, peonies and hydrangeas, and maybe some ivy and honeysuckle. With barely two hours to go, I sprinted home to primp my milky vases, nearly forgetting to snip the stems on the diagonal with razor-sharp precision.

Throughout that evening’s fête, there was no wilting. Surrounded by my newly-acquired jardinières, my friends gathered for sing-alongs and the usual chatter about cheese. Trending tonight: Livarot, a 13th-century fromage from Normandy that’s barnyard smelly. A force of nature, it will fortify their spirits as they run to the Métro before it shuts down for the night.

Shouting “Bon Anniversaire, Sandrine!” in the last-minute revelry, I hand her both the tarte and one of my vases. Our friends cheer.

“But where are your leeches hiding now, dear Teddy?” my scientist-professor pal Jean-Michel says, with a sly wink. “You do know, don’t you, that these ‘vases’ are medical leech jars?”

“But of course!” I say, my reddening cheeks giving me away. Never too shy to teach a lesson, he begins to explain that jars like these won gold medals for design at the 1888 World Hygiene Expo.

Sandrine interrupts. “You’re missing the magic, Jean-Michel! If Duchamp could turn a bottle rack into art, then surely Teddy can turn a leech jar into a vase!” Amid the laughter, we all link arms for just a few more moments before it’s time for the mad dash for the final Métro.