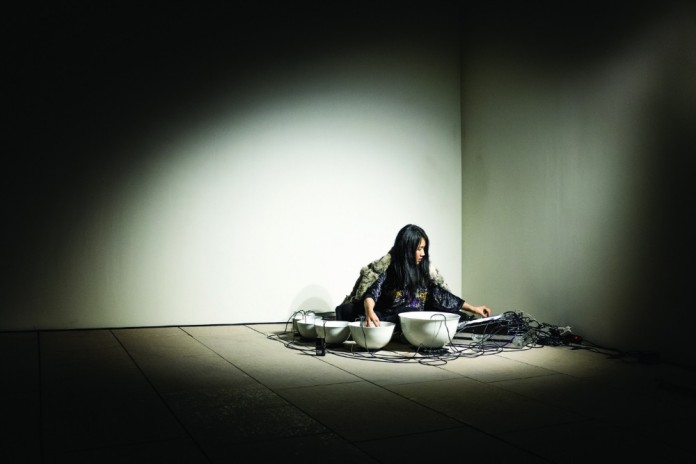 The glass and steel-clad Fondation Louis Vuitton, which opened in October 2014, sits impressively amid the grasses of the Bois de Boulogne, flanking the Jardin d’Acclimatation, the oldest park in Paris. The Jardin was inaugurated by Emperor Napoléon III in 1854 and it was there that Marcel Proust first saw his beloved patron, Princess Mathilde. Some 160 years on, thanks to the startlingly modern museum, this historic green space now boasts one of the most contemporary backdrops in all of France.

The cubist superstructure, which is also known as ‘the cloud’ and ‘the iceberg’, was designed by the 85-year-old Canadian-American architect Frank Gehry. His signature style is as prominent in the Fondation as it is in his previous works, such as the Guggenheim in Bilbao and another of Paris’s major cultural spaces, the Cinémathèque Française.

Demonstrating Gehry’s trademark avant-garde style, the Fondation spurred a certain amount of disapproval from the French media and a number of local residents, some of whom campaigned against the construction of a 50-metre high building in a public conservation area. However, the privately funded project went ahead, with France’s National Assembly arguing that it was to be a work of art for the whole world to see.

Sporting ‘sails’ of some 3,600 specially made glass panels, supported by 179 girders, the Fondation boasts 11 galleries and covers 11,000sqm. The construction team knew that, if all of the poetic movement that Gehry envisioned was to be fully realised, their task meant serious innovation. “Everything had to be reinvented,” confirms Christian Reynen, the project’s Executive Director, “even our working methods.”

However, Pedro B Ortiz, an architect and Madrid’s former Deputy Mayor for Culture, thinks that the Fondation’s design isn’t entirely forward-looking. Ortiz spent part of his childhood in Paris, which he still considers to be his home city.

“The building has subliminal references to Paris,” Ortiz says. “For instance, the sailing ship seen in the Coat of Arms of Paris, and the abundant use of glass, which references the French Art Nouveau movement when iconic buildings like the Grand Palais, the Petit Palais, and the Quai d’Orsay were built. In addition, the use of steel also echoes the Eiffel Tower.”

The Fondation’s lofty Galerie 4 opened with an exhibition focussing on Gehry’s design and the museum’s construction process, which ran until March 16.

The building also has a 350-seat auditorium which, during the Fondation’s opening fortnight, hosted pianist Lang Lang and also, echoing their 2012 appearance at New York’s Museum of Modern Art, the pioneering German electronic group Kraftwerk.

The opening also saw artist Isa Genzken’s Rose II displayed in the atrium foyer, plus video art pieces 6 Septembres by Christian Boltanski and Pierre Huyghe’s A Journey that Wasn’t, and galleries dedicated to the works of Gerhard Richter, Ellsworth Kelly and Bertrand Lavier.

The exhibitions are scheduled to change roughly every three months, which will allow many further works from the private collection of Bernard Arnault, the Chairman and CEO of Moët Hennessy – Louis Vuitton (LVMH), to be shown. The second phase, which will run until March 30, includes works by Maurizio Cattelan, Alberto Giacometti, Tacita Dean, Annette Messager, Wolfgang Tillmans and Giuseppe Penone. The Fondation also boasts a ground-floor restaurant, Le Frank, helmed by Michelin-starred chef Jean-Louis Nomicos, and across the atrium sits a well-stocked art bookshop.

The French National Assembly’s endorsement of this major, privately-funded project – albeit by an historic, publicly-traded but largely family-run French maison – has raised questions from press and public regarding the nature of artistic patronage in l‘Hexagone.

In pre-Revolutionary France, the arts were synonymous with wealth and influence, being monopolised by religious and royal establishments. However, after the monarchy was abolished, art was rendered accessible to a wider audience – arguably, starting with the opening of the Louvre in 1793 – and this idea of ‘public art’ has since become a central tenet of free-thinking French culture.

The opening of the Fondation underlines another slow transition, towards patronage being provided by luxury brands. Although they provide significant funding for more ambitious projects, luxury brands also use art to better their image – as did pre-Revolutionary art patrons.

“My passion for the arts in all their forms and this long experience of supporting them led me to conceive the Fondation Louis Vuitton,” said Arnault, “an innovative space in Paris, open to today’s artists and their work, and welcoming – and accessible – to all kinds of visitors.”

Indeed, the Fondation’s art is accessible but at a price, as it is at the Fondation Cartier pour l’Art Contemporain in Paris, which was designed by Jean Nouvel and opened 30 years ago. A full-price ticket for the Fondation Louis Vuitton costs €14, and it’s €10.50 for the Cartier museum. Although both facilities offer reduced-price entrance fees for many social groups, this has still caused some controversy from those who think that access to art should be as close to ‘free’ as is possible. In contrast, visiting the art exhibitions at the Espace Culturel Louis Vuitton, which opened atop the maison’s flagship store on the Champs Élysées in 2006, is completely free of charge.

Other art venues supported by luxury brands include the three-floor Espace Pierre Cardin, which was launched by the French couturier in the 1970s and encompasses a theatre, cinema and exhibition galleries. A big art fan, Cardin also owns Maxim’s, an Art Nouveau restaurant renowned for its collection of works, and the Espace Evolution, both of which are in Paris. Cardin has also opened his former residence, the Palais Bulles on the Côte d’Azur, as a museum. Meanwhile, the art-focused Château Lacoste in the Lubéron, is also open to the public.

The FLV, as it’s sometimes called, received wide acclaim in the run-up to its inauguration, not least for Gehry’s rule-breaking design. That level of architectural prowess and avant-garde thinking may be just what Paris needs to catch up with its more modern ‘world city’ peers.

“Paris is lagging behind in comparison to other cities, like London and New York, but also the Middle East, where the sky’s the limit and anything is possible,” says Parisian gallery owner Martha Barthes. “We need to stir it up, make things more dynamic and varied, and the FLV is perfect for that.”

However, once again, Gehry’s approach to architecture has met with some criticism from certain quarters – even from those who do find value in it. Despite praising the building’s historical references, Pedro B Ortiz called Gehry’s design “heavy and bulky”, contending that it “looks more like a worm that creeps than a boat that flies”.

Taking the longer view, the last ‘game-changing’ building of this scale to be built in Paris, aside from the recent overhaul of Les Docks on Quai d’Austerlitz, was the Centre Pompidou, which opened in 1977, and before that the Eiffel Tower, at the end of the 1800s.

“The Fondation isn’t like any other building in the city and I can see why people don’t like it,” says Parisian news journalist ‘Marc C’, “but it’s important to keep innovating. We must put a stop to this typically French schizophrenia when it comes to change and evolution. Most of us don’t want Paris to stay a museum city but at the same time we don’t want change. We must make up our minds in order to move forward in the world and stay competitive.”

With the Fondation, Gehry and his team have knocked down several cultural boundaries. Such an irregular building shows Paris, which is often chastised by its own citizens for being a ‘museum city’, in a whole new light of possibilities.

It’s not often that colossal contemporary structures see daylight in Paris. For instance, building permission for the latest experimental project proposal, the ‘Tour Triangle’ in Paris’ 15th arrondissement, was denied at the end of 2014. The Fondation, which is lucky to have ‘slipped through the net’, is a gleaming example of offbeat architecture that certainly seems to be a step in the right direction for the City of Light. Some critics have contended that it may need a little more curatorial guidance in order to reach its full potential as an art museum, but having a luxury brand such as LVMH at its head, with all of its resources, will hopefully allow the world’s most interesting artists to create ever more elaborate and stimulating work.

Whether the Fondation will initially be loathed by Parisians, only to eventually be loved – as were both the Eiffel Tower and the Pompidou Centre – remains to be seen. Nevertheless, this pioneering project is ensuring that Paris remains a cutting edge city on the world stage, right alongside Dubai, London and New York.