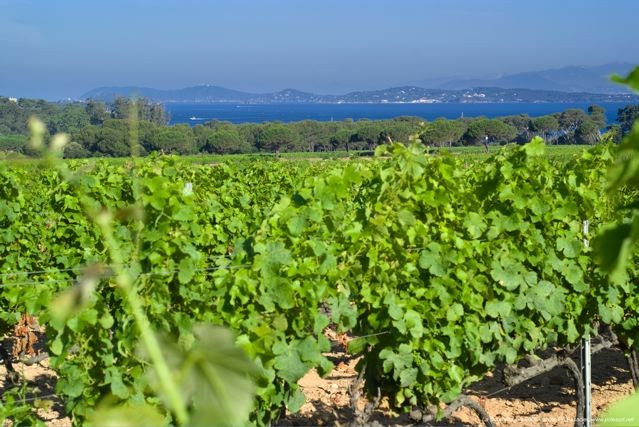 A century ago, François-Joseph Fournier, an enterprising 55-year-old Belgian adventurer who struck it rich in the gold mines of Mexico, decided to purchase the perfect wedding present for his young bride, Sylvia. By chance, he’d learned that there was a Mediterranean island for sale, just eight miles from the southern French coast near Hyères. After paying one million one hundred francs, the pine-forested slab of rock called Porquerolles was all theirs. Before long, Fournier turned it into a thriving agricultural Eden.

Surprisingly enough, the breathtaking cliffs, dazzling crystalline coves and powdery sand beaches of Porquerolles have escaped the grasp of highrise luxury resorts and voracious real-estate tycoons. It might be the Côte d’Azur’s wild frontier: a tangle of untamed subtropical landscapes, far from traffic snarls and overdevelopment. Its name is of uncertain origin—possibly Port Cayrola, “port of lavender” in old Provençal, or Port Quairoles, “port of rocks” in even older Celtic. But those who know the island won’t hesitate for a moment to call it paradise.

At nearly five square miles, Porquerolles is the largest and westernmost of the three Hyères Islands, sometimes called Les Iles d’Or, the Golden Islands, probably because of the gold reflections of their mica shale rocks in certain lights. The small central island, the Ile de Port-Cros, is a nature and marine preserve; neither cars nor bicycles are permitted, but hikers and snorkelers are welcome. The eastern Ile du Levant is host to a military base and several private nudist beaches.

Only 20 minutes by boat from La Tour Fondue at the tip of Hyères, Porquerolles is only a few miles in length and width. Yet, even in peak season, there are inlets on the far side of the island where you can picnic in total privacy. Above all, Porquerolles’s marine wildlife reserve is government protected by strictly enforced rules, as are the countless botanical trails lined with live oaks, olive trees and windswept parasol pines. Cars, camping and smoking (except in the village) are banned. Given the limited number of hotels and the absence of boat service at night, there’s a distinctive luxury about staying the night, once the sunburned rubber-rafting, cooler-lugging day-trippers have taken the last, early-evening ferry to the mainland.

Come sunset, everyone converges on the dusty village square, near the ochre church, where a few local residents are finishing their game of pétanque. The cicadas, as if spurred by the metallic clicking of the boules, are thrumming at an almost deafening level. Then, suddenly, all is silent. As the light fades, the palm trees go black against the fairytale pink and mauve sky.

Don’t miss the sacred island ritual—aperitif time in the village, when the bronzed and freshly showered Porquerollais head for L’Escale, the corner bar on the square and the island’s oldest establishment, a favorite haunt of local yachtsmen and the visiting beau monde.

“People come to these islands to hide out, not to be seen or to party,” observes one Porquerollais old-timer. How do people get around? Most popular are the ubiquitous bikes, which can be rented fully equipped with toddler seats and kiddy carts. Besides the obvious water sports—sailing, snorkeling and scuba diving in the limpid waters—small motorboats are also for rent, without a license, so that you can explore the isolated, rocky southern coast.

In fact, ever since the 2nd century BC, the rocky coast of Porquerolles has endured pillaging pirates and endless attacks by the Moors, Turks, Spaniards and Ligurians. It has also been the site of a penal colony, a way station for the soldiers of the colonial wars, a state-run orphanage and a polluting sulfur factory. That was, of course, before the arrival of François-Joseph Fournier, whose home was his own version of a Mexican hacienda, with a flower-lined courtyard and a staff of 35, including a white-gloved maître d’hôtel. Lélia Le Ber, Sylvia’s daughter, who recently turned 90 and still lives in a villa not far from the village square, recounts the idyllic atmosphere of her childhood in her book, Porquerolles: A Wedding Gift Island (on sale in the tiny village bookstore).

“It was a farm, but my mother kept up all the protocol of the privileged class”, says Madame Le Ber, sitting in her sunlit living room, which is chockablock with antiques, family portraits and photos of Porquerolles in the early days—visions of Out of Africa mixed with Robinson Crusoe. “She would appear at dinner in formal evening dress, and they used only the best porcelain, silver and crystal,” she continues. One of seven children, Le Ber also tells of how they were all given singing, dancing and Italian lessons, and taught by a private tutor. The sprawling, self-sufficient farming domain, which included everything from a school and a doctor’s office to an open-air cinema and a chapel, also housed 150 workers and their families.

These days, the most sought-after spot in Porquerolles is still owned by descendants of the Fournier family, hidden away at the palm-shaded eastern tip of the island. A big, blue-shuttered terracotta Provençal manor, the luxurious 50-room hotel Le Mas du Langoustier has just about everything you’d expect from an island retreat: lovely modern rooms, a grassy tree-lined garden, a pool, tennis courts and two lovely private beaches—one of them with black sand. The bay-windowed, Michelin one-star restaurant, L’Olivier, run for the past 18 years by chef Joël Guillet, is a favorite for incognito heads of state and glitterati, who drop in for lunch by yacht or helicopter. The menu offers Mediterranean-inspired specialties with a local twist, since the chef always uses island-grown herbs, vegetables, wild mushrooms, small game and fish caught in the nearby waters.

Tucked into the corner of the village square near the port, the Auberge des Glycines is a slightly more affordable option, with a price that includes either half- or full board. This Provençal-style inn has simple, slightly worn but charming rooms (best bet: the spacious newly revamped section overlooking the courtyard). Run by Porquerolles-born Florence Sanchez and her chef husband Alain, the auberge’s biggest advantage is that it remains open most of the year. The sunny wisteria-shaded patio restaurant specializes in freshly caught grilled local fish and homemade desserts. On an evening last February, local mariners in the cozy dining room were tucking into a huge platter of freshly caught sea urchins while other guests were wolfing down red mullet and a homemade potato gratin, the perfect comfort food after a long winter day of biking.

Families with kids in tow may prefer to prepare their own meals at the Hôtel Résidence Les Mèdes, located behind the square, which has bright and cheery, modern air-conditioned rooms, most of them with kitchenettes.

Minutes away by bike is one of the loveliest beaches on the island, a curved stretch of white sand surrounded by wind-twisted pines, but be sure to bring your own picnic, easily improvised after a stop at the excellent village bakery, tiny grocery and fruit stand. Among the most splendiferous spots for hiking is the rugged Gorge du Loup, on the southwest coast, and the easternmost beach, La Galère, protected from the mistral wind.

For wine-tasting on the vineyard premises, take a bike ride across the inland paths to the Domaine de l’Ile, the original Fournier vineyard, now run by grandson Sébastien Le Ber, whose delicious fruity rosé, nicely chilled, is the quintessential island beverage. The organically grown grapes are handpicked, and the production is only about 150,000 bottles a year. “There’s something inexplicable about the conditions here,” says Le Ber, “the cool nights, the dampness, the quality of the soil and the sunshine, that makes Porquerolles wine unique.”

Serious wine aficionados will also want to visit the award-winning Domaine de la Courtade, known for its superb white and rosé vintages. As an experiment, 120 bottles of the 1988 Courtade red are stored in France’s only underwater wine cellar, situated 65 feet below the surface.

In August, the island accommodates up to 5,000 visitors per day; in the winter, you’re likely to see no more than the resident population of 350 hearty souls, but never mind. Porquerolles is an island for all seasons. It may also be the last of the Riviera’s secret refuges, where you’ll never hear the throbbing bass of a nightclub or the roar of a car engine. Here, with only the sound of the sea lapping at its shores, the Mediterranean stars seem to shine even brighter.