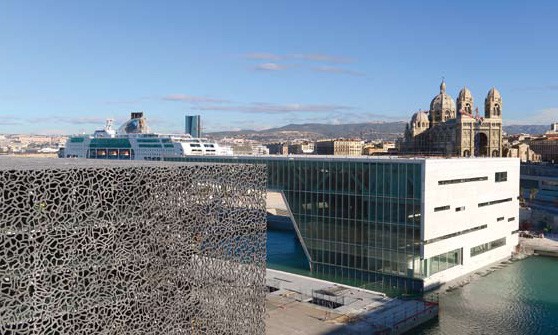 Some 2,600 years ago, Greek traders sailing from Phocaea had the excellent idea of landing in the Lacydon, a rocky Mediterranean cove that’s now the site of Marseille’s Vieux Port. That ancient harbor is still very much alive in popular local folklore, like so much else that suggests Marseille will always be unique, and a world apart from the rest of France.

Among the plethora of gently mocking jokes attached to the city is the tall tale—a galéjade in Provençal—of la sardine qui a bouché le port (the sardine that clogged the port). Emblematic of the alleged tendency of Marseillais to grossly exaggerate—with singsong exuberance and an accent as thick as olive paste—the story is based on a true incident. In 1790, the French naval vessel La Sartine was so badly damaged in a battle with the English that it was beached in the harbor. As the word spread like wildfire that La Sartine was blocking maritime traffic, so did the garble of the frigate’s name. Naturally, the legend stuck.

Once considered the antipode of Parisian sophistication, Marseille is rising above some of those deep-seated stereotypes. Known for the laughable but endearing naiveté of its working class, a notion often nurtured by the novels and films of Marcel Pagnol, the city has also suffered the stigma of crime. Marseille is still pegged as France’s urban wild west—shootouts, drug deals or Mafia killings are sensationalized in the national media, as mayor Jean-Claude Gaudin wryly pointed out recently. “But that didn’t stop us from welcoming four million tourists last year,” he added. “This year, we’re expecting ten million.”

In fact, this year the sun-drenched and gritty port city has a whole new look, spurred by its prestigious status as a European Capital of Culture. (It shares the honor with Provence in general and seven other Provençal cities in particular: Aix-en- Provence, Arles, Aubagne, Gardanne, Istres, Martigues, Salon-de-Provence.)

After years of dust, torn-up streets and throbbing jackhammers, the elaborate and costly (circa €3.5 billion) efforts to spruce up the city are paying off, with glittering new museums, renovated landmark buildings, a seafront pedestrian promenade, design hotels, top-notch restaurants and trendy young designer boutiques with homegrown Made in Marseille labels.

Given Marseille’s bouillabaisse of ethnic groups—Provençal, Corsican, Italian, Greek, Armenian, North African—the Mediterranean theme of this year’s festivities rings true. It’s still a port city teeming with authentic ambiance, but a Riviera resort it is not. There’s natural glamour, without the glitz. The city’s beaches may not compare to Saint-Tropez, but there are limpid calanques, turquoise inlets between limestone cliffs, for swimming and sunning in blissful peace.

When I lived for a year in Marseille in the mid-1980s, my sloping rooftop apartment was on a steep little street that led to the port. I’d often stroll down to the 1930s sailors’ hangout, the quayside Bar de la Marine, where sun-wizened old-timers traded pleasantries over pastis. Today, that working-class neighborhood has morphed into a hip upscale enclave. The Bar de la Marine has been revamped into cool retro, and some of the city’s most interesting small bistrots and original shops have sprung up all around. And my favorite bakery is still going strong—the Four des Navettes has been churning out delicious, traditional orange-blossom-infused boat-shaped cookies in a wood-fired oven since 1781.

Across the harbor, among the ocher houses of the oldest quarter, Le Panier, the gentrification is even more apparent. “It used to be a den of cutthroats, bandits and French Connection types,” says Jessica Venediger, who recently opened Au Vieux Panier, an artsy B&B. “Some people advised against it, but they’ve definitely changed their minds. We’re only a short walk from all the new museums.”

“Marseille is burning hot!” says young native-born designer Ora-Ito. “I bet on this city ten years ago and now it’s a reality.” Son of the architect, designer and jeweler Pascal Morabito, the hometown enthusiast bought and renovated the immense rooftop floor of Le Corbusier’s famous 1950s concrete tower, La Cité Radieuse, and is turning it into a cutting-edge contemporary exhibition space, the MAMO.

And he’s hardly alone. The MAMO (Marseille Modulor) is one of the many new projects in the city’s Cultural Capital makeover. On the Quai Lazaret, the ultramodern dockside concert hall, Le Silo d’Arenc, is a stunningly renovated 1920s grain silo now hosting the performing arts, from contemporary dance and jazz to rock and opera. On the waterfront Esplanade Saint Jean, the spectacular MuCEM (Museum of European and Mediterranean Civilizations), opening in June, will house a vast collection of Mediterranean art and artifacts. Designed by architect Rudy Ricciotti, the immense “vertical casbah”, as he calls it, is a cube dressed in shimmering concrete lace, with a rooftop footbridge linking it to the adjacent 17th-century Fort Saint Jean, once the military guardian of the port.

Beside it stands the Villa Méditerranée, opening mid-March, with an astonishing cantilevered top floor and a basement section immersed underwater. Designed by Milanese architect Stefano Boeri, it’s a venue for exhibitions, film screenings, lectures and forums on local culture. Formerly a ferry terminal, the newly revamped J1 is an enormous hangar housing an exhibition space, galleries, a bookstore and a bar-restaurant with a sweeping view. The new seafront pedestrian promenade, designed by Norman Foster and landscape artist Michel Desvigne, stretches along the Vieux Port to the Joliette docks and is slated to be further widened. The Joliette district also boasts the new glass building of the FRAC (a public fund for buying contemporary regional art), designed by Kengo Kuma and home to a vast collection of works by local artists.

The Tour-Panorama is part of La Friche Belle de Mai, a vast cultural complex being developed on a disused industrial site in yet another up-and-coming, graffiti- scrawled neighborhood. The former artists’ squat was transformed by architects Matthieu Poitevin and Pascal Reynaud into a giant concrete cube atop the roof of an old hangar. The center’s restaurant, Les Grandes Tables de la Friche, serves tasty, affordable Mediterranean dishes in a festive canteen-like atmosphere.

Originally published in the March 2013 issue of France Today

Mama Shelter, designed by Philippe Starck,
is the latest hip hangout, a 127-room trendsetter
haven with a lively terrace restaurant,
a bar and an effervescent nightlife scene. It’s
hidden away in a residential area, but only
a 15-minute stroll from the Vieux Port, and
its low rates offer the best deal in town. 64
rue de la Loubière, 04.84.35.20.00. www.
mamashelter.com. Doubles from €69

In the rapidly gentrifying Le Panier district,
the new Intercontinental Marseille-Hôtel
Dieu, opening in April, is housed in a newly
restored 18th-century landmark hospital.
The 194 rooms, designed by Jean-Philippe
Nuel, are all about the view, and many have
terraces overlooking the port. 6 pl Daviel,
04.91.01.39.74. www.intercontinental.com.
Doubles from €230

Casa Honoré is an elegant, two-story
B&B built in Moroccan riad style around a
courtyard with a palm-shaded pool. Owner,
designer and decorator Annick Lestrohan,
whose shop is next door, turned the former
printing factory on a shopping street near
the Vieux Port into a tranquil oasis decked
with crisp white linens and handpicked
furnishings. 123 rue Sainte, 04.96.11.01.62.
www.casahonore.com. Doubles from €150

The 100-room New Hotel of Marseille,
near the Vieux Port and the Abbaye Saint
Victor, is an ultra-modern rainbow of pop
colors, with a pretty pool. A sophisticated
crowd drops in to sip sunset cocktails at the
buzzing Victor Café. 71 blvd Charles Livon,
04.91.31.53.15. www.new-hotel.com.
Doubles from €235

At the Café des Epices, Arnaud de
Grammont was among the first of the hip
young chefs inventing new takes on marketdriven
Mediterranean-style dishes. On a
square near the Vieux Port, it’s a lovely spot to
dine on a summer night. Reasonable prices,
reservations advised. 4 rue du Lacydon,
04.91.91.22.69. www.cafedesepices.com

On the gentrifying Cours Julien, La
Cantinetta is a bobo chic hangout with lipsmacking
Italian cuisine in a charming retrobistrot
atmosphere. Reservations a must.
24 cours Julien, 04.91.48.10.48.

Down a tiny street and up a flight of
stairs, Le Restaurant du Rowing Club de
Marseille is the 1950s-style canteen of a
local rowing club, but open to nonmembers.
Terrific for tapas or pastries, served on a
huge terrace overlooking the marina.
34 blvd Charles Livon, 04.91.90.07.78.
www.rowingmarseille.fr