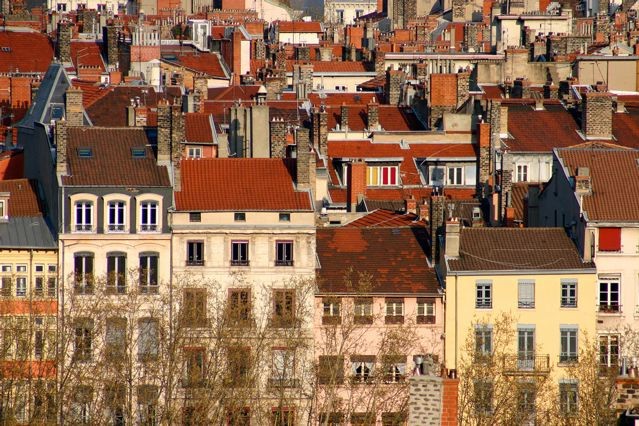 With its narrow cobbled streets, medieval churches and magnificent Renaissance buildings, Lyon is every inch the imposing European city, its story dating back more than 2,000 years. But if it boasts the oldest Roman theater in France and a splendid 17th-century Beaux-Arts museum that’s called a petit Louvre, it’s also in the forefront of contemporary art and architecture, with the futurist Saint-Exupéry TGV rail station designed by Santiago Calatrava, an opera house renovated by Jean Nouvel and the Cité Internationale convention center and contemporary art museum by Renzo Piano. There’s even a double-helix underground parking lot conceived by architects Jean-Michel Wilmotte and Michel Targe working with artist Daniel Buren—peer into the periscope on the Place des Célestins for a look at its dizzying mirrored vortex. And currently under construction is the massive urban renewal project Lyon Confluence, at the junction of the city’s two great rivers, the Rhône and the Saône.

It all started in 43 BC, when the Romans founded Lugdunum—raven’s hill—on the hill now known as Fourvière, overlooking the Saône. The hilltop city soon became the capital of the vast territory called the Three Gauls. It was the great hub of the Roman roads connecting Aquitaine, the Rhine, the Mediterranean and Italy, and it was the birthplace of the Emperor Claudius.

Perfectly positioned as a trading center, during the Middle Ages the city flourished—banking, printing and publishing, churches, abbeys, bridges. In the 14th century Lyon was annexed to France, and under François I artists and artisans from Italy brought an Italianate look—and a silk industry—that persisted as the city spread eastward from the medieval and Renaissance Vieux Lyon on the banks of the Saône to the narrow 18th-century Presqu’île, or peninsula, between the rivers. As Jacquard’s new programmable loom revolutionized the silk industry, the hill called Croix-Rousse at the top of the Presqu’île became the silk-workers’ quarter. In 1831 one of the first recorded uprisings of the Industrial Revolution was launched there by the silk-weaving canuts (derived from the word for bobbin). Although the workers’ demands were not met, the revolt and subsequent demonstrations gave Lyon and the Lyonnais a lasting reputation for resistance and rebellion.

During World War II, the city was a stronghold of the French Resistance. Resistance hero Jean Moulin, captured at a June 1943 meeting with other leaders in the Lyon suburb Caluire-et-Cuire, was interrogated and tortured by Gestapo chief Klaus Barbie, known as “the butcher of Lyon”. Questions still remain over who betrayed Moulin; Barbie, who lived in South America for decades after the war, was finally tried and convicted of crimes against humanity, and imprisoned in Lyon until his death in 1991. His former Gestapo headquarters is now a museum, the Centre d’Histoire de la Résistance et de la Déportation.

Lyon is defined by its geography. The city center today is the Presqu’île, sandwiched between the two rivers and flanked by the two hills: Croix-Rousse to the north, known as “the hill that works” because of its silk-weaving history, and on the west Fourvière, “the hill that prays” because of the gleaming white, late 19th-century Notre Dame basilica that dominates the Lyon skyline, built on the site of the old Roman Forum.

At the foot of Fourvière, Vieux Lyon is considered the greatest Renaissance site in France and second only to Venice in all of Europe; the entire area was declared a UNESCO World Heritage site in 1998. Hop on the steep funicular railway to the top of the hill for a fabulous view. Below you, Vieux Lyon is a mass of red, russet and gray tiled roofs and Renaissance towers in shades of amber and ochre. Beyond it, the whole city spreads out across the two rivers. On a good day you can even see the Alps, but beware—apparently, when they are in view, rain is on the way.

While you’re atop the hill, take a look at the glittering mosaics and swirling statuary inside the basilica, and spin around the corner to the Museum of Gallo-Roman civilization, where the 1st-century bronze Claudian Tables are inscribed with the speech by Emperor Claudius granting Roman citizenship to the Gauls.

Walk through the ruins of the two Roman theaters as you head down the hill, and then wander along the narrow, cobbled streets of the old town, lined with striking buildings from the 14th, 15th and 16th centuries. Rue Saint Jean teems with shops, cafes, bars and restaurants, including a number of the famous Lyonnais bouchons, small bistrots named after the straw plugs used as bottle stoppers.

As you walk away from the Saône, back up the hill, things become quieter, but the architecture no less magnificent. The Rose Tower on rue du Boeuf is worth a look, as is the Maison des Avocats on the rue de la Bombarde. Despite its Gothic facade, the interior of the Saint Jean cathedral is the perfect austere counterpoint to the showy basilica on high.

Much of the charm of Vieux Lyon lies in just meandering around, spotting statues and gargoyles adorning ancient buildings or peering into quiet courtyards, some with spiral staircases or entrances to traboules, secret passageways that were originally just shortcuts up and down the hill, and later used for storage by silk merchants and hideouts by the Resistance.

The Presqu’île’s fine 17th- and 18th-century buildings give the district its solid bourgeois appearance. Here too are the modern city’s two main squares. On the Place des Terreaux, action central with its open-air cafés and restaurants, the ornate Hôtel de Ville faces off against the wildly rearing horses of a monumental fountain sculpture by Frédéric-Auguste Bartholdi and the imposing Musée des Beaux-Arts. In contrast, the vast, treeless, red-gravel Place Bellecour, with its equestrian statue of Louis XIV, covers some 15 acres—one of the largest public squares in Europe. Almost unnoticed, at the far west end, is a bronze statue of Lyonnais aviator and writer Antoine de Saint-Exupéry, with his Little Prince standing over his shoulder.

Linking the two squares are the main shopping street, rue de la République, and the rue du Président Edouard Herriot, with its concentration of luxury shops. The parallel rue Mercière is lined with restaurants offering every kind of cuisine you might wish for, and with tables outside in the good weather there’s always a convivial atmosphere. And a few blocks south of the Place Bellecour is the Musée des Tissus, with a stunning collection of fabrics that absolutely no one should miss.

Walking north towards the Croix-Rousse from the Presqu’île will lead you through an area known as the Pentes—an arty, bohemian area, sometimes verging on the seedy, with many quirky clothing shops, low-key galleries, cafes and bars, including a couple of great late-night jazz clubs, and a labyrinth of traboule passageways. The Montée de la Grande Côte offers a particularly nice walk up the hill, and one of the best overall views of the city.

The village-like Croix-Rousse was once the gritty, bohemian end of Lyon, but property prices have now risen to such a level that it too is solidly bourgeois, but still extremely appealing. Many of the old buildings have very high ceilings—the legacy of the tall Jacquard looms used by the silk weavers—and exteriors are painted in shades of rosy pink, yellow and cream. There’s a luscious daily food market every day except Monday.

At the opposite end of the Presqu’île, the flagship development project of the city, Lyon Confluence, is one of the largest urban renewal projects underway in Europe, transforming huge swaths of the 370 acres of former industrial land at the tip of the peninsula. New homes, offices, innovative public spaces, shops and leisure facilities are being built, at a cost of around €780 million.

The centerpiece, the Place Nautique, will be a giant square connected to and filled with water from the Saône. Phase One of the development project is nearly complete, but the area is still more building site than chic living. Judging from Lyon’s other recent projects, however, it will be a grand success. For example, the Cité Internationale, designed by Renzo Piano and inaugurated on the banks of the Rhône in 2006, incorporates a convention center, apartments, businesses, hotels, restaurants, cafés, movie theaters and the Musée d’Art Contemporain, all looking out onto the wonderful Parc de la Tête d’Or.

Another recent project that has literally changed the face of Lyon is the regeneration of the banks of the Rhône. Six years ago the quays were litter-strewn parking lots, an almost tragic waste of space. Now there are footpaths and bike paths, playgrounds, wildflower-filled meadows and shallow lagoons. You can stroll along the river and pop onto one of the many barge cafés for a drink or a bite. The boats are also a hub of Lyon nightlife, many turning into floating nightclubs after dusk. One, QBoat, has also just won a design award. A similar renovation is now planned along the Saône.

Not only does Lyon offer a cornucopia of wonderful sights and sites that make it an ideal destination for visitors, but it is also a food lover’s magnet. France is, as everyone knows—well, the French at least—the gastronomic capital of the world, and Lyon is often called the gastronomic capital of France, although the origins of this mighty boast are a little unclear.

One of France’s most famous chefs, Paul Bocuse, whose three-star restaurant is just outside of town in Collonges-au-Mont-d’Or, learned his trade with Eugénie Brazier, one of the so-called mères de Lyon, the Lyonnais mothers. In the late 19th century, some of the house cooks of wealthy Lyonnais families began to pursue their own ventures, recording their recipes and opening their own restaurants. Simplicity and subtlety were, and still are, the basis of good Lyonnais cooking.

The city can also draw on fantastic local products: the poultry and cattle of the Bresse and Charolais regions, the wild game of the Dombes, fish from the Savoy lakes, fruit and vegetables from the Rhône and Forez regions. Plus, of course, the wines of Beaujolais and the Rhône Valley.

Traditional Lyonnais cuisine is for those with a healthy appetite, an appreciation of offal and a fairly strong stomach. Charcuterie and other pork products are specialties. Andouillette is a tripe sausage with a very pungent aroma (not to be confused with the spicy Cajun pork sausage of the same name), a machon is a selection of dishes including cured ox muzzles, sheep’s trotters, herring and shredded tripe. Cervelles de canut, however, are not really silk-weavers’ brains, but fresh white cheese mixed with crème fraîche and herbs.

Like Paris, Lyon is divided into districts called arrondissements. Lyon has nine: the 1st is the top of the Presqu’île around the Place des Terreaux; the rest of the Presqu’île is the 2nd; Croix-Rousse is the 4th; and Fourvière and Vieux Lyon are in the 5th.

Les Halles Covered food market in the La Part-Dieu district, with top quality local produce. Try before you buy, then pick out a perfect picnic.

Bocuse on a Budget Scattered around town, the great chef’s five brasserie annexes focus on different aspects of French cuisine:

Originally published in the September 2009 issue of France Today; updated May 2011

Go on a Mindful Escape with LUXYOGA

Go on a Mindful Escape with LUXYOGA