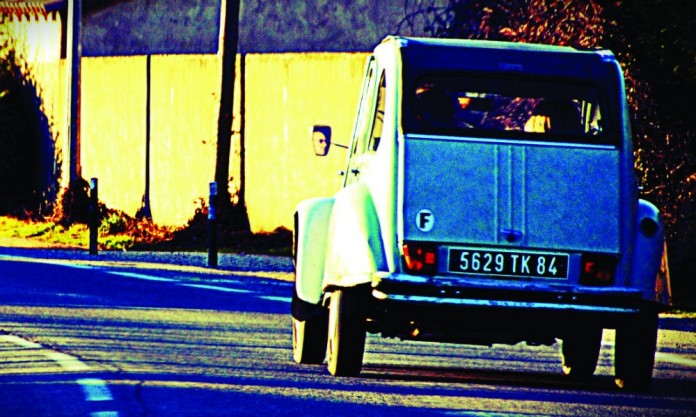 Years after moving to France, I realised I had been driving without insurance. I’d had a nagging doubt about my licence, but each time I brought up the subject, my French husband told me not to worry and that my international driving permit would suffice. Then one day we learned that (as a resident of France) should I have an accident, my insurance contract would be void without a French permis de conduire.

“You need to pass the drivers exam immediately!” my husband urged. Now he was the worried one!

The only student in class to drive herself to school, I was careful to take the back roads and to park several blocks from the Auto-École Rivière. After long weeknights attending classes with students half my age, and having finally passed l’épreuve théorique, the next step would be to navigate the city with a driving inspecteur beside me.

On exam day, I shared the test vehicle with a wide-eyed 18-year-old who had just been ordered to pull over.

“Allez-y!” Your turn! I said a prayer, put on the left turn signal, and drove out into the chaotic streets of Draguignan.

“You don’t need to be so obvious!” the inspecteur snapped when I threw my chin left as I put on the left turn signal. Moments ago I’d signalled a right turn and thrown my chin over my right shoulder in the same conspicuous way. (We had been warned in driving school to exaggerate our gestures during testing to show that we were aware of those “angles morts” or blind spots.)

“Et les vitesses!” the inspecteur grumbled after I’d ground the gears once again. “Oh, but aren’t cars automatique in America?!” he snickered. Though I had been stick-shifting for 16 years, next to the inspecteur I felt like I was driving for the first time.

Having completed the twenty-minute parcours through the centre of town, I followed the inspecteur’s order and pulled up to the curb. Shutting off the engine, I looked up at the American cemetery. This seemed like a bad sign…

The inspecteur sat silently, filling out paperwork, before announcing it was time to test my vision. “Read the sign across the street.”

Squinting, I could just make out the words: “World War II Rhône American Cemetery and Memorial….”

Before I could finish reading, the inspecteur scribbled something across his note pad, tore off the sheet, and mumbled “Félicitations!”

Ornery as he was, I had the urge to throw my arms around him and plant a kiss beside his angry brow; only, the inspecteur was no longer facing me. He was staring out of the window, beyond the sign I’d just read. Lost in another place and time, his eyes rested on those quiet green fields dotted white with courage.

Kristin Espinasse writes the French Word-A-Day blog, which she began in 2002. Author of the books Words in a French Life and Blossoming in Provence, she lives on an olive farm near Bandol.