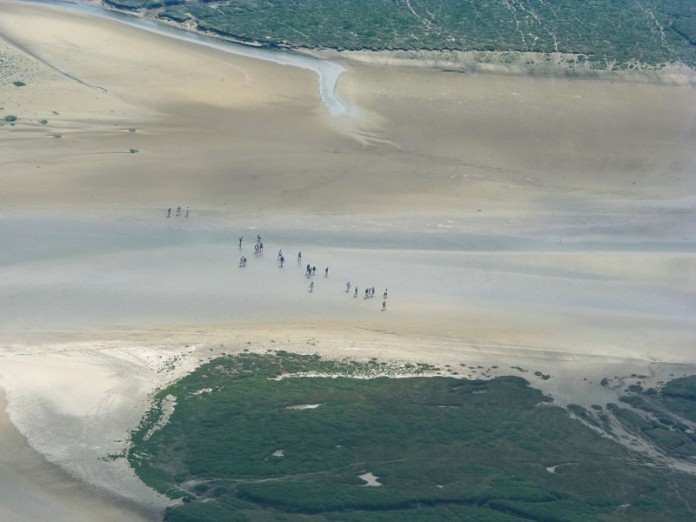 Where does the sky begin, or the water end? It’s hard to tell at low tide, when the shifting horizon of seawater and wet sand blends with the gray sky. If the sun is shining, the line is clearer, but the air shimmers and the metallic gleam of the pearly earth, gorged with water, seems to undulate in the light. At high tide, the sea is never completely transparent, so full of the sand it greedily swallows up while rushing in, and this opalescence, beige or green according to the time and season, only increases the charm of the bay.

As for a sunset on the Baie de Somme, admire its immensity as it gradually catches fire without ever losing its softness, an unforgettable sight. The large flat expanse spreads out in constantly changing shades of rose, gray, beige and pale ochre. Rain and sun often cross paths in the same day, to say nothing of the wind, never at rest, constantly shoving the clouds around, whatever the weather. It’s a paradise for birds and ducks, and admittedly for hunters too, who, respectful of nature and the law, lie in wait for them in half-submerged blinds.

It’s also a paradise for shellfish hunters on foot, who comb the shallows for the renowned, tiny crevettes grises and coques (cockles). Both are gathered as the tide recedes, when the grey shrimp are trapped in puddles and the cockles come up to breathe near the surface of the sand. It’s also home to the mouton de pré salé—granted an AOC (Appellation d’Origine Contrôlée) in 2006—the sheep that graze in “salt” fields that are covered by the sea only at the very highest tides, where such succulent, edible plants as salicorne (salicornia, sometimes called saltwort, or samphire) and oreilles de cochon (literally, pigs’ ears) flourish.

The bay also harbors a colony of nearly 200 seals, the pride of the region. These bay-dwellers had disappeared for a long time and have finally returned, proof that the pollution that had for years spoiled the bay’s natural beauty has finally been conquered. Today the Baie de Somme is a member of the very select club of the Most Beautiful Bays of the World, along with San Francisco Bay and Ha Long Bay in Vietnam’s Gulf of Tonkin.

Located 124 miles from Paris on the coast of La Manche, the English Channel, the Baie de Somme is halfway between Boulogne, France’s largest fishing port, and Le Havre, its greatest commercial and oil tanker port. The bay is an estuary, at 27 square miles the largest in the north of France, a meeting-place of salt and fresh water nearly 9 miles deep. It’s divided into two large zones: the lower, intertidal zone (l’estran), made up of sand and channels, covered twice a day by the tide, and the upper zone, composed of mollières, salt marshes situated above the average high tide level, where vegetation gradually takes over the sediment that accumulates year after year.

The border between the two zones is not fixed; muddy areas serve as intermediaries, and the marshes and dunes are the uncontested realm of migratory birds. The bay is slowly and inexorably silting in, not only because of the alluvial deposits of the Somme River, but also because the falling tide is not as strong as the rising tide, which mounts over six feet per second at the entrance to the bay—fascinating to watch but extremely dangerous for anyone surprised by it on foot. The difference between high and low tide is nearly 33 feet, and it comes in and goes out twice a day. The sea here never remains slack for long.

Far from major traffic routes, the Baie de Somme, classified as a nature preserve since 1994, has largely been spared the unchecked urbanization that occurred elsewhere in the 1960s. To the north, the bay begins at the Pointe de Saint Quentin, site of the famous Marquenterre bird sanctuary.

Next comes the small town of Le Crotoy, with its sweeping view of the sea and its beach full of speedsailers and flying kites. The port is now so choked with sand that fishing boats are little more than bits of scenery. But no matter—the sea is so far away, almost out of sight, that it creates a strange, bewitching atmosphere. Le Crotoy was launched as a resort by Pierre-François Guerlain, the famous perfumer. Although his efforts to attract the Empress Eugénie, wife of Napoleon III were in vain, nonetheless the place was at one time very chic. Jules Verne often came to write in peace, Colette spent several summers, and many painters loved it, including Toulouse-Lautrec and especially Georges Seurat. Today it’s a terrific family resort, and heaven-on-earth for children.

In contrast, on the other side of the bay, Saint-Valery-sur-Somme has remained très chic, and for the last few years it seems to be getting more so. Even deeper into the estuary and right at the mouth of the Somme, the bustling city has a small pleasure port and a perched old town, the Ville Haute, with streets of lovely half-timbered houses and remnants of its ramparts. There’s no beach, but the Somme with its locks, its dike and quays are very lively, and its fishermen’s villas and gracious Belle Epoque summer homes are very expensive. Saint-Valery is proud of having sheltered the fleet of William the Conqueror, who set out from this port for the conquest of England in 1066.

At the southernmost point of the bay lies the minuscule port of Le Hourdel and Cap Hornu, a wind-battered hamlet and tiny fishing port with an imposing lighthouse, salt marshes with grazing sheep, and a striking sense of being at the end of the world. But it attracts visitors year-round because of its permanently established seal colony, which can be viewed from fairly close up.

Finally, there’s Cayeux-sur-Mer, which is outside of the estuary. Cayeux is the world capital of beach pebbles—they’ve been gathered here for 150 years and sold for industrial purposes—so don’t expect to stroll on the sand here. A boardwalk running beside spic-and-span little beach cabins gives the waterfront a delightfully old-fashioned look.

Even more delightfully old-fashioned, the little steam train of the CFBS is a wonderful way to explore the bay. The national railroad serving the area was closed down nearly 40 years ago, but in 1970 a group of some 15 hardy souls founded the CFBS—the Chemin de Fer de la Baie de Somme. One by one, steam engines were bought back from scrap yards and restored to working condition. Recently, in response to a growing demand, the group invested in diesel engines, and last year the line carried 123,000 passengers. The association now has 250 enthusiastic members of all ages—this year one of the youngest conductors is 21 years old and his stoker, or fireman, is 18. And, a point of pride for members, the association has 16 full-time employees in addition to seasonal workers.

The trains are based in Noyelles-sur-Mer, and run on both sides of the bay, to Le Crotoy in the north and Saint-Valery and Cayeux in the south. Besides the regularly scheduled trips, entire trains can be reserved for family or professional events, and private cars can be hooked on. In summer, a dinner is served on Friday evening trains, with such success that it’s impossible to get last-minute reservations.

The Parc began in 1923, when Henri Jeanson, a rich industrialist and avid hunter, bought a 2,500-acre property on the coast north of the bay at Marquenterre—the name is thought to come from “la mer qui entre en terre”, the sea which enters the land. Jeanson’s heirs converted the land to agriculture and later horticulture, creating a 320-acre polder to plant flowering bulbs, but the dikes protecting it failed too often for the venture to succeed. Then Michel Jeanson, an amateur ornithologist, noticed that many migratory birds stopped to feed and nest on his reclaimed land, and in 1973 he created a bird sanctuary. The reclaimed land and 100 acres of dunes are now part of the 7,000-acre Réserve Naturelle de la Baie de Somme. Some 320 species of birds can been seen in the area all year long, including herons, storks, sandpipers, ospreys, teals, swifts and nightingales. No cages here, just narrow paths designed for maximum silence, so as not to disturb the birds. There are plenty of walking trails, camouflaged observation posts, and well-informed and enthusiastic guides. Absolutely not to be missed. Le Parc Ornithologique du Marquenterre

The site to visit before any others: La Baie de Somme

CFBS Steam Train Thanks to special arrangements with the SNCF, reasonably priced tickets are available from Paris, and on weekends connections to the CFBS steam train are included—combined tickets can be purchased at the Gare du Nord. website

Promenade en Baie For the past ten years or so, a handful of guides in love with the bay, great connoisseurs of its marvels and its pitfalls, have led groups on year-round discovery hikes lasting from two to eight hours, depending on the group’s ability. Many of these walks are quite easy and are open to children, and the guides are highly responsible and trustworthy. website

Biking For hardy cyclists, several bike circuits are laid out and many bike paths encircle the bay. A downloadable guide gives all the information. website

A site that covers the entire département, but includes many addresses for lodging, restaurants and activities in the Baie de Somme: Destination Somme

Originally published in the July/August 2009 issue of France Today; updated in June 2011