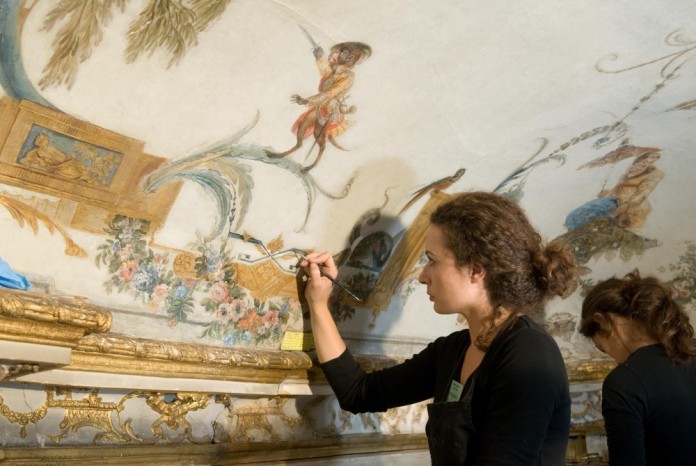 The princely domain of Chantilly, with its art-filled castle, acres of gardens and forest, palatial stables and equestrian museum, may be the centerpiece of France’s most prestigious horse country, but it’s the château’s monkeys who have grabbed headlines lately. A major renovation project restored the luster of one of the château’s most original rooms, the Grande Singerie, several years ago and a chance to see this delightful and rare example of French decorative arts is an excellent reason to visit, or revisit, this storied castle.

Despite its name, the Grande Singerie is a small boudoir. What dazzles is the remarkable series of paintings covering the room’s six wall panels, doors and ceiling, depicting singes (monkeys) dressed as humans and performing human activities in the company of elegant ladies and assorted Chinese figures. “This decor was very much in vogue in the late 17th and 18th century,” said Chantilly conservator Nicole Garnier. “There was a taste for exoticism and Chinese salons.”

And, apparently, monkeys. Long attributed to Antoine Watteau, who had painted this type of decor in his youth, the paintings are now considered the work of Christophe Huet, an animal artist who also decorated the prince’s bedchamber with more naturalistic animal paintings. Dating from 1737, when the château belonged to Louis-Henri, Duc de Bourbon and Prince de Condé, the paintings display a complex iconography that includes the five senses, several regions of the world, and the arts and sciences—there’s even a caricature of the prince himself, in the guise of an alchemist.

A careful study of the paintings reveals the overlapping themes Huet worked into his tableaux: for the five senses, the alchemist working with his equipment and gold represents sight; the musicians, hearing; the monkey holding out a letter to a lady, touch; the panel with a chocolate pot and teapot, taste; and the monkeys perfuming a lady with incense, smell. For the regions of the world, a lady in a feathered headdress embodies America; the Chinese figures, Asia; the alchemist, northern Africa; and the fragrant lady, Europe. Medallions also depict animals from those regions: the crocodile, lion, elephant and horse.

The taste for exotic decors and singeries painted directly onto woodwork became fashionable during the regency period of the young Louis XV’s reign, having been launched by Claude Audran’s decors painted for Louis XIV at his Château de Marly in 1708-09. Watteau is credited with the masterpiece of the genre, 30 paintings at the long-ago demolished Château de la Muette. All that remains of them are engraved reproductions of the decor. But Watteau also painted, for the Duc d’Orléans, Singes Peintres, a monkeys-aping-humans canvas to complement Brueghel’s Chats Musiciens. The fad took off, and singeries, Chinese and Turkish salons appeared in fashionable villas, only to succumb to changing tastes or the destruction wrought by the French Revolution. Several made their way into museums; of the few that remain in situ, only Chantilly’s has been restored to its 18th-century éclat.

The restoration, which took six months to complete, was carried out on site by a team of about 25 specialists, many of whom worked on the paintings, while others restored the room’s parquet and furnishings. The room had been in “an advanced state of deterioration” according to Cinzia Pasquali, one of the directors of the painting team, who also had worked on the renovation of the Hall of Mirrors at Versailles. The surface was dirty, humidity had caused paint layers to separate from the walls, and the woodwork had sagged and cracked in places because the building had settled. (For an idea of the task they faced, take a look at the peeling and fissured woodwork in the adjoining, unrestored room.) Many previous restorations—the first one in 1841 by the Duc d’Aumale, the château’s last private owner—also complicated the process of determining the original colors.

Once dirt was removed with a special biodegradable soap, cracks could be filled in, delicate ornamental woodwork repaired, and the lavish gilding, which had faded and been poorly repaired, restored with gold leaf using two separate processes to produce a polished effect in some places and a matte surface in others. Microscopic studies of the paintings themselves revealed the original colors, and some lovely gray and white cameos, so subtle that they had nearly disappeared over time, were also restored. The result sparkles, with each panel framed in brilliant golden filigree and the tiniest details newly visible, down to every eyelash and whisker of the cavorting monkeys.

Although the paintings are the first thing to attract the eye, the furniture is also a triumph of the restorer’s art, most notably four silk-upholstered chairs and a sofa, designed by Georges Jacob for Marie Antoinette’s bathroom at Versailles. The fire screen, with another monkey painted by Huet, was not originally at Chantilly but was acquired later at auction by the Duc d’Aumale because it went so well with the singerie decor.

Restoration as painstaking as this comes at a price—here, some €528,000. Two private organizations, the Foundation for the Safeguard and Development of the Domain of Chantilly, and the World Monuments Fund, split the cost. The Foundation, created in 2005 by the Aga Khan, is the agency that manages Chantilly for its owner, the Institut de France, under a 20-year arrangement—the Aga Khan is a local resident, and one of his thoroughbred breeding farms, Aiglemont, lies just two miles from the château. The Grande Singerie renovation is part of the agency’s ambitious restoration and maintenance program, which includes repairing the château’s foundations, an ongoing project that necessitated draining the moat. The World Monuments Fund, which supplied the other 50%, is an international organization based in New York that has combined private and public funds to help restore such sites as the temples of Angkor, the statues of Easter Island and some 25 monuments in Venice.

The Grande Singerie is not the château’s only Monkey Salon; there’s also a Petite Singerie, dating from 1735 and also by Huet, in the ground floor private apartments. It has not yet been restored, but its motifs are even more playful than those of the larger room—here the theme is the four seasons, and the monkeys are shown bathing in summer, playing cards and hunting in the autumn forest, wearing the colors of the Condé uniform. The château once even boasted a third singerie; sadly, it was destroyed during the Revolution. Outside of Chantilly, two other examples of Huet’s monkey rooms have been preserved, one in the Château de Champs-sur-Marne (currently closed for renovation) and the other in Paris, at the Hôtel de Rohan, part of the Musée de l’Histoire de France (not currently open to the public). All charming examples of monkey business à la française.

Château de Chantilly, 32 miles north of Paris. SNCF Grandes Lignes from Gare du Nord to Chantilly-Gouvieux (30 min), then turn left out of the station to take the Keolis bus marked Senlis, free within the town of Chantilly. Get off at the Chantilly-Eglise Notre Dame stop for a short walk past the stables to the château. 03.44.27.31.80. Open daily except Tue, Apr–Oct 10am-6pm; Nov–Mar 10:30 am–5 pm. €13. website

Originally published in the April 2008 issue of France Today; updated in May 2012.