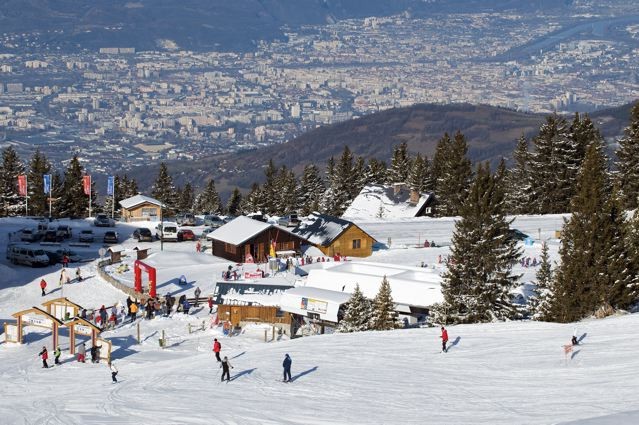 In Grenoble, wrote native son Stendhal, there is “a mountain at the end of every street”. The largest city in the French Alps, Grenoble sits at the confluence of the Drac and Isère rivers, framed by three mountain ranges: Vercors to the west, Chartreuse to the north, Belledonne on the east. Each has its own particular character: the Vercors, flat, the perfect place to click into your first pair of skis; the forested Chartreuse, crested by the Fort Saint Eynard; Belledonne, with craggy peaks that loom over the city’s rooftops like a jury of severe headmasters.

The mountains define the city, and its signature products: Vercors blue cheese, made on its namesake plateau; Chartreuse liqueur distilled by the Carthusian monks since the 16th century; and Belledonne’s houille blanche—literally white coal, but used to mean hydroelectric power harnessed from a mountain waterfall, a 19th-century technological revolution that foreshadowed Grenoble’s place in the 21st century.

The mountains sometimes also seem to define the Grenoblois character, which many fellow Frenchmen would describe as froid—but, as with the peaks themselves, sometimes you need patience to let the snow melt, revealing the warm beauty beneath.

Wandering through the streets of the old town, it doesn’t take long to notice that the average age of many passersby hovers around the 25-year mark. Students make up about 10% of the population, giving the city a young, cosmopolitan feel. Add a hefty influx of foreign scientists working at its research centers and you’ve got a major factor in the city’s dynamism. Even on the coldest nights, the bars and restaurants of the center city radiate with life, especially those serving hearty fondue, tartiflette, or gratin dauphinois.

In summer, the energy bursts out into the Jardin de Ville, the city garden, and the Place Grenette, a popular haunt since Stendhal’s day. A visit to the Place Saint André on a mild night improvises its way into many soirées—take a seat at one of the outdoor cafés and let the animation become the entertainment. It doesn’t really matter which café you choose. As the temperature rises, the outdoor tables seem to meld, turning the square into a single thronging terrace. Of course no true Grenoblois calls this oversized outdoor café the Place Saint André. If you have a date with a local resident, give him a rendezvous at la Place du Trib’.

A witness to almost 600 years of history, the imposing stone structure of the old Dauphiné Tribunal and Parliament separates the cafés and the Isère River. The Bastille in Paris comes to mind when most people think of July 14 in France, but according to local lore, the Revolution really got its start behind these Gothic and Renaissance facades. Louis XVI, in a last-ditch effort to save his throne, weakened the provincial parliaments. The Grenoble parliament was outraged, so the king dissolved it outright. In return, on June 7, 1788, the people of Grenoble took to the rooftops, stripping off the tiles and hurling them down on the heads of the king’s troops. Rethinking his strategy, the king reinstated the parliament, but it was too late. In the Château de Vizille, south of the city, the displaced politicians had already begun fermenting the idea of a republican France. Recently renovated, the old Tribunal’s sculptural work gives ample food for contemplation, best done from the Café de la Table Ronde.

A step into the renowned café, first opened in 1739, lays two centuries of artistic history at your feet. The Art Nouveau decor is a perfect setting for the menu’s regional specialties and French brasserie classics, but nothing old or stuffy has any place here. Servers bustle about as clients enjoy the company of friends, a good meal or just the view. This same atmosphere inspired composer Antoine Renard as he wrote the music to Le Temps des Cerises, the hymn of the 1871 uprising of the Parisian Commune—a lovely melody long since turned into a love song.

Late arrivals for lunch here will probably miss out on the copious menu du jour, a bargain at around €12. If the place is full, you can always stop by later for a refreshing drink following an afternoon of exploration. Over the years Sarah Bernhardt, Georges Brassens and Jacques Brel have all done so, and contemporary actors regularly stop in after a performance at the theater just across the square. Of course Stendhal was a regular here in his day too; he was born Henri Beyle, just a few steps away in the rue Jean-Jacques Rousseau, and spent part of his youth in his grandfather’s apartment on the adjacent Grande-Rue, which follows the trace of the ancient Roman main street, the cardo.

The original settlement of Cularo, founded by a tribe of Celtic Gauls called the Allobroges, later became the Roman Gratianopolis, named after the emperor Gratian. Beneath the museum in the former Episcopal Palace attached to Notre Dame cathedral, the remains of the baptistery, a 4th-century archaeological treasure, measure the city’s growth. In the chilly stone chamber where Gratianopolis’s early Christians were baptized, low ceilings and dim lighting almost resurrect the mystical past, when new believers braved bitter temperatures and an icy total-immersion purification ritual before crossing the threshold of the 3rd-century ramparts. Above ground, vestiges of those ramparts can still be found in rue Lafayette, a five-minute walk away.

The baptistery would still be undiscovered were it not for the city’s decision to develop a state-of-the-art transportation system. Adding to the tramway and bus lines that zigzag across town, the city began tearing through the Place Notre Dame to make way for a new tram line in 1988. Everyone knew the site’s potential, and the works revealed what archaeologists had hoped for. Higher up, visitors can enjoy a ride in another element in the modern transport system, the Bubbles. If you’ve strolled through the city’s shopping streets you’ve probably seen les Bulles on almost every postcard—the globular cable cars on the téléphérique that runs between the Jardin de Ville and the 19th-century fortress, Grenoble’s own Bastille, on its hilltop across the Isère. The bubbles almost inspire giggles, swinging suddenly, silently out of their stations. The cableway itself was first installed in 1934, but it was only in 1976 that the old-style cable cars were replaced by the transparent spheres that have become a symbol of this city built, as it claims, “of concrete, of metal, of glass.”

From the summit of the Bastille, peer out over the city and its sprawling suburbs. Join the exchange students looking down on the old town, trying to pinpoint their tiny apartments. Or as Paul Mistral, the city’s mayor at the time of the first cable cars, intended, just “breathe in the pure air and enjoy the incomparable panorama.”

When it comes to slopes, Grenoble offers an array of resorts for first timers, top skiers perfecting their backward 180 and everybody in between. Chamrousse, a local favorite, looks down onto the city, 4,600 feet below. Les Sept Laux pulls in the extreme sports crowd with a ski park where the intrepid can practice their tricks. Families and beginners prefer Lans en Vercors for its easy bunny slopes and low prices. No two resorts are the same, so skiers may even opt to spend their nights in town and sample several resorts during a single stay. Special bus services make transportation to and from the resorts as smooth as a downhill schuss. With the high alpine altitudes, many resorts remain open until early April for last minute skiers to squeeze in a few more downhill figures. To save time, check conditions before heading up, as spring skiing depends largely on how generously the winter powdered the peaks. No matter what the temperature, though, it’s worth noting that as the altitude rises, prices tend to follow.

And no matter the season, skiers and non-skiers alike can enjoy all the other cultural and historic facets of this dynamic city. The top spot on the cultural itinerary is the Musée de Grenoble, whose important collections extend from Egyptian antiquities and 13th-century Italian primitives to contemporary American artists including Sol LeWitt and Donald Judd; among its treasures are works by Philippe de Champaigne, Zurbarán, Ingres, Monet, Corot, Signac, Picasso, Braque and another native son, Henri Fantin-Latour. There’s also the small Musée de la Résistance et de la Déportation, documenting the very active Resistance movement in Grenoble during World War II.

Across the river, the regional Musée Dauphinois, installed in a 17th-century convent on the Right Bank of the Isère offers a collection of traditional furnishings and a section on the history of skiing; a few blocks away in the church-museum of Saint Laurent are the remains of a 6th/7th-century funerary crypt built on the site of an earlier necropole. And on the other side of town, near the Drac River and the railroad station, is Le Magasin, a national exhibit center for contemporary art housed in an immense iron-and-glass industrial hall built by the Gustave Eiffel workshop for the 1900 Paris World’s Fair, which was dismantled and rebuilt in its current location, serving as a factory and a warehouse—magasin—before finding its artistic vocation in 1986.

At the end of July, before the August vacation exodus, Cabaret Frappé takes over the Jardin de Ville, with must-hear musicians from the region and around the world. Beneath a canopy of plane trees, music fans can sample a whirlwind of musical styles. Or recline in a beach chair as local authors read their texts in the rose garden, or even try their hand at games from around the world. Anything goes at Cabaret Frappé, from urban soul to acoustic trip hop, ethnic electro and folk blues. Many Cabaret events have no admission fee, and even when admission is charged, concerts are low-priced enough to keep them accessible. “There’s one word to describe Cabaret Frappé,” says Loran Stahl, director and head of programming for the festival. “Atmosphere. People from different countries, different social classes, different races come together to share an aperitif in a good-natured ambiance. We want to keep it a people’s festival, putting culture within everyone’s reach.” website

Originally published in the March 2009 issue of France Today; updated in March 2011