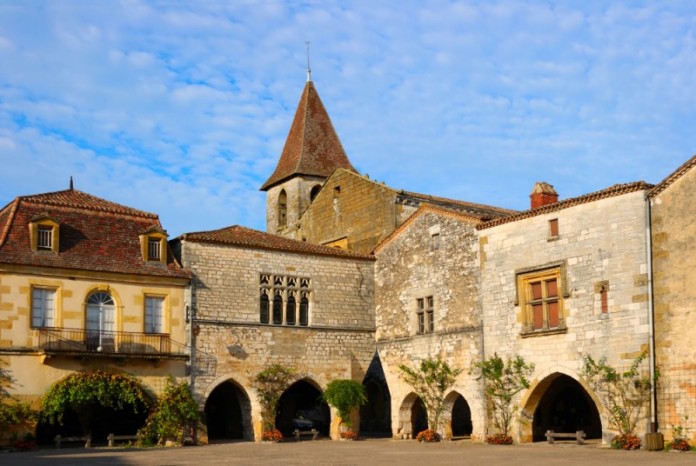 Southwest France is the number one place in the world to live if you are seeking the best in lifestyle, according to leading international real estate agency Knight Frank. The agency recently released a list of its top 10 destinations for those considering a move abroad, based on such considerations as economic and political stability, climate, accessibility, tax rates, health, education and the state of the property market.

Their accolade for the best all-round lifestyle destination goes to the southwest of France, noted especially for its excellent range of good-value-for-money properties, along with first class educational facilities and health care options. In a near-sweep, Geneva, just across the French border in Switzerland, is in second place, and the French and Swiss Alps took third. (The rest: Majorca, Monaco, Tuscany, Southern Spain, Cyprus, Algarve, Barbados.)

Anna Brown says she couldn’t agree more with the Knight Frank findings about the Southwest. She and her husband moved their family from England to Gasques, in the Tarn-et-Garonne département, eight years ago. She says they have never looked back.

“There were a lot of reasons behind why we came here. We’d established a few businesses in the UK, which we’d pushed as far as they would go. We needed a change and we just thought, ‘If you don’t try you’ll never know’,” says Anna.

They chose the area first for its enviable climate. They also admired the feeling of space when they visited. “We always get a real summer here, whereas in Devon it can rain an awful lot, and that can get you down. And the pace of life is different. It’s not so rushed. And everywhere isn’t so crowded. You don’t have to fight to get a parking space, for example,” she adds.

The Browns have set up Brunel Horses, a livery stable, and say that they were able to get a lot more land for their money than they would have found in southwest England. “Eight years ago when we arrived property was a lot cheaper, but it’s all relative, and you can still get more for your money here,” says Anna.

Knight Frank was covering its bets a bit, of course, by designating such an expansive area as top spot. Southwest France is huge, covering well over 15,400 square miles between Bordeaux and the Pyrenees on the Spanish border, where it stretches all the way from the Atlantic Ocean to the Mediterranean Sea. It is made up of three regions—Aquitaine, Midi-Pyrénées, and Languedoc-Roussillon—which include 20 départements.

The southwest is as diverse as its size would suggest. The countryside is a tapestry that changes dramatically from the majestic snow-capped Pyrenees mountains to the verdant valleys of the Basque country, the soft rolling hills of the Gers, the luxuriant vineyards of the Dordogne and the strange rocky majesty of the Causses.

Almost at its center is Toulouse, France’s fourth largest city, with a population of some 450,000 people. Known as la ville rose, or the pink city, because of the color of its distinctive brick architecture, Toulouse is a lively university town with a bustling metropolitan flavor, and the capital of the European aerospace industry, home to Aérospatiale, Ariane rockets and the Airbus.

Property in the city tends to be fairly expensive, with French Property News citing prices at €2,400 per square meter (approximately 11 square feet). Yet with its excellent transport links and international airport, apartments in the city still offer great value for money if a vibrant and cultural atmosphere is what you are after.

Many foreign buyers have chosen to live within a short drive of Toulouse, where the pace of life is gentler and their money stretches even further. Matt Hodder-Williams, Knight Frank’s expert on the southwest, said the majority of his clients tended to be looking for properties either in the Dordogne Valley (sometimes nicknamed Dordogneshire, because of its extensive British contingent), or in the Gers département west of Toulouse.

“Over the last 25 years many of our clients have chosen the area to the west of Toulouse,” says Hodder-Williams. The small towns and villages dotted along the valleys between Bordeaux and Sarlat are particularly popular, he notes, because of the area’s rich European history, its world-class wines and easy pace of life. This sector straddles the départements of Gironde, Dordogne and Lot-et-Garonne, all in the Aquitaine region, which was under English dominion for some three centuries in the Middle Ages. But if the English are the most numerous newcomers today, the Dutch and Belgians are well represented, as are Americans, who are drawn by the classic châteaux and the wine.

“If you are a wine buff then you really shouldn’t be going anywhere else,” adds Hodder-Williams. “Then there is the countryside, and the stunning hills which are really the foothills of the Massif Central, and the prehistoric caves, the food, the little village cafés in pretty squares. It’s an amazing part of France, and it’s accessible.”

The international airports of Bordeaux and Toulouse, and another smaller airport at Bergerac, all service the area. Paris is only three hours from Bordeaux on the TGV, and with the LGV (Ligne à Grande Vitesse) due to connect Bordeaux with Toulouse and eventually Nice over the next decade, the area will be more accessible than ever.

“The city of Bordeaux, which has seen a lot of investment in recent years, is the cornerstone of the area. When you add in the weather, the relaxed pace of life and the fact that property is much cheaper than other parts of southern France, you’ll find that nothing quite beats it.”

Although not so rich in vineyards, the Gers department, in the Midi-Pyrénées region west of Toulouse, is also very popular. “This is more rolling fields,” says Hodder-Williams. “But it is also where people live longest in Europe, so it must be a great place to live.”

Sometimes referred to as the French Tuscany, the Gers enjoys an even slower pace of life than the neighboring Dordogne Valley, but it’s also closer to the Pyrenees for those looking for some outdoor action.

House-hunters looking for a tranquil life gravitate to the Ariège, in the Midi-Pyrénées, which is also one of the least expensive départements in the entire southwest, with average prices of €1,400 per square meter. Sue Parr, a real estate agent with Midi-Pyrénées Propriétés, based in Le Fossat, near the historic medieval perched town of Foix, said: “People come here for the way of life. It’s very relaxed, it’s agricultural, the people are very friendly and the mountains are very close, so there’s skiing in the winter and hiking in the summer.

“We have a lot of clients from all over the world, including England, Belgium, Holland, America and New Zealand, looking for holiday or permanent homes. Since last year we have noticed that there has been a real change, and that more people are looking for permanent homes. And the clientele is getting younger too, with many young families.

“You can get work here if you want it,” she adds. “But you’re not going to get rich here. People come for the way of life.” Prices in the Ariège start at around €195,000 for a four-bedroom farmhouse with land, while a village house with a small garden is still attainable for under €100,000. Something like €450,000 can buy a large, fully renovated farmhouse with two rentable gîtes, or a chambres d’hôtes with land.

“Of course it depends where in the département you are,” says Parr. “Prices tend to go down as you get nearer to the mountains—but you can still get real value for your money.” A château with a completely renovated farmhouse on nearly 50 acres of land is currently on sale for €850,000. “We find that more and more of our clients decide to stay permanently when they get here,” says Parr. “Their only regret is that they didn’t come earlier.”